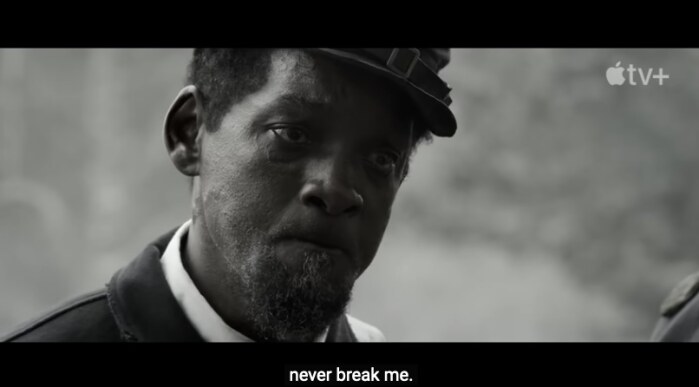 I saw the trailer for Will Smith’s new film “Emancipation.” Smith’s character Peter is the enslaved man whose terribly scarred back was photographed in 1863 and viewed by millions during the Civil War era and beyond.

I immediately thought of Governor Ron DeSantis saying, “Florida is the state where WOKE goes to die.” He was speaking, wife and kids at his side, just after the November election where he was re-elected with nearly 60 percent of the vote.

I thought of DeSantis because his law, known as the “Stop WOKE Act,” prohibits workplace training or school instruction that teaches that individuals are “inherently racist, sexist, or oppressive, whether consciously or unconsciously”; that people are privileged or oppressed based on race, gender, or national origin; or that a person “bears personal responsibility for and must feel guilt, anguish, or other forms of psychological distress” over actions committed in the past by members of the same race, gender, or national origin. (A federal judge recently blocked part of that law from being enforced.)

Iowa has a similar law (though less restrictive on curriculum), as do several other red states. At the bill signing in 2021, Governor Kim Reynolds said of our state's law, ”…it will target the teaching of critical race theory and other concepts in government diversity trainings and classroom curriculum.”

According to Collider, “Emancipation” derives from the true story of Peter, a slave who runs away from his plantation in search of his family. He travels across the Louisiana swamp while outsmarting cold-blooded hunters along the way.

Peter later joins the Union Army, and during his medical examination, they see his bare back, which has scars from a near-fatal whipping. A photo of his back was published in The Independent under the name “the scourged back.” The image displayed the cruelty of slavery in The United States. The original photo is on display in the National Portrait Gallery.

Reportedly, the film is a no-holds-barred depiction of Peter’s life. Watch the trailer to get a sample of the almost unwatchable brutality. It’s a historical thriller, directed by Antoine Fuqua.

The film opens in theaters December 2 and for streaming on Apple TV+ on December 9. I definitely intend to watch.

I’ve got to believe the film will elicit empathy for Peter and his plight. The film will convey that white Americans do bear personal responsibility for and should feel "guilt, anguish, or other forms of psychological distress” over actions committed in the past by members of the same race, gender, or national origin. I am old enough to remember Jim Crow and Ruby Bridges, the 6-year-old girl who in 1960 became the first Black child to desegregate an all-White elementary school in the South, in New Orleans.

Though politicians in Florida, Iowa, or elsewhere may wish they could stop people from watching this film, it's hard to ban something that comes into your living room on your TV.

Interestingly, in a Variety Magazine online survey of 2,350 respondents, 78 percent said they would not watch the Smith flick. Maybe because they’re still mad at Smith for slapping Chris Rock at the Oscars. Or, because 25 percent of respondents are oldsters like me. Or, because they don't want to be reminded of one of our country's "unforgivable crimes against humanity," as Rutgers history professor James Goodman termed it in a commentary for CNN.