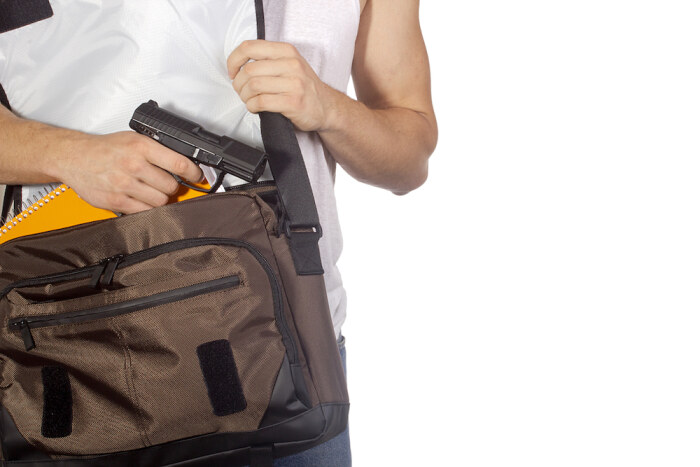 But they don’t need guns.

Back in August, the Spirit Lake Community school board unanimously passed a policy that would allow non-instructional staff to carry concealed weapons in the Spirit Lake school buildings and during extracurricular activities. Since the policy says non instructional staff, and bus drivers are excluded, that leaves arming secretaries, custodians, counselors, nurses, and administrators.

Spirit Lake was the first district in Iowa to adopt this policy. By October, the Cherokee Community School District joined them in allowing trained staff members to carry concealed firearms on campus.

The Cherokee policy doesn’t specifically exclude classroom teachers from carrying weapons. Rather, it modifies existing weapons policy to say, “Weapons under the control of law enforcement officials and staff approved by the administrative team are exempt from any ban on weapons on campus.”

In a letter to the board, police chief Shane Brevik clarified that his lack of comment on the new policy should not be mistaken for support. He said, “My professional judgment is that arming staff members is an unworkable solution which also has the real potential to provide a false sense of security for students, parents, and school personnel and interfere with law enforcement efforts in the event of an emergency.”

During my 38 years in education, I’ve seen quite a few examples of good people making bad decisions in public schools. For example, administrators go to an out-of-town seminar and come home with the “latest and greatest idea.” We called them “flavor of the month.” They rarely lasted, and they rarely were the classroom savior.

But none of those “flavors of the month" involved the deadly risk Spirit Lake and Cherokee have chosen.

Here are five reasons the good people on the school boards in Spirit Lake and Cherokee are making a bad decision that other districts should not follow.

First, guns simply don’t belong in school. The motto, “Only a good guy can stop a bad guy with a gun,” might be a cool slogan for a gun dealer or a pro-gun group, but it doesn’t fit a school and there’s little evidence the slogan is even accurate. In fact, the horror in Uvalde, Texas showed us that even highly trained police officers armed with weapons of war hesitated instead of engaging.

Many home gun deaths happen because untrained and inexperienced people grab a gun when they hear a noise they don’t recognize. As a result, they unintentionally shoot a loved one.

Second, it will take about 30 seconds for everyone at school to know who is armed. There are no secrets in a school building. If anonymity is for the element of surprise, it won’t work. Kids will know who is packing and where the weapon is concealed or stored. The loaded weapons will intrigue students, who will naturally be curious. That curiosity could kill.

Third, what if these trained individuals overreact? Sometimes kids (like adults) have emotional problems and act out by insulting or even assaulting other kids or adults. It’s disrespectful and may even be criminal, but should it carry a death sentence if someone with a gun overreacts? One student hurt or killed is one too many. Schools need to be a safe place, and weapons in the building pose an unnecessary risk.

In my job as an educator advocate, I had some tough meetings with principals and superintendents. Those meetings occasionally became emotional and over-heated. If guns had been in the mix, there could have been a whole new level of danger.

Fourth, unless these armed individuals are packing an AR-15 slung over their shoulders, they’ll be outgunned by an intruder. The most common weapon used for an attack is an assault style rife, not a pistol. A bullet from an AR-15 travels three times the speed of sound. Like the Spirit Lake police chief said, having people armed with handguns will give a false sense of security. They’ll truly be outgunned.

Finally, there are other ways to keep kids and educators safe without making our schools armed camps. Armed personnel shouldn’t be the first solution. Schools need easy access to mental health professionals. Each building needs professional school counselors. Students and faculty should be taught to say something if they see or hear anything unusual.

Schools should take seriously having people identify themselves and explain why they are wanting to enter before the door is unlocked. People need to then check in and out with the office. Most schools use these procedures, but some are haphazard at best.

Police liaison officers provided by local law enforcement could be used. There needs to be a community interest in protecting the community school.

I taught in Cherokee for seven years. It was a good place to teach, and a good place to live. But like Spirit Lake, I’m afraid the school board is looking for an easy fix to a complex problem.

Guns belong with hunters and law enforcement professionals, but not in school. The community schools were designated “gun-free zones” for a reason. The school boards in Spirit Lake and Cherokee are trying to be proactive about a real threat, but unfortunately these good people are making a bad decision.