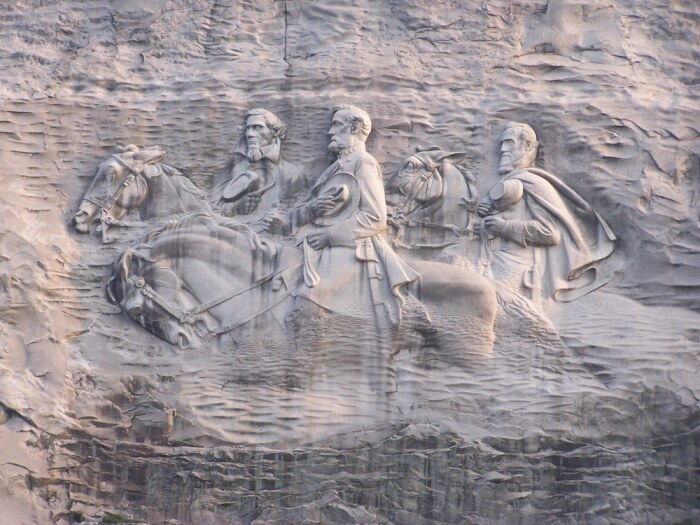 In my years, I have visited many American historical sites. When I was seven, my parents took me to the Alamo. It was 1950. My dad was a newly appointed chaplain at Lackland Air Force base near San Antonio.

If my folks knew the real history, they didn’t say. I doubt they did. We were from the North. So, the story we were told, the Alamo myth (as I now know), became the story we believed to be true.

“Yet,” say the authors of the book FORGET THE ALAMO (2021), “the legend of the Alamo is a Texas tall tale run amok. The actual story (the authors say) is one of White American immigrants to Texas revolting in large part over Mexican attempts to end slavery. Far from heroically fighting for a noble cause, they fought to defend the most odious of practices. Our newfound understanding of this history presents Americans with a long-overlooked opportunity to correct a racist myth surrounding this monument.” Read EXCERPT

To many in Texas, “the Alamo is (still) a secular shrine to conservative values on par with a Confederate monument, a metaphor made literal in 2019 when the Texas Senate specifically included the Alamo in legislation to protect Confederate monuments from removal,” as per the Washington Post (June 10, 2021).

Long before the statutes in New Orleans were taken down (circa 2017), I had been to the city and, as a tourist, took the trolley to view the imposing statues of Robert E. Lee, Jefferson Davis, and Beauregard, another Confederate general. I would have also seen the “Liberty Place” monument, a thirty-five foot tall obelisk. We had no tour guide, so I learned nothing of its significance. I had no visceral reaction.

When that obelisk was taken down, I learned it had been erected in 1891 to honor a group of white supremacists who, 20 years earlier, had initiated a clash with Black police and state militia in a battle to overthrow the Reconstruction-era government and restore White rule. The mob was successful and remained so until federal (Union) troops arrived to restore the democratically elected government. (Full story in New York Times) In other words, the obelisk stood for well over a hundred years as a constant reminder of, possibly reverance for, white supremacy.

In the late 1990s, at the Gettysburg battlefield, our tour guide told about each of the huge monuments and gave a summary of troop movements, skirmishes, and reminded us of the thousands upon thousands killed and wounded. Tourists can see where Lincoln stood to deliver his great Gettysburg Address, asking his audience so gathered to be rededicated to “the great task … a new birth of freedom.” Do tourists link the great battlefield to an enslaved mother with her child who, at the time of the battle, is sitting in a hovel in South Carolina with no hope of liberty and fearful her master will rape her or sell her child away?

It’s easy to summon outrage when viewing a film like 12 Years a Slave, which netted an Academy Award for Best Picture in March 2014. The film is based on the 1853 slave memoir Twelve Years a Slave by Solomon Northup, an African-American man who in 1841 was kidnapped in Washington, D.C. and sold into slavery. In the film, the enslaver Edwin Epps whips an enslaved female almost to death. Do visitors to Gettysburg summon the same outrage for Confederate General Robert E. Lee as for Epps? Do they understand that Lee was trying to make it safe for Epps to exercise his supremacy over the female field hand Patsey, whom he frequently raped?

I remain stuck wondering about these museums, monuments, and memorials, and the accuracy of the stories, the history, and the intentions of the memorializers.

With that same wonderment in his mind, the Atlantic Magazine staff writer Clint Smith made several trips to Germany to research how that country memorializes the Holocaust. He reports his findings and observations in a long-form essay in the December 2022 issue entitled “Monuments to the Unthinkable.” The piece (audio version included) is subtitled “America still can’t figure out how to memorialize the sins of our history. What can we learn from Germany?”

(We) have seen a shift in our understanding of the country’s history; many now acknowledge the shameful episodes of our past alongside all that there is to be proud of. But reactionary forces today are working with ever-greater fervor to prevent such an honest accounting from taking place. State legislatures across the country are attempting to prevent schools from teaching the very history that explains why our country looks the way it does. School boards are banning books that provide historical perspectives students might not otherwise encounter.

Smith’s credentials show he’s well qualified to take on this important assignment. He holds a PhD from Harvard where he focused on race, mass incarceration, and education. His book How the Word Is Passed: A Reckoning with the History of Slavery Across America, was a New York Times 10 Best Books of 2021. In the book (as per publisher), Smith leads the reader on a tour of monuments and landmarks—those that are honest about the past and those that are not—that offer an intergenerational story of how slavery has been central in shaping our nation’s collective history, and ourselves.

One example of Smith’s findings in Germany is at the Gleis (railway) 17 platform in Grunewald. Smith writes, “I looked down. Lining the tracks were steel plates. Each one had the date of a train’s departure, the number of Jewish people on board, and the camp they were sent to. I walked up to the edge of one section and read the date: 1.3.1943.”

“Next to the date,” Smith writes, “I saw 36 juden, meaning that 36 Jews had been deported on that day. Next to the number, the steel plate read Berlin – Auschwitz. I tried to imagine (says Smith) those people—maybe eight or nine families—handing over their tickets, being shuffled into the cars, and listening as the heavy doors shut behind the … I looked down again and used my foot to sweep aside a leaf; I realized that I hadn’t seen the full number. It wasn’t 36 Jews. It was 1,736 Jews … I stood there and looked at the numbers carved into the plates on either side of me. 1758 juden were deported the next day. 1000 juden had been deported just a few days prior.

I was alive on the day these horrific crimes were committed.

In Atlanta, the Apex Museum memorializes the Trans-Atlantic Slave Trade or “The MAAFA” or African Holocaust. The museum’s website says the MAAFA was one of the worst tragedies to happen to people of African descent. This exhibit presents graphic details of the enslavement of African people, “so that we may never forget the struggle they faced to gain freedom.”

When I saw the Apex exhibit, it caused me to feel anguish and distress.

Last April 2022, Georgia banned schools from teaching “divisive” academic concepts about racism, targeting the teaching of critical race theory, an academic theory that looks at structural racism. As NBC reported, Republican Gov. Brian Kemp said at a bill signing, ”Here in Georgia, our classrooms will not be pawns to those who indoctrinate our kids with their partisan political agendas.”

“I was reminded,” the Atlantic writer Smith says, “that many of Germany’s most powerful memorials did not begin as state-sanctioned projects, but emerged—and are still emerging—from ordinary people outside the government who pushed the country to be honest about its past … Americans do not have to, and should not, wait for the government to find its conscience. Ordinary people are the conscience.

“No museum (Smith concludes) can bring back millions of people. It cannot be done, and yet we must try to honor those lives, and to account for this history, as best we can. It is the very act of attempting to remember that becomes the most powerful memorial of all.”

“Ordinary people are the conscience,” said Smith. If governors like Kemp in Georgia, DeSantis in Florida, Abbott in Texas, Reynolds in Iowa, others in red states, have their way, ordinary people will be left ignorant of stories important to memorializing the truth. Bold teachers must support ordinary people in investigating the historical truths of the land on which their community stands. Students can do the same.

In a podcast, the writer Clint Smith talks with The Atlantic editor Jeffrey Goldberg about his essay and its implications for America. The Big Story: What America Can Learn From Germany About Atonement

Smith also appeared on the NPR show Fresh Air (December 1, 2022) to talk about his article and the important understandings he can share.

The National Memorial for Peace and Justice

More than 4,400 African-American men, women, and children were hanged, burned alive, shot, drowned, and beaten to death by white mobs between 1877 and 1950. Millions more fled the South as refugees from racial terrorism, profoundly impacting the entire nation. Until now, there has been no national memorial acknowledging the victims of racial terror lynchings. On a six-acre site atop a rise overlooking Montgomery, the national lynching memorial is a sacred space for truth-telling and reflection about racial terror in America and its legacy.