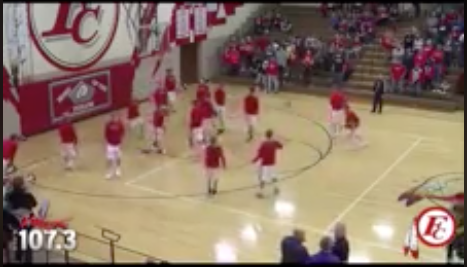 Iowa sports announcer: "As Trump would say, go back where they came from"

Eagle Grove resident Betty Jo Willard posted what she rightly called the "absolutely appalling!!" clip on Facebook on December 3. The banter illustrates how President Donald Trump has emboldened bigots across the country to express racist views.

The comments were "broadcast on The Cube, an online video service many local high schools use," before the November 28 game, KIMT reported this morning.

My partial transcript, from the video Willard shared.

Harris: They have a lot of--apparently--

Kusserow-Smidt: Gee, I wonder why that is.

Harris: I wonder why.

Kusserow-Smidt: But the latest there is that they're just going to gradually come into town. Yeah, right.

Harris: Gradually work their way in.

Kusserow-Smidt: Gradually work their way in. So who are these people again?

Harris: Yeah. Who are they? Oh, you want to know the names? [repeats names of three Eagle Grove basketball players]

Kusserow-Smidt: Well, they sound like they've been here a while, given the first names.

Harris: Yeah, I think they've been there. [repeats and spells one of the surnames] Then there's [names another player]--sounds like he's not a foreigner. Could be, though.

Harris: They're all foreigners.

Harris: Yeah--as Trump would say, go back where they came from.

Kusserow-Smidt: Well, some would say that, yeah. Some days I feel like that too.

On Tuesday, November 28th, two employees of KIOW made comments that were insensitive, thoughtless and degrading to others. These comments were deplorable, and the staff and management of KIOW in no way condones or supports these comments.

These comments never aired on KIOW Radio. They did, however, appear on a video feed that appeared on a school website.

That night when we learned of these comments, we were in contact with the Eagle Grove School District and gathered information about the incident. On Thursday morning, November 30, a letter of apology was sent to school officials, along with details of our actions in regards to the two employees involved.

As a result, one employee was fired from her position with the station, and the other was placed on indefinite suspension.

KIOW Radio has a long history of promoting and supporting student athletes, coaches and schools. As a company, we take great pride in spotlighting the great efforts of our local citizens, schools and communities, and we will demand that all company employees adhere to this policy.

The remarks by Harris were just as bad as his colleague's, if not worse. Why was he merely suspended rather than fired? Perhaps he was enjoying a perk of being a beloved sports announcer; KIMT identified Harris as "a longtime voice of Forest City athletics."

Presumably others had the same question, because KIOW updated its statement about an hour ago to clarify, "As a result, both employees have been fired from their positions with the station."

In a December 4 statement, Eagle Grove superintendent Jess Toliver confirmed that the radio station had apologized to his school district. He added, "we expect our athletes, students and community to be treated with respect no matter where they go. The kids were aware of it, the people listening to The Cube were aware of it." Toliver also noted "the positives of diversity. Without diversity, we have a lot less students, we aren’t as vibrant. Diversity has been something that has saved our community."

Latino residents have helped keep schools open in many Iowa towns, since the median age of our state's Latino population (23.5) is substantially younger than the median age of Iowa's entire population (38.0). The latest available data show that about 11.3 percent of Wright County residents are Latino, as of 2016. Nearby Winnebago County was only about 4.3 percent Latino. Eagle Grove school officials expect "rapid, increasing enrollment" following construction of a large Prestage pork processing plant. The meatpacking industry has contributed to Latino population growth in many rural Iowa counties.

What happened in Forest City wasn't the first time Iowa kids had to hear racist comments during a high school athletics event, and it probably won't be the last. But here's hoping school leaders across the state will seize this teachable moment to remind students, staff, and supporters that bigotry is never acceptable--neither within a community, nor directed toward sports rivals.

UPDATE: Speaking to KIMT on December 4, Harris said he feels "absolutely terrible": "I’m sorry. I’ve disappointed all my family and friends." Board operator Kusserow-Smidt "has been placed on administrative leave by the Forest City School District, where she is a teacher." A statement from the school district apologized "that the inappropriate conversation was streamed over The Cube" and noted, "The communication that took place during this broadcast is inconsistent with the policies and values of Forest City Schools. We expect all staff to hold the same values that we teach in our education system every day."

P.S.- The casually racist way Harris and his colleague discussed the demographics of Eagle Grove reminded me of this recent article by Harvard Professor Ryan Enos. His research found signs of more "racially motivated voting" in 2016 in areas with a certain "social geography."

It is the presence of a group that is proximate, yet segregated — close but far — that precipitates the politics of division. Sadly, it is when groups become close in space that they also can become politically, social, and psychologically divided, so long as also they remain segregated. This kind of relationship, the research shows, causes us to hold negative and racist attitudes about the other group: to not want to share with the other group, and, when it comes to politics, to vote against the candidate we think represents that group — or for the demagogues who attack them.

And this very situation — think a racially diverse central city and homogeneously white suburbs or an enclave full of newly arrived immigrants — is a geographic reality for most Americans. [...]

You might assume that demographic change, and the proximity of different groups, would by itself breed familiarity. It turns out that’s true only in the rare cases in which those groups are integrated. When spatial patterns other than integration develop, diversity can drive us apart.

Consider how the 2016 election played out. Most white voters supported Trump and were at least willing to tolerate his xenophobic rhetoric, but his support disproportionately came from those who lived in places where the Latino population had rapidly expanded — whose social geography had changed. Many of these places experiencing a Latino boom were in states, such as Pennsylvania, crucial to Trump’s Electoral College victory. For example, in Luzerne County, Pennsylvania, where the Hispanic population grew by almost 500 percent in the last 20 years, Trump’s vote increased by over 11 percentage points from Romney in 2012, taking it from a blue to a red county.

Thank you everyone for your sympathy. I am proud to be Hispanic and of my background culture. I don't want Mr. Harris to be known for his devastating remarks. He made a terrible decision, I accept his apology and want him to move on with his life as I will with mine. #EGSTRONG

LATER UPDATE: The Forest City School Board accepted Kusserow-Smidt's resignation and approved an early retirement package for her, Steve Bohnel and Ashley Miller reported for the Mason City Globe-Gazette on December 8. In her resignation letter, Kusserow-Smidt said she had planned to retire at the end of the current school year, her 43rd working for the district. She said she was "deeply saddened" to finish her career this way.

In these doesn't-reflect-who-I-am apologies, people never explain why they would say such hateful things to anyone, even in private, if the comments weren't consistent with their views.

LATE UPDATE: The Des Moines Register's John Naughton reported, "Boys' and girls' basketball players and cheerleaders from Forest City and Eagle Grove stood in alternating positions and held hands on the court during the National Anthem" before teams from the two schools played against each other on January 9. "After the games were played, students ate pizza together. KIOW provided the food."