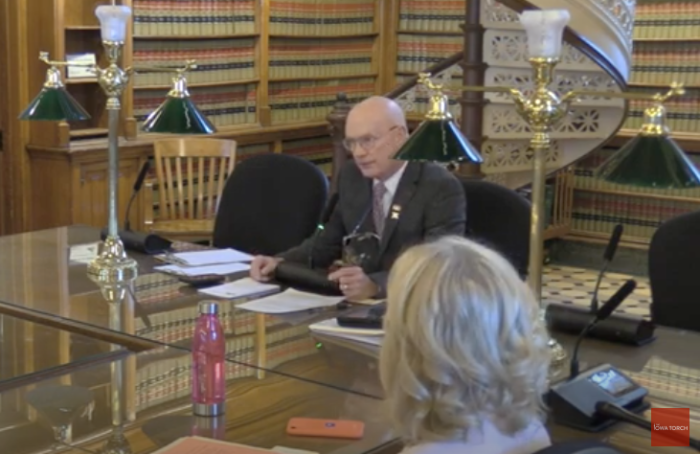 Iowa Republicans have enacted most of their legislative agenda with little trouble during the past four years of full control of state government. But a few priorities eluded them, including a constitutional amendment that would pave the way for future abortion bans. Unable to find 51 votes in the state House for that measure last year, the GOP settled for mandating a 24-hour waiting period before all abortions.

The 2020 elections increased the GOP's majority in the lower chamber from 53-47 to 59-41. Republicans didn't waste time returning to unfinished business: a new version of the attack on reproductive rights cleared an Iowa House Judiciary subcommittee on January 19.

STRIKING AGAINST THE IOWA SUPREME COURT

House Study Bill 41 proposes to add the following language to Article I of Iowa's constitution:

Sec.26. To defend and protect unborn children, we the people of the State of Iowa declare that this Constitution does not recognize, grant, or secure a right to abortion or require the public funding of abortion.

Sec.26. Protection of life. To defend the dignity of all human life, and to protect mothers and unborn children from efforts to expand abortion even to the day of birth, we the people of the State of Iowa declare that this Constitution shall not be construed to recognize, grant, or secure a right to abortion or to require the public funding of abortion.

The goal is to overturn a 2018 Iowa Supreme Court majority opinion, which held that the state constitution protects a woman's right to terminate a pregnancy. In that case, five justices found that a 72-hour waiting period for all abortion procedures "violates both the due process and equal protection clauses of the Iowa Constitution because its restrictions on women are not narrowly tailored to serve a compelling interest of the State."

Conservative Justice Edward Mansfield speculated in a dissenting opinion that the majority may have laid the groundwork for a future holding that the state constitution requires Medicaid funding of abortions.

Governor Kim Reynolds has already replaced four of the five justices who struck down the waiting period, and she will appoint a successor to the fifth (Brent Appel) after he reaches the mandatory retirement age in 2022. Many observers believe the current Iowa Supreme Court will overturn its 2018 precedent when it considers litigation over the 24-hour waiting period Republicans enacted last year. GOP lawmakers repeated points from Mansfield's dissent during floor debate over that legislation.

Nevertheless, Republicans are not waiting to see how the newly configured court approaches abortion restrictions. Some GOP politicians have claimed the amendment is "neutral" on abortion or would not restrict the choices of pregnant Iowans. In reality, its sole purpose is to make it virtually impossible for justices to strike down even the most extreme abortion ban Republicans may pass in the future.

Subcommittee meetings are often the only opportunities for members of the public to comment on pending legislation in Iowa. When restrictions to abortion are on the agenda, the rooms are typically packed with supporters and opponents.

Due to the COVID-19 pandemic, the Iowa Senate is holding subcommittee meetings via Zoom this year and allowing speakers to participate remotely. However, Iowa House Republicans require in-person attendance for anyone who wants to express an opinion about a bill in a subcommittee. Members of the public may submit written comments, but legislators are not required to read them, nor is there any way to have those comments read out loud during the hearing.

To reduce the risk of coronavirus spread, reproductive rights advocates are discouraging demonstrations or gatherings at the state capitol building, where Republican leaders do not require legislators, staff, or visitors to wear masks.

Conservative activists are generally less concerned about COVID-19 safety protocols. Consequently, when Holt convened a subcommittee on House Study Bill 41 on January 19, no members of the public turned up to speak against the proposal. In contrast, a steady stream of unmasked people showed up to commend Republicans for taking up the anti-abortion amendment.

State Representative Beth Wessel-Kroeschell was the only opponent of the bill to speak. Without warning her in advance, Holt limited her speaking time to two minutes, which is unusual. She observed, "If we truly valued all life," including those over age 60, everyone around the table would be wearing masks. (Holt and GOP State Representative Anne Osmundson, the third subcommittee member, were unmasked.)

Wessel-Kroeschell said legislators should be talking about Iowa's rising maternal death rates and access to prenatal care. "Instead, we're talking about taking away the most basic of freedoms" from women. Wessel-Kroeschell said she trusts women to make decisions about their own health and described the proposed amendment as "reckless" and "insulting," as well as dangerous for women. The state constitution should not be a place for discussing medical procedures, in her view.

When it was her turn to speak, Osmundson challenged Wessel-Kroeschell's assertion that health care is "the most basic freedom." In her view, "the most basic freedom is life." Osmundson then shifted gears, arguing that the bill was "not necessarily about life" but was about "the judges overstepping their boundaries, taking away the freedom of Iowans." She argued that a majority of Iowans "don't want to pay for other people's abortions" (which hasn't happened for decades). "This amendment allows the people to have a voice," she concluded.

Holt defended his decision not to wear a mask during the subcommittee, saying participants were socially distanced in the room. He said he always wears a mask when he's not socially distanced. (Droplets containing COVID-19 can spread further than six feet, particularly in enclosed spaces.)

The subcommittee chair argued, "I believe we need this amendment because the people of Iowa and not unelected judges of the Iowa Supreme Court should decide how Iowa regulates abortion." Holt warned that taxpayer-funded and late-term abortions could come to this state if the court's 2018 decision were allowed to stand.

Holt and Osmundson signed off on sending the bill to the full House Judiciary Committee, where Republicans will surely approve it in the coming weeks. UPDATE: The committee members approved the bill along party lines on January 20, making the measure eligible for floor debate.

The bill should easily have enough votes to pass in the full chamber. Only two of the three Republicans known to oppose the constitutional amendment last year (Lee Hein and David Maxwell) are still serving in the Iowa House.

I'm not aware of any Iowa Senate Republican who might oppose this measure, so it's certain to pass the upper chamber, as last year's version did along party lines.

Reproductive rights advocates slammed today's action by House Republicans, as well as the ground rules that required members of the public to risk their health in order to speak to lawmakers. Jamie Burch Elliott, Director of Public Affairs for Planned Parenthood Advocates of Iowa, said in a written statement, "Let’s not kid ourselves. This is a coordinated attempt by anti-abortion politicians in Des Moines to ultimately ban safe and legal abortion in Iowa." She added, “These extremist lawmakers have made it clear they care more about taking away the reproductive freedoms of Iowans than tackling the hard issues facing Iowa, like the pandemic and violent attacks on our democracy.”

Despite the current balance of power at the statehouse, Republicans are a long way from achieving their ultimate goal of banning abortions.

Amending the state constitution is a much more lengthy process in Iowa than passing a law. First, two separately elected legislatures must approve identical language. That means Republicans must hold both chambers in 2022. Then the House and Senate would need to pass an anti-abortion constitutional amendment again in either 2023 or 2024. Then the amendment would go on a statewide ballot in 2024. The language would be added to the state constitution only if a majority of voters approve.

If Republicans had pushed this amendment through both chambers last year, they would have needed to pass it only once more (this year or next) to get it on a statewide ballot in 2022. Moreover, abortion opponents would probably have a better chance of winning such a referendum in a midterm election year, when Republican turnout may be high in reaction to Joe Biden's presidency and actions by the Democratic-controlled Congress.

As things stand, the soonest Iowa voters could weigh in on this amendment would be in 2024. While it's impossible to predict the political atmosphere so far in advance, turnout among Democrats, younger voters, and independents--all groups that tend to support abortion rights--is typically far higher in presidential election years.

The same poll asked about the proposed state constitutional amendment and found that 54 percent "oppose the change to specify that the Iowa Constitution does not recognize a right to abortion or require public funding of it." Just 33 percent of respondents said they supported the idea, and 12 percent were unsure.