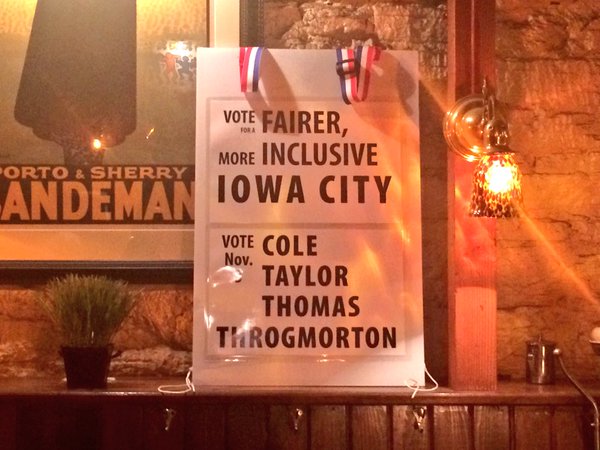 What election results were you watching tonight, Bleeding Heartland readers? I was excited to see the "Core 4" progressive slate sweep the Iowa City council elections, despite a well-financed campaign for the rival group, representing Chamber of Commerce types who have long dominated local government. John Deeth described what was at stake in those races, and Tom Carsner put it succinctly in a letter to the Iowa City Press-Citizen:

The “growth at any price to grow the tax base” philosophy of the present council majority puts Iowa City at financial risk when one TIF-financed Big Bang project turns south. A series of smaller investor-financed mixed use — business and residential — projects can energize multiple neighborhoods and build a more reliable and sustainable tax base.

[...] I urge Iowa City to welcome the just, equal, affordable, inclusive and sustainable growth vision presented by John Thomas, Rockne Cole, Pauline Taylor and Jim Throgmorton. Vote for them to shake loose the scared establishment of the present City Council.

UPDATE: In his analysis of the Iowa City results, Deeth sees outgoing Mayor Matt Hayek's "ham-handed editorial" in the Iowa City Press-Citizen on October 14 as "a turning point in the campaign." Bleeding Heartland user corncam points to another factor that may have helped the "Core 4."

Davenport voters resoundingly elected Frank Klipsch mayor, ousting incumbent Bill Gluba by more than a 2: 1 margin. It's the end of a long political career for Gluba, who won his first election (to the Iowa legislature) 45 years ago. Gluba was an activist even before running for office, participating in the 1963 march on Washington for civil rights. His handling of some local controversies this year, including his role in forcing out Davenport's city manager, prompted the Quad-City Times to endorse Klipsch, a former CEO of the local YMCA who has a "reputation for bringing diverse groups together" and a "more collaborative style."

In my own corner of the world, I was pleasantly surprised that challengers Threase Harms and Zac Bales-Henry CORRECTION: Only Harms won her seat outright. Bales-Henry will have to face Charlene Butz in a December 8 runoff election. Butz and Dave Burgess were frequent "no" votes on any kind of change or progress, and Butz was a particularly dedicated opponent of new sidewalks on streets where they are badly needed. Bales-Henry promised to work to "Create a more efficient and walkable neighborhood [...] and ensure that each citizen can walk, run or bike to any location within city limits safely and easily," as well as trying to improve the local trails system. Harms also expressed support for new sidewalks on key city streets. You never know what could become a hot-button issue in local politics, and the sidewalks question has been one of the most divisive issues in Windsor Heights over the past decade. UPDATE: The anti-sidewalks voters may come out in force for the December 8 runoff, but even if Butz is re-elected, there might be enough votes for change, because two of the incumbents who were not on the ballot this year (Steve Peterson and Tony Timm) have expressed support for new sidewalks in the past.

My son and I stopped at Harms' home while trick-or-treating on Friday. When I mentioned that I'd seen lots of her yard signs around town, she responded, "Yard signs don't vote." Right answer! Clearly she knows how to GOTV, because she finished way ahead of the rest of the field in our at-large elections. That's a rare accomplishment for a first-time candidate running against incumbents.

UPDATE: I was sorry to see that Cedar Rapids residents rejected a levy to fund public libraries. Todd Dorman covered the campaign for library funding over the weekend.

Voters in Des Moines re-elected Mayor Frank Cownie and the city councillors who were on the ballot. I didn't realize that Cownie is now the longest-serving Des Moines mayor. In the most hotly-contested race, the open seat in Ward 2 on the east side of Des Moines, turnout was down and Linda Westergaard, backed by business interests including a realtors' lobbying group, defeated Marty Mauk.