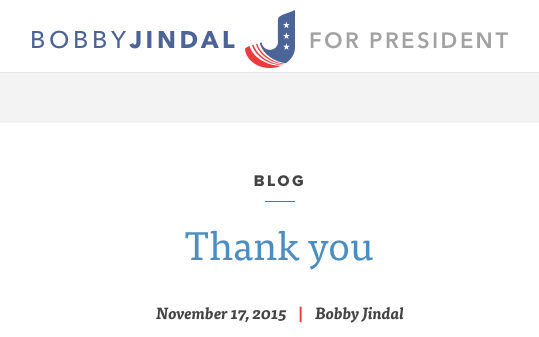 Louisiana Governor Bobby Jindal suspended his presidential campaign today, acknowledging that "this is not my time." I enclose below the full text of his "thank you" message.

Jindal had visited Iowa 27 times, spending all or part of 74 days here since the beginning of 2013. Republican audiences generally received him favorably, despite his disastrous record as governor. His riff on "hyphenated Americans" was a crowd-pleaser, as was his assertion that "Immigration without assimilation is an invasion." But in a crowded field with at least half a dozen candidates targeting the social conservative niche, Jindal didn't have a lot of money to raise his profile through direct mail or paid advertising. Nor did he have a path to the main debate stage, since television networks have made the cut using national polls rather than surveys of Iowa Republicans.

Jindal had been scheduled to visit Iowa again this week, including an appearance at the FAMiLY Leader's Presidential Family Forum. I suspect Representative Steve King's endorsement of Senator Ted Cruz yesterday factored into the governor's decision not to waste his time on that event. Although the FAMiLY Leader has showcased Jindal's illegal efforts to defund Planned Parenthood in Louisiana, it appears to be a foregone conclusion that Bob Vander Plaats will jump on the Cruz bandwagon.

Any relevant comments are welcome in this thread. Douglas Burns interviewed Jindal for his latest "Political Mercury" column in Cityview. It's a good read and a reminder of why some had speculated Jindal might become this cycle's social conservative peaking at just the right time before the Iowa caucuses.

UPDATE: Added below some reaction and commentary to Jindal dropping out.

I don’t regret my decision to endorse Governor Jindal. He was one of the best qualified candidates in terms of policy, principles and accomplishment.

I knew he was going to be a long shot, but I did feel Iowa was a possibility and that he would stay in the race until then. He said as much, but I understand that circumstances change and he was in a spot where he could not move on and he had to make a decision. I’m disappointed, but I can respect that.

I am disturbed by this trend that somehow experience and expertise disqualifies one from being President. I believe it is a standard that we could very well regret.

The Republican National Committee did voters a disservice through their national polling criteria for debates. The debates have driven the media attention which drives polling due to name recognition which drives further media attention which impacts fundraising. Frankly, it has turned our nominating process into a popularity contest. I’ve also been disappointed by some who have bowed to the altar of electability and had the audacity to chastise me for backing a candidate who they deemed to be “not electable” they should know better.

Now it seems for any candidate to have a chance they have to already have established name recognition and money before the race begins. This current trend also rewards those who spend the least amount of time in Iowa and New Hampshire. That does not do the Republican Party any good.

Vander Hart glosses over the fact that Jindal is extremely unpopular in his own red state. Even the Republican candidate for governor David Vitter has distanced himself from him, including during last week's debate against his Democratic opponent for the runoff election.

Jindal was really rather nice and funny in person and he worked Iowa hard, which is always appreciated, if not always rewarded. But he was also exceptionally scripted, perhaps the most on-message of any candidate. That can be off-putting at times, and makes you wonder if the friendly persona is part of an act as well.

He also ran a campaign that seemed designed at appealing to the lowest common denominator, forgoing his own educated background and history of advocating for the Republican Party to rise above such simple-minded nonsense. His repeated criticism of people of color who hyphenate their nationality and call themselves “African-Americans” or “Indian-Americans” was unbelievably offensive, aimed solely at appealing to racists, and perhaps a way to help white evangelicals overlook Jindal’s own heritage. It also makes you wonder about his own psychology that he would so publicly reject and denigrate his background. For that alone Jindal’s campaign should be shunned for its small place in caucus history. [...]

He seemed like a pleasant, genuine person at times, but then would go into full robotic mode where you could basically press play on his stump speech and know what was coming. You could tell there was a larger intellect there, and a sense he was a different kind of leader at heart, but ran a campaign based on fear-mongering and easy, simplistic red-meat applause lines. Who knows what Jindal was.

Matt Lewis declared the Rhodes scholar Jindal "too smart to win" in his piece for the Daily Caller:

Jindal recently said: “There is a tendency among the Left and some Republicans that say you can either be conservative or smart.” He was absolutely right. But instead of fighting this trend, Jindal decided to embrace it. In order to try to win the Republican nomination, he decided to play dumb. It felt inauthentic and (compared to Trump and Carson) inadequate.

The danger of a Too Dumb to Fail mentality isn’t simply that it elevates the populist demagogues who like to hurl red meat—it’s also that it forces otherwise smart conservatives to choose between playing dumb or going home. And, in the case of Jindal, he did both.

I cannot tell you what an honor it has been to run for President of the United States of America. My parents came to this country 45 years ago searching for freedom and a chance.

When I was born, we lived in student housing at LSU, and never in their wildest dreams did they think their son would have the opportunity to serve as Governor of Louisiana or to run for President.

They raised me to believe Americans can do anything, and they were right, we can. But this is not my time, so I am suspending my campaign for President.

One of the things I will do is go back to work at the think tank I started a few years ago – where I will be outlining a blueprint for making this the American century.

We must show the way forward on growing our economy and winning the war against terror, and especially defeating radical Islam.

I realize that our country is off on the wrong track right now. Everyone knows that, but don’t forget, this is still the greatest country in the history of the world – and every single one of us should start every day by thanking God that we are fortunate enough to be US citizens.

Now is the time for all those Americans who still believe in freedom and American exceptionalism to stand up and defend it. The idea of America – the idea that my parents came here for almost a half a century ago – that idea is slipping away from us. Freedom is under assault from both outside our borders and from within. We must act now, we do not have a moment to spare.