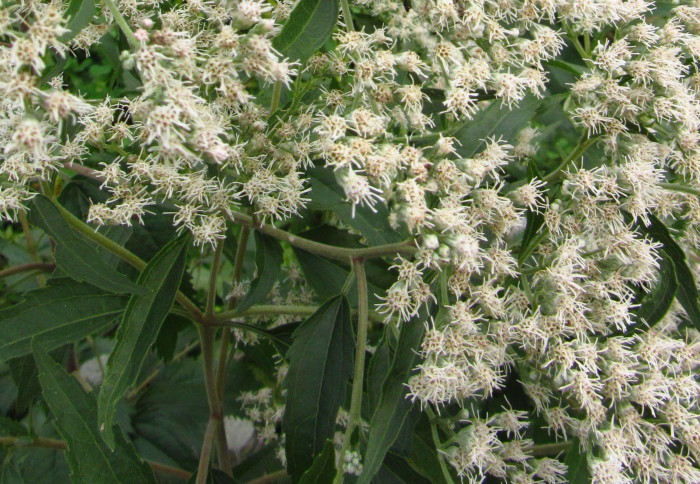 The first snow since last winter is expected to hit much of Iowa this weekend. Next week's edition of Iowa wildflower Wednesday will be the last before this series goes on hiatus until the spring. Click here for Bleeding Heartland's full archive of wildflower posts since March 2012, depicting more than 115 native plants and a few European invaders.

As its name suggests, late boneset (Eupatorium serotinum) blooms relatively late in the year. This plant is native to most of the U.S. east of the Rocky Mountains. The Illinois Wildflower website explains,

The delicate flowers of Late Boneset closely resemble the flowers of other Bonesets, such as Eupatorium altissimum (Tall Boneset) and Eupatorium perfoliatum (Common Boneset), in both color and structure. These Bonesets can be distinguished readily from each other by an examination and comparison of their leaves. Tall Boneset has leaves that are pubescent, more narrow, and less coarsely serrated than Late Boneset, while Common Boneset has leaves that wrap around the stem and are without petioles.

Bleeding Heartland featured common boneset here. The stem appears to be growing through (perforating) the leaves. After looking at tall boneset leaves pictured on the Illinois Wildflowers or Minnesota Wildflowers websites, I am fairly confident I photographed late boneset plants.

I took all of the shots enclosed below between late August and mid-October near the north or south ends of the Windsor Heights bike trail. Some late boneset plants are growing in the small prairie patch in Colby Park. Many more are thriving in the larger patch of native plants behind the Iowa Department of Natural Resources building on Hickman Road.

As usual, the Illinois Wildflowers site is a good resource for a botanically accurate description of late boneset foliage and flowers. The plant is "common in disturbed areas" and favors "moist black soil prairies, moist meadows near rivers, swamps, areas near drainage ditches, low-lying areas along railroads and roadsides, pastures, and abandoned fields." It is a food source for many varieties of bees, wasps, flies, butterflies, moths, and beetles.

Here's a close look at the non-hairy, serrated leaves that distinguish late boneset from its close relatives:

Common boneset was starting to bloom near the end of August, but the late boneset buds were not open yet on this plant or on others growing nearby.

A relatively short late boneset plant blooming next to a black-eyed Susan.

Late boneset, some kind of white and yellow aster, and some kind of goldenrod plant, growing intertwined. Brown-eyed Susans are visible in the background.

On a cool day (temperature in the 40s), a grasshopper perched on a late boneset plant seemed to be stupefied. I couldn't believe how close it let me get without jumping away.