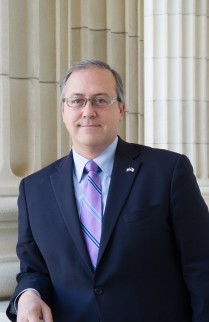 Some Iowa Republicans will take a stand for the full equality of LGBT people, or at least vote not to allow discrimination based on sexual orientation.

Some Iowa Republicans search for workarounds so that states or private entities can refuse to acknowledge LGBT equality in matters large and small.

On May 18, the U.S. House had approved the National Defense Authorization Act for fiscal year 2017. All three Iowa Republicans voted for the legislation, while Democratic Representative Dave Loebsack voted against it (roll call). As Jennifer Bendery explained in this Huffington Post article, the defense authorization bill included "a provision that would allow federal contractors to fire employees for being lesbian, gay, bisexual or transgender."

Yesterday, during House floor debate on a budget bill for the Department of Veterans Affairs and military construction projects, Democrat Sean Patrick Maloney of New York offered an amendment "that would have effectively barred federal contractors from getting government work if they discriminate against the LGBT community." Cristina Marcos and Mike Lillis reported for The Hill,

Initially, it appeared Rep. Sean Patrick Maloney's (D-N.Y.) amendment had passed, as 217 "yes" votes piled up over 206 "no" votes when the clock ran out. The measure needed 213 votes to pass.

But it eventually failed, 212-213, after a number of Republican lawmakers changed their votes from "yes" to "no" after the clock had expired.

GOP leaders held the vote open as they pressured members to change sides. Infuriating Democrats, they let lawmakers switch their votes without walking to the well at the front of the chamber.

"Shame! Shame! Shame!" Democrats chanted as they watched the vote tally go from passage of Maloney's amendment to narrow failure.

One of the seven vote-switchers was our own David Young. I haven't seen any public statement explaining his decision and am seeking comment.

Rachael Bade, Ben Weyl, and John Bresnahan reported for Politico that Republicans are trying to spin the climbdown as a vote for the troops:

"The members who switched are going to hold a very special place in American history as the people who didn't have the guts to stand up and support the will of the House," Maloney said off the chamber floor after the vote. "They literally snatched discrimination out of the jaws of equality."

A GOP aide on the floor at the time said Maloney was actually the instigator, telling POLITICO that he came over to the Republican side and was angrily taunting conservatives for their votes. Republicans are saying privately that if the amendment had passed, it would have killed the appropriations bill because Republicans would no longer vote for it.

"Our veterans and troops were prioritized over a political messaging amendment that could have jeopardized the final passage of the appropriations bill," said Speaker Paul Ryan's spokeswoman AshLee Strong in a statement.

If you believe businesses should be able to discriminate against LGBT Americans, using the owners' religious convictions as a cover, own that (wrong) opinion.

If you believe businesses should not get an exemption from civil rights code, own that opinion.

Pretending to be moderate, then bending to your party leaders won't earn respect on either side of the debate.

I enclose below some reaction to yesterday's vote. Regardless of who wins the three-way Democratic primary in Iowa's third Congressional district, voters will hear much more this fall about Young's profile in cowardice.

P.S.- Young did cast one honorable vote yesterday, for a Democratic amendment that would restrict Confederate flag displays in military cemeteries. Loebsack also supported that amendment (roll call). Most House Republicans voted against it, including Iowa's Representatives Rod Blum and Steve King.

The VA and military construction appropriations bill passed by 295 votes to 129 (roll call). All four Iowans voted for it on final passage.

UPDATE: Young's office has not responded to my request for comment, but his spokesperson told the Des Moines Register, "The Congressman's recorded vote today was both consistent with his position and previous recorded votes on this issue."

“This is a day and a vote that Iowans will remember in November. Iowa’s 3rd district deserves a member of Congress who will decry discriminatory legislation, not embrace it. Iowa has led the way on many non-discrimination protections in education, employment, and housing. We expect our elected officials to fight back against exclusionary policies, not crumble under partisan pressure.
Rep. Young failed to stand up for his constituents today, and his vote does not represent the values of his district. Democrats will wage a strong campaign to ensure that we send a representative who protects all constituents from discrimination laws and prejudicial policies.”

Rep. David Young just voted for a bill that would make it legal for government contractors to fire people for being LGBT. That's absolutely unacceptable and another reason why I'm ready to make him a one term Congressman.

Sherzan added in a statement,

Congressman Young’s cowardly vote to discriminate against LGBT Americans today was shameful and Iowans deserve much better. In Congress, I’ll fight to make sure all Iowans, no matter who they love, are treated equally.

Statement from Jim Mowrer's campaign, May 19:

David Young was the deciding vote to kill an amendment today that would not allow discrimination against the LGBT community. After initially voting in favor of the amendment Congressman Young changed his vote to kill the amendment and ultimately defeat it. This was a straight up or down vote for an amendment with no other items attached to it. There is even video of David Young going down into the well on the floor of the House and then the votes change.

"David Young's vote today to allow unjust discrimination of the LGBT community in Washington and his home State of Iowa shows a direct lack of leadership and gross negligence in support of the GOP's plan to undo the work of the current administration. We need Jim Mowrer in Congress for this exact reason. Jim will continue to listen, support and combat the issues the LGBT community faces in the ongoing fight for full equality." Said Michael Weeks, LBGT Outreach Chair for Jim Mowrer’s campaign.

“We are disappointed that a majority of the Iowa delegation rejected the legislation, and we are especially disappointed in Rep. Young. He had an opportunity to exhibit Iowa values of decency and fairness. For a moment, he did, but then changed his vote to stand with Rep. King and Rep. Blum. One has to wonder why.” said Donna Redwing, Executive Director of One Iowa.

“Today David Young voted to allow continued discrimination against the LGBT community. This type of extreme partisanship is something we should expect from someone who has never held a job outside of Congress. David Young changed his vote after being pressured by his party to vote against the LGBT community. This is why we need new representation in Congress and why I believe so strongly in putting service to Iowans ahead of politics.” Said Jim Mowrer.

David Young has a history of voting against bipartisan measures. He was one of just sixty four members of Congress and the only member of the Iowa Delegation to vote against the highway bill, he opposed the reauthorization of the Export Import Bank even after Governor Branstad and the State of Iowa issued a statement in support of the Bank, and after stating that he would not vote to repeal the Affordable Care Act he has voted seven times to repeal the Affordable Care Act.

Press release from Progress Iowa, May 19:

DES MOINES – The U.S. House held a vote today on an amendment to a Department of Veterans Affairs bill that would have protected LGBTQ workers against discrimination in government contracting. Iowa Representative David Young originally cast his vote in favor of the amendment, but once it became clear the measure might actually pass, he was one of six Republicans to switch his vote to ensure it failed in a 212-213 vote.

“David Young’s cowardly vote switch on a measure that would protect LGBTQ individuals from being outed and fired is an appalling act of political gamesmanship,” said Nate Monson, executive director of Iowa Safe Schools. “Iowa has a proud history of being on the forefront of expanding rights and protections for the LGBTQ community. Young’s actions do not reflect the will of his constituents and will anger many across the 3rd Congressional District.”

“It’s outrageous that David Young would so blatantly abandon his LGBTQ constituents,” said Matt Sinovic, executive director of Progress Iowa. “Young may have set a record for the speed of a political flip-flop in changing his vote over a matter of minutes while Republican leadership held open the vote while they pressured their members. Young’s capitulation to the far right leaders in DC calls into question whether he really believes in anything at all.”

Statement from One Iowa, May 19

[Des Moines]— Today, a Congressional vote was held on the “Do No Harm Act”, a bill introduced by Joseph Kennedy III (D-Mass.) and Bobby Scott, (D-Virg.). The bill would have amended the Religious Freedom Restoration Act (RFRA) to prevent federal legal claims and state laws that tread on others’ constitutional rights rather than protect religious freedom. It would have barred federal contractors from discriminating against the LGBT community.

Iowa Rep. David Young initially voted in favor of the amendment, but changed his vote at the last minute and rejected the legislation. The amendment was defeated by a margin of one vote (212-213). One Iowa Executive Director Donna Red Wing issued a statement condemning Rep. Young’s change of heart.

“We believe that the ‘Do No Harm Act’ would help RFRA be what it was intended to be – a shield to protect religious freedom, especially for minority religions and an individual’s exercise of religion – rather than a sword used to discriminate and separate in the name of religious freedom,” Red Wing said. “We are disappointed that a majority of the Iowa delegation rejected the legislation, and we are especially disappointed in Rep. Young. He had an opportunity to exhibit Iowa values of decency and fairness. For a moment, he did, but then changed his vote to stand with Rep. King and Rep. Blum. One has to wonder why.”