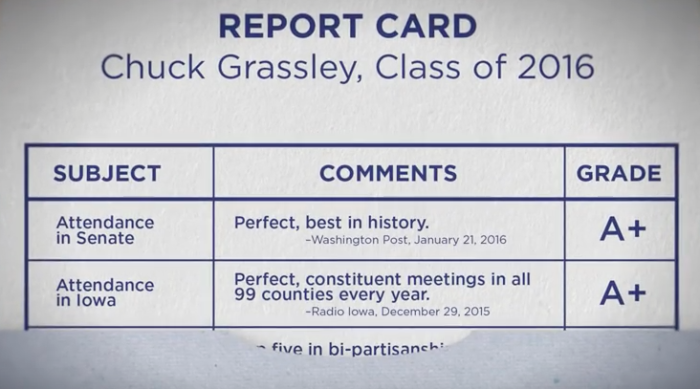 U.S. Senator Chuck Grassley has received substantial unflattering attention this week, thanks to his weak response to Donald Trump's racist case against a federal judge. While a steady stream of Republicans condemned Trump's sentiments, Grassley downplayed the significance of the issue on Tuesday, inspiring this Des Moines Register editorial's brilliant kicker: "when it comes to Donald Trump, there are invertebrates that have shown more spine than Sen. Charles Grassley."

In a conference call with reporters Wednesday, Grassley likened Trump's opinion to Supreme Court Justice Sonia Sotomayor's past statements about a "wise Latina." But he felt compelled to walk back that comparison only hours later amid a wave of criticism on national media websites and blogs.

The latest Trump scandal knocked Grassley's campaign off the message it has been trying to relay to Iowans over the past week. A new television commercial and multiple social media postings depict Grassley as a senator with a perfect "report card" for attendance, participation, and physical fitness. Like the campaign's first tv ad this year, this spot offers a rebuttal to "Do Your Job" taunts directed at Grassley over the Senate Judiciary Committee's refusal to give Supreme Court nominee Merrick Garland a hearing. It also employs the "Grassley Works" tag line, which has been long been a hallmark of the senator's case for re-election. I enclose below the video and transcript.

Grassley is rightly proud of his Senate voting streak, longer than that of any other senator in history. As of January 19, 2016, Grassley "hadn't missed a vote in an astonishing 22 years, six months and six days." His last absence during a Senate roll call happened during the summer of 1993, when he was touring flood-ravaged areas in Iowa with President Bill Clinton.

Grassley's campaign reminded Iowans of the senator's perfect attendance and visits to every county every year in some 2010 television commercials.

But showing up for votes and town-hall meetings is not the sum total of a senator's work. Choosing an unprecedented path of obstruction, rather than giving Judge Merrick Garland hearings and an eventual vote, won't cause Grassley to miss any Senate roll calls. Nevertheless, considering judicial nominees is among the Senate Judiciary Committee's most important tasks. Judicial confirmations have proceeded at a remarkably slow pace since Grassley took over that committee, but the senator and his staff refuse to acknowledge the growing number of judicial emergencies as a real problem for federal courts.

I wasn't familiar with the Lugar Center's bipartisan index; you can read more about the methodology here. Grassley was indeed ranked fifth on that index in 2015, though his lifetime score puts him in twelfth place among currently serving senators. Bipartisanship was the main theme of Grassley's first campaign ad this year.

I admire Grassley for taking up running in his 60s and keeping it up into his 80s. Early-morning exercise isn't relevant to how well the senator represents Iowa in Congress, but reminding voters of the habit undercuts the idea that Grassley may be too old to seek re-election. If he wins a seventh term, he would be 89 years old at its completion.

Give the senator's campaign staff an A for effort this week, as they keep trying to change the subject back to the "A+ senator" and his "perfect attendance record." Too bad this commercial won't reach nearly as many Iowans as will news reports about the Trump fallout. Grassley's response looks especially inadequate compared to that of Republican State Senator David Johnson.

P.S.- Although Grassley hasn't distinguished himself with his latest public comments, at least he hasn't sunk to the level of Sam Clovis, a senior adviser to the Trump campaign since last summer. Speaking to the Westside Conservative Club in Urbandale on Wednesday, Clovis described Trump's comments about Judge Curiel as "unartful" [sic] while making excuses for the attacks. Kathie Obradovich reported for the Des Moines Register,

“I think the issue is that the judge is of Hispanic heritage and the judge is a member of La Raza. That’s an issue,” he said. “Whether he is biased or not, it is the perception or appearance of bias and ... oftentimes the appearance of impropriety is worse than the actual act.”

Clovis described La Raza “virulently anti-American” and an organization that believes Mexico should reclaim property in the American southwest. However, a leader of the California La Raza Lawyer’s Association says Trump is wrong in characterizing the group as strongly pro-Mexican, according to PolitiFact.

Obradovich related other notable comments from Clovis while live-tweeting the morning event. Clovis pays more attention to what Trump does than to what he says, insisted Trump will be less influenced by special interests as he puts the country first, remarked on the Trump airplane's gold fixtures, characterized Trump as one of the five most intelligent people he knows, and made a bookmark-worthy prediction: Trump will put states in play "that haven’t been in play for a long time." Reacting to that statement, political scientist David Redlawsk quipped, "Yes, Trump will. But probably for Hillary."