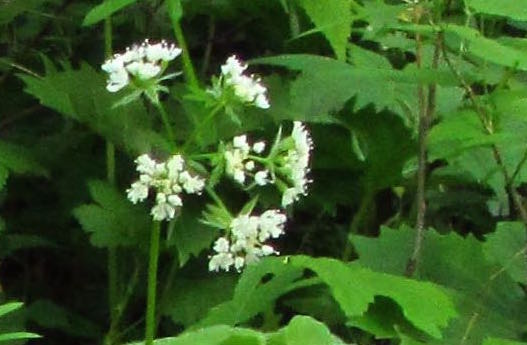 Today's featured flower is native to most of North America and prevalent in Iowa wooded areas. Anise root (Osmorhiza longistylis), also known as longstyle sweetroot or wild licorice, typically blooms in April and May in central Iowa. The plant is a close relative of sweet Cicely. In fact, I did not realize these were separate species until Eileen Miller mentioned the fact a couple of months ago. For me, words from the Minnesota Wildflowers website ring true: the hairy stems of sweet Cicely "are the most noticeable difference." The Illinois Wildflowers website explains the distinctions as follows:

Aniseroot (Osmorhiza longistylis) can be distinguished from many similar species in the Carrot family by the anise fragance of its foliage and roots. This species closely resembles Sweet Cicely (Osmorhiza claytonii) and they are often confused with each other. However, Sweet Cicely has only 4-7 flowers per umbellet, while Aniseroot has 7-16 flowers per umbellet. While the fruits of these two species are still immature, the persistent styles of Sweet Cicely are 1.0-2.0 mm. in length, while the persistent styles of Aniseroot are 2.0-3.5 mm. in length. The foliage and roots of Aniseroot have a stronger anise scent than those of Sweet Cicely, and its root can be used as a substitute for black licorice.

Except where noted, I took most of the pictures enclosed below in Windsor Heights during the month of April.

I usually see aniseroot foliage start to grow in late March or early April. Here aniseroot leaves have emerged near the center of the frame. Toothwort is already blooming near the top, along with yellow violets.

Aniseroot leaves on the right, yellow violets on the left, toothwort blooming near the upper right.

Striped white violet blooming, aniseroot leaves to the upper left and center, common black snakeroot foliage to the right, large wild ginger leaves at the bottom of the frame.

Note the mostly bare stems on the aniseroot.

A few hairs are visible where the stem and stalk meet and on the upper part of the plant.

Aniseroot thrives in partial shade moist woodland habitats or ravines with partial shade. I've often seen it growing alongside sweet Cicely, as in this picture. Note the hairy stems of the sweet Cicely in the foreground.

Aniseroot to the left, sweet Cicely to the right.

Aniseroot growing among a stand of May apples (umbrella plants).

From left to right: Virginia waterleaf starting to flower, a May apple in bloom, some kind of bedstraw, and aniseroot.

I had trouble getting clear close-up shots of the small white flowers.

Aniseroot flowering with seed pods starting to form near the upper right. UPDATE: According to naturalist and photographer Leland Searles, green seed from either sweet Cicely or aniseroot can be used as "a trail side breath freshener."

In early May I went to the Woodland Mounds Preserve in Warren County on a hunt for dwarf larkspur. While there I saw massive colonies of aniseroot. These pictures show just a small portion. The purple flowers near the foreground are sweet William.

I took this picture earlier this week. The aniseroot seed pods are easier to see; the foliage is turning yellow. Tread carefully in Iowa wooded areas; note the poison ivy leaves to the left.