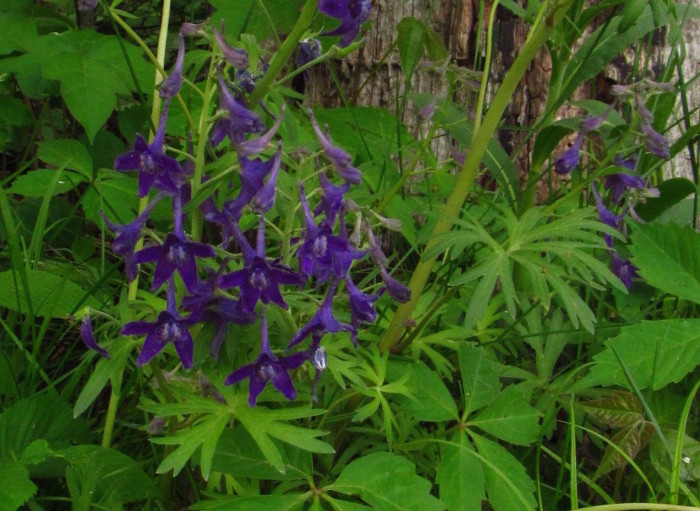 Like last week’s featured plant, Dwarf larkspur (Delphinium tricorne) was a new addition to my wildflower “life list” recently. I went hunting for it at the Woodland Mounds Preserve in Warren County on a tip from Marla Mertz. (By the way, her guest post about showy orchis is a must-read if you missed it earlier this month.)

Sometimes known as spring larkspur, dwarf larkspur is native to more than 20 states east of the Rocky Mountains. I enclose below more pictures of this species, which is “quite hardy and very adaptable to home gardens,” according to garden writer Gene Bush.

Woodland Mounds was much larger than I expected; I only had time to explore about half the trails. I hope to return several times this year to see what’s blooming in the summer and to get a closer look at the mounds that were used by Native Americans for burial or religious ceremonies.

If you visit this preserve with young children, try to keep them on the trails, and make sure they how to identify poison ivy, because I saw tons of it thriving just a few steps off both sides of the beaten path.

A member of the Iowa Wildflower Report Facebook group told me some dwarf larkspur was growing behind the small building with restrooms, near the parking lot. The first deep purple flowers were right where she said they would be:

Several more colonies were growing along the lower loop of the trails. These plants were just budding:

The Illinois Wildflowers website has a detailed description of dwarf larkspur foliage and flowers. Contrary to what you would think at first glance, the striking purple parts are not petals. Gerry Williamson explains at his U.S. Wildflowers website,

For a closer view, check out Williamson’s shot or the photo near the bottom of the Illinois Wildflowers page. This was the best I could do:

Here a small dwarf larkspur is growing near a leaf for dogtooth violet, also known as trout lily. A closed spring beauty blossom is peeking out from behind the larkspur:

Many kinds of bees, butterflies, and moths pollinate dwarf larkspur, as do some ruby-throated hummingbirds (the only hummingbird species native to Iowa). Gene Bush has good advice for people wishing to grow dwarf larkspur near their homes.

In the six years or so I’ve been paying attention to native plants, I’d never come across dwarf larkspur. At Woodland Mounds, I enjoyed finding some of these relatively rare spring bloomers juxtaposed with the most prevalent and most hated of all Iowa wildflowers, the dandelion:

Masses of sweet William were blooming at Woodland Mounds. It’s common in wooded areas throughout Iowa but seemed unusually abundant at this preserve. You can see the lighter purple blossoms behind the dwarf larkspur in the next two pictures.