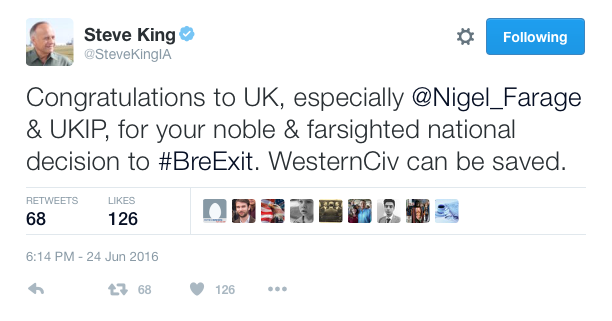 I wish I could say the above tweet was satire, but that is a genuine post by Representative Steve King a day after the “Brexit” referendum, in which roughly 52 percent of United Kingdom voters marked their ballots to Leave the European Union.

In some ways, King and Nigel Farage of the U.K. Independence Party are birds of a feather. King has claimed immigration threatens to drag the U.S. down to “Third World status,” and like Farage has implied that immigrants commit violent crimes at higher rates than native-born citizens, though research doesn’t bear out the scare-mongering. Farage employs race-baiting to stir up opposition to his country’s immigration policy. Others including UKIP founder Alan Sked have claimed Farage’s racism is deep-seated.

King may not be aware that Farage has long called for spending more of the UK’s budget on the National Health Service–that is, socialized medicine. In fact, before the Brexit vote one of the biggest talking points for the Leave campaign was reallocating an exaggerated total of money allegedly “spent” on the EU to the NHS–a promise Farage now admits cannot be kept.

Iowa’s most persistent warrior against “Obamacare” has inaccurately characterized the 2010 Affordable Care Act as the “nationalization” of health care. He also has falsely described the State Children’s Health Insurance Program as “socialized” medicine. He could hang out with Farage at some NHS hospitals and clinics to learn what government-run health care really looks like.

At least King didn’t reveal Donald Trump’s level of ignorance yesterday. While visiting Scotland to open a golf course owned by one of his companies, Trump claimed the “Place is going wild over the vote. They took their country back, just like we will take America back.” Remarking on what he called a brave & brilliant choice, Trump seemed unaware that every county in Scotland voted to Remain in the EU. Many Scots took to Twitter to correct the record, often using colorful language in reference to the billionaire.

P.S.- Like Trump, UKIP leader Farage is said to be an admirer of Russian President Vladimir Putin’s leadership style.