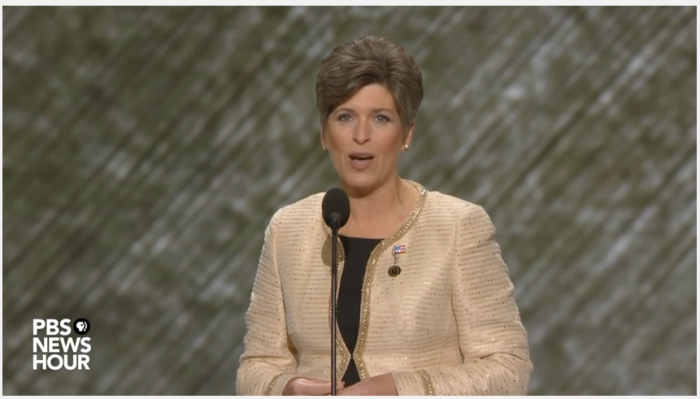 The good news for U.S. Senator Joni Ernst was she didn't make any gaffes during her speech last night at the Republican National Convention in Cleveland.

The bad news: her speech made little impression on the relatively few people who watched it.

Ernst should have been the biggest Iowa story yesterday. She was supposed to speak during the final half-hour of prime-time coverage and vowed to "come out swinging." As journalist David Bernstein observed, Ernst was the only woman among seven on last night's schedule who was there because of her own achievements rather than some "familial connection to a man."

During the afternoon, Iowa's delegation was caught up in high drama when "stop Trump" activists made their last stand. Multiple media reported that Iowa was among the nine states whose delegates submitted petitions seeking a roll-call vote over party rules. But convention chair Reince Priebus never called that vote, because intense "arm-twisting" by senior RNC figures and Donald Trump loyalists convinced three states, including Iowa, to withdraw their petitions. The flap dominated cable network news coverage for hours. Priebus bizarrely left the podium for a time while anti-Trump delegates shouted from the floor.

Leading members of Iowa's delegation downplayed our state's role in the brouhaha. Jason Noble reported for the Des Moines Register,

Some Iowa delegates initially signed on to that effort, Iowa delegation chairman Matt Schultz said, believing that it would allow a discussion on two rules changes many in the delegation support: apportioning delegates to states based on the number of registered voters rather than population, and calling for closed primaries in which only registered Republicans are allowed to vote.

With that understanding of the proceedings, as many as 18 or 19 of Iowa's 30 delegates signed a petition to force the roll call. But when it became clear that the roll-call effort was part of a plan to undermine Trump, many Iowans pulled out.

On the other hand, Iowa delegate Marlys Popma told Kyle Cheney of Politico, "People knew exactly what they were signing."

According to some reports, Iowa's delegation walked out of the convention hall to protest the scuttled roll-call vote, though it appears that only one delegate from our state did so.

Senator Tom Cotton of Arkansas was able to speak relatively early in the evening, when the convention was more or less running on time. For some reason, his Senate colleague and fellow veteran Ernst was one of the last speakers in the line-up. She had to follow not only the nominee's wife Melania Trump but also retired General Michael Flynn, who seemed to drone on forever. By the time Ernst took the stage a little more than a half-hour behind schedule, broadcast television networks had already cut away to late-night newscasts. Only public television carried the speech live in the Des Moines area. Thousands of delegates left after hearing Melania Trump, so Ernst had to address an "almost empty hall."

While some analysts felt Ernst produced a good, "policy-focused" speech, to my ear, her remarks didn't flow well. They lacked punchy applause lines or smooth transitions as Ernst jumped from foreign policy to Hillary Clinton's e-mails to substandard care provided by the Veterans Administration, then back to a rosy vision of Trump as commander in chief.

Nor did the senator deliver the speech particularly well. Here's the full video, for those who missed it:

I was struck by awkward mid-sentence pauses at several moments, such as the passage beginning around the 9:45 mark: "Donald Trump will not hesitate to call radical Islamic terrorism by its name. And he will not hesitate to destroy those that wish to harm our great nation. USA!" It's never a good sign when the speaker has to try to solicit an audience chant.

Around the 14:00 mark, Ernst smiled and chuckled in the middle of reciting these lines: "Our country cannot take another four years like the eight we've just had. It's time to stand up and fight for the security of our children! Our grandchildren! And ourselves! (laughs) With Hillary Clinton, it's always about her. It should be about you! Donald Trump is focused on you!"

That's hilarious, since Trump's extreme narcissism is apparent to anyone who casually observes his campaign and especially to those who have spent lots of time around him.

After the convention wrapped up Monday night, Ernst did a round of cable tv interviews, but those were overshadowed by the revelation that portions of Melania Trump's speech had been lifted from Michelle Obama's remarks at the 2008 Democratic National Convention. Social media chatter and televised commentary about the RNC dwelled on side-by-side comparisons and continue to do so this morning.

Monday evening must have been disappointing for Ernst. If it's any consolation to her fans, Bill Clinton's poorly-received speech to the 1988 DNC didn't hurt his political career. In any event, Ernst's enthusiastic support for Trump is more likely to become a long-term liability than anything that happened this week in Cleveland.