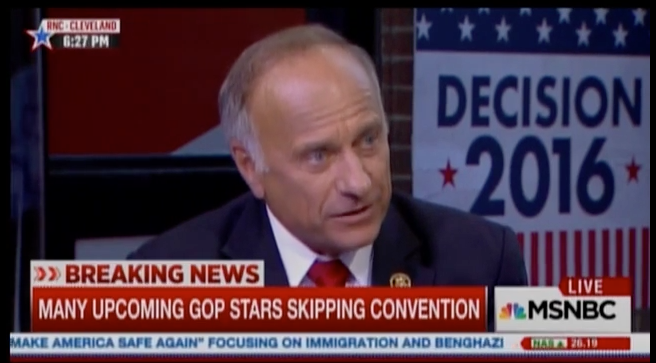 Steve King: Whites have contributed more to civilization than other "sub-groups"

Representative Steve King's concerns about people of non-European origin damaging American civilization are not news to anyone who has followed the Iowa Republican's career. In the last month alone, King has asserted that it is "racist" to add the image of Harriet Tubman to the $20 bill and that the United Kingdom vote to leave the European Union may help save western civilization. At the same time, King has no problem displaying a Confederate flag, under which people fought and died to preserve slavery and divide this country, on his office desk.

King takes the alleged superiority of white culture for granted, which might not raise eyebrows on the conservative radio and television programs where he is a frequent guest. But when King floated those views to MSNBC's national viewing audience this afternoon, the reaction was as explosive as the wave of outrage and mockery regarding House Speaker Paul Ryan's "so white" selfie with interns.

Watching today's news coverage of the Republican National Convention in Cleveland, it was hard not to notice the overwhelmingly white crowd.

During a panel discussion led by MSNBC host Chris Hayes, Charles Pierce of Esquire observed that this may be the last election in which "old white people" are the public face of the Republican Party, adding that the convention hall is "wired" by "loud, unhappy, dissatisfied white people." King countered (my transcript),

This "old white people" business, though, does get a little tired, Charlie. I mean, I'd ask you to go back through history and figure out, where are these contributions that have been made by these other categories of people that you’re talking about? Where did any other sub-group of people contribute more to civilization?

As others have already noted, darker-skinned people from non-western cultures have made massive contributions to world civilization, such as written language, agriculture, and essential principles of mathematics and medical science. Moreover, as journalist April Ryan tried to point out before Hayes cut off a discussion he considered "odious" and "preposterous," you can't talk about U.S. history without acknowledging the contributions made by African-Americans.

King's remarks were "asinine" and displayed an ignorance of history and a lack of sensitivity for race relations. He suggested King lacked knowledge about the contributions of African-Americans and slaves, Chinese people who helped to build the railroads, and of women. "Let’s talk about the contributions of Africa that actually brought Europe out of the Dark Ages," he added.

I would add that that all "sub-groups" of Homo sapiens have origins in Africa, the continent where modern humans emerged some 60,000 to 100,000 years ago.

At this writing, I've seen no comment from Republican Party of Iowa chair Jeff Kaufmann. He also had nothing to say about King keeping a Confederate flag on his desk in the halls of Congress.

Indeed, King's perspective is in tune with the white resentment stoked by Trump. Both Iowa's most embarrassing member of Congress and the GOP's presidential candidate are walking nightmares for Republican strategists worried about the party's image as a haven for racists. King traced last week's assassination of Dallas police officers to "anti-white/cop events illuminated by" President Barack Obama. Trump's race-baiting reaction to the Dallas tragedy inspired this post by Pierce assailing the soon-to-be nominee as a threat to American democracy. Josh Marshall was on the same wavelength in his assessment of Trump as a "dangerous authoritarian personality who is either personally deeply imbued with racist rage or cynically uses that animus and race hatred to achieve political ends."

King said “the truth is provocative” to people like Branstad who are in “the establishment.”

“They see culture as evolving...They want to accept it as quickly as possible so it’s not a liability to be ‘on the wrong side of history,’...That’s what they will say,” King said. “...I say instead that these fundamental principles are timeless. Whatever was a sin 2000 years ago is a sin today.” [...]

“I don’t think the establishment wing of the party stands up against the multiculturalists, the political correct crowd,” King said this morning. “They back up from them. They kowtow to them and I say instead: ‘Let’s confront them.'”

Political cartoonist Brian Duffy lamented on Twitter, "I can't keep up with this guy!"

SECOND UPDATE: King continued to defend his comments on Tuesday. From the write-up by Ed Tibbetts in the Quad-City Times:

"That comes out of the mouths of liberals on a daily basis around this country. They’re disparaging a group of people. And it’s about time somebody stood up for that group of people,” King said. [...]

Asked Tuesday what he meant by “subgroup,” King said: “You can divide that any way you want, but I brought that back to western civilization itself, the very foundation of western civilization. And there’s no culture, no civilization in the history of the world that’s contributed more in the area of math, or science or technology or medicine or literature. That’s just a clear fact. And it runs directly contrary to their theory of multiculturalism, which is every culture is equal. They’re not. They’re not equal in their contribution. And we ought to be selecting the best we can from what each culture has to offer.”

Kathie Obradovich covered the controversy in her latest column for the Des Moines Register:

“We ought to be selecting the best we can from (what) each culture has to offer and retaining the best of ours. And they’re degrading the best we have in ours instead of helping to upgrade the broader American civilization,” King said. [...]

I asked King whether he thought his remarks would contribute to the racial tension.

“Well, if we don’t come to reality, if we don’t have an objective view, if we are going to be simply revising history the way that it suits us on what’s politically correct in this era, then in the end, it will degrade our culture and eventually over a long period of time, destroy it,” he said.

I don’t know if that was a yes or a no, but it seems to me that King’s “objective” truth about cultural contributions in history is in fact a very subjective and narrow perspective.

King's remarks spawned many writers to publish lists of important things not invented by white people of European descent. Josh Horwitz posted one of the best at Quartz.

THIRD UPDATE: April Ryan and other African-American journalists questioned King on July 21. Ryan posted the full audio. Here's my transcript of one of the most remarkable portions, starting around the 4:00 mark, after Ryan suggested that comments like King's might not help the GOP appeal to a more diverse population.

King: I think in the long run they do help, because it forces a conversation. And we have to have a conversation about this. When we get to the point where we need to be in this society, it's when we can step on the subway and actually joke about it. That may take a generation or a century or we may never arrive there. But you know, there's far too much focus on the differences between people. And when I see that wedge being driven, then somebody's got to speak up and say something. And what I said is completely and demonstrably and objectively true. And my words that were chosen were chosen under fire, but they were, they were well enough chosen that the message stands up, and I don't believe it can be argued.

Self-awareness has never been King's strong suit. It is hilarious to see him posture against using wedges to divide people.

After Ryan mentioned various innovations that came from Africa or African-Americans, King responded (beginning around the 7:10 mark):

When I said, name a civilization that's contributed more. That's what I said.

Ryan: And I said Africa/Asia.

King: Did they contribute more?

Ryan: They contributed a lot. I don't know-

King: But did they contribute more?

Ryan: Let me ask you-

King: This is really tiresome. We can't get to a logical discussion here.

Here's the final portion, beginning around the 19:15 mark:

King: I want to you to think about what I said. I'll think about what you said. But I think this issue has been so ginned up, it's just so edgy, that it's made it almost impossible for there to be dialogue. And I'm working on dialogue, and I'm working with conservative black organizations to start opening up this dialogue in a face to face, eye to eye direct way. Like we're doing here, only in larger groups.

This whole "ginned up" scandal didn't need to happen. Pierce was only stating the obvious: the RNC crowd is overwhelmingly white and includes a lot of angry white people. King chose to interject his views on what different racial groups have contributed to civilization.