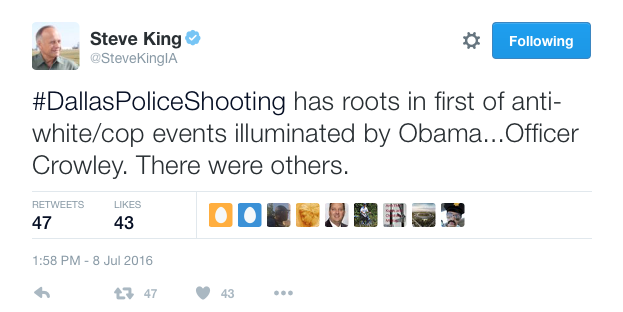 We may never comprehend the underlying cause of Micah Johnson's murderous spree during Thursday night's Black Lives Matter protest in Dallas. The 25-year-old Army Reserve Veteran had served a tour in Afghanistan and had no criminal record or ties to terrorist groups, law enforcement officers believe. He apparently used an AR-15 assault weapon to kill four police officers and a Dallas Area Rapid Transit officer, wounding seven other officers and two civilians. During a standoff before he was killed by a bomb police detonated, Johnson reportedly said "he was upset about the recent police shootings" and "wanted to kill white people, especially white officers," Dallas Police Chief David Brown told the media on July 8.

The fatal shootings of Alton Sterling by a police officer in Baton Rouge, Louisiana and Philando Castile by an officer in Falcon Heights, Minnesota provoked national outrage and many Black Lives Matter protests, including the one in Dallas. Despite what the alleged gunman reportedly told officers shortly before his death, those shootings may not be the only reason Johnson took it upon himself to end innocent lives. Maybe he had post-traumatic stress disorder related to his service in a war zone (in a non-combat role). Maybe he had unresolved mental health issues not related to his military service. Maybe he had visions of glory similar to those that have inspired other perpetrators of mass shootings. We just don't know.

Yet Representative Steve King (R, IA-04) confidently traced the Dallas police shootings to a different national phenomenon, which he described as "anti-white/cop events."

King did not immediately politicize the tragedy in Dallas as news was breaking Thursday evening. He tweeted, "Our hearts and prayers go out for the officers ambushed and murdered in Dallas, for their families, friends and fellow officers," adding a few hours later, "#Dallas Mayor & Police Chief are demonstrating a core of character, principle, and resolve in press conference right now."

Friday afternoon, King re-tweeted a comment by Laura Ingraham, hinting she did not expect a sufficiently sympathetic response from the president: "Hope the White House is lit up in blue tonight for solidarity and support of police. Remember they did the rainbow last year" (in response to the U.S. Supreme Court's marriage equality ruling in Obergefell).

A few minutes later, King asserted, "#DallasPoliceShooting has roots in first of anti-white/cop events illuminated by Obama...Officer Crowley. There were others."

Though Officer Crowley's name rang a bell, I couldn't place him. He's the Cambridge, Massachusetts police officer who arrested Harvard Professor Henry Louis Gates, Jr. for disorderly conduct on his own front porch. Crowley had been called to the scene by neighbors who thought a break-in was in progress when Gates was trying to enter his home.

After the incident made national news, President Barack Obama commented,

"Now, I don't know, not having been there and not seeing all the facts, what role race played," Obama said. "But I think it's fair to say, number one, any of us would be pretty angry; number two, that the Cambridge police acted stupidly in arresting somebody when there was already proof that they were in their own home."

Obama continued: "What I think we know, separate and apart from this incident, is that there's a long history in this country of African Americans and Latinos being stopped by law enforcement disproportionately. That's just a fact." [...] "And even when there are honest misunderstandings, the fact that blacks and Hispanics are picked up more frequently, and often time for no cause, casts suspicion, even when there is good cause."

Many conservatives were outraged. The president later invited Crowley and Gates to share a drink at the White House. The police officer and professor continued to insist they had done nothing wrong on the night of the arrest.

I reject King's premise that criticism of Crowley or of officers involved in deadly incidents reflects anti-white or anti-cop sentiment. The Black Lives Matter movement is not against white police officers. Its supporters object to police misconduct and brutality--not police officers as a group or police departments as institutions. As Obama said on July 7, "To be concerned about these issues [police shootings] is not political correctness. It's just being American, and wanting to live up to our best and highest ideals. [...] we can do better. People of good will can do better."

Most police officers do their jobs professionally. Unfortunately, some officers needlessly escalate situations and use unnecessary force, in the worst cases killing people who posed no threat to them. The people on the wrong end of those encounters are statistically more likely to be non-white. For Gates, an officer's overreaction led only to an unjustified arrest, but for Philando Castile, it led to death during a routine traffic stop.

Police officers are also more likely to pull over African-Americans for trivial reasons. In more than 20 years of driving in this country, I have never been pulled over. A white female friend in the Des Moines suburbs has been driving with a broken tail light for months without being pulled over. She commented yesterday on Facebook, "A couple weeks ago a black man flagged me down, urgently telling me like it should be my first priority. For him, something like that would be. Not for me. Not for most of you reading this." Records show Castile had been pulled over 52 times.

King doesn't have mind-reading abilities or special insight into why Micah Johnson used his assault weapon to commit mass murder at a peaceful protest. Implying that the president or others are to blame for inflaming "anti-white/cop" sentiments is irresponsible.

King's video statement about the Dallas police shooting, also released on July 8, did not connect the dots to the president. However, he alluded to what he sees as an "unnecessary" "hatred" of the police (my transcript, starting around the 4:00 mark):

And I would call upon all the leaders of this country to express a supportive sentiment towards all of our law enforcement officers. We are faced with an urban warfare today that's stimulated by a hatred that was unnecessary, and that needs to be dissipated. And we need to have leadership help lead us out of this. Meanwhile, God bless all of them. May their souls rest in peace. May their families have the comfort of knowing that they had heroes among them [...].

King doesn't seem to acknowledge any legitimate grounds for concern about how police treat African-Americans. Gates took a more constructive view shortly after his White House meeting with Crowley, expressing the hope "that many people have emerged with greater sympathy for the daily perils of policing, on the one hand, and for the genuine fears about racial profiling, on the other hand."

P.S.- Though renowned for his headline-making offensive remarks, King didn't have most insensitive politician's reaction to the terrible events in Dallas. His former House Republican colleague Joe Walsh was the undisputed champion in that category after posting, then deleting, this threatening tweet: "3 Dallas cops killed, 7 wounded. This is now war. Watch out Obama. Watch out black lives matter punks. Real America is coming after you."

JULY 11 UPDATE: The Des Moines Register ran a blistering staff editorial on King's "dangerous" comments. Do click through to read the whole thing, but here are some excerpts:

At this point, most Iowans have come to grips with the fact that every 60 days or so U.S. Rep. Steve King will erupt like a volcano and spew forth some sort of racially tinged nonsense that embarrasses them all.

Last week, however, King did more than spout his usual stream of inanities. [...]

Given its timing, this is a supremely dangerous, reckless accusation for the congressman to make.

Relations between law enforcement and the black community are at their lowest point in the past half-century. At the moment, every major city in America is a tinderbox, as protesters, the vast majority of whom are peaceful, find themselves face to face with police, the vast majority of whom are conscientious professionals there to keep the peace. Both sides know that if one protester or one police officer acts irresponsibly, the situation could quickly spin out on control and turn deadly.

King’s thoughtless statement does nothing but promote even more suspicion and mistrust between the minority community and the police. It also fans the flames of racial intolerance, characterizing the Cambridge incident — in which both parties were to blame — as nothing more than an “anti-white/anti-cop” event.