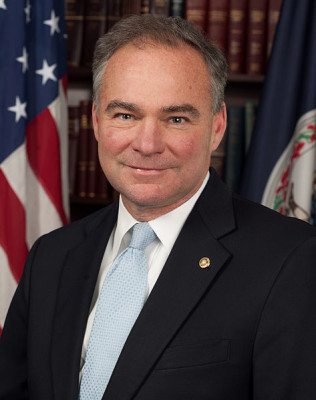 Hillary Clinton's campaign announced a few minutes ago that U.S. Senator Tim Kaine, a former mayor of Richmond and governor of Virginia, willge the Democratic candidate for vice president. Kaine's been the front-runner for the job all along, by virtue of his extensive political experience, stature in a swing state, good ties with the business community, and fluency in Spanish.

I suspect that the Bernie Sanders endorsement last week, combined with the mostly disastrous Republican National Convention, gave Clinton confidence to make a "safe" choice, rather than someone who would excite our party's base, like Senator Elizabeth Warren or even Senator Cory Booker. Too bad Ohio has a Republican governor, otherwise Senator Sherrod Brown would have been an ideal running mate. Some pundits are calling Kaine a "governing pick," someone Clinton feels comfortable working with for the next four or eight years, as opposed to the person who can do the most to boost her campaign over the next four months.

Of all the people Clinton was considering, Kaine arouses the most antipathy from the Sanders wing for various reasons. His vocal support for the Trans-Pacific Partnership trade agreement is just one of the problems. Kaine's defenders point to his perfect voting record in the Senate on reproductive rights and LGBT equality, his near-perfect record on labor issues, his background as a civil rights attorney, and numerous accomplishments as governor. He is not outside the Democratic Party's mainstream. On the other hand, the Progressive Punch database ranks Kaine the 40th most progressive among the 46 current senators who caucus with Democrats.

U.S. Secretary of Agriculture and former Iowa Governor Tom Vilsack was repeatedly named in news reports and commentaries about Clinton's short list. He's got an inspiring personal story and developed a tremendous grasp of public policy over his long career in local, state and federal government. By all accounts, he and Clinton get along very well, having been acquainted since Clinton became friends with Christie Vilsack's brother Tom Bell during the 1970s. Like Kaine, he has a reputation for making few mistakes. I regret that Clinton didn't choose Vilsack, though I would have been equally happy with Labor Secretary Tom Perez.

No one is more disappointed tonight than the Iowa Democrats who know Vilsack best. Sometimes in politics, you hear how so-and-so big shot elected official was a nightmare to work for. You never hear those stories about Vilsack. On the contrary, the former Vilsack staffers I know rave about how knowledgeable, thorough, caring, engaging, and funny he was.

Then First Lady Clinton came through for Vilsack at a critical time during his underdog 1998 gubernatorial campaign. I have no doubt she will tap him for an important job if she is elected president. Iowans will see plenty of Vilsack on the trail this fall as a supporter of Clinton and down-ticket candidates.

Any thoughts about Kaine or the presidential race generally are welcome in this thread.

UPDATE: Added below some comments from Iowa Democrats to the Des Moines Register's Jason Noble and Brianne Pfannenstiel.

SECOND UPDATE: Embedded below the video from the first joint campaign appearance by Clinton and Kaine, in Miami on July 23. His stump speech is worth watching in full; it was remarkably well constructed and delivered. I see more clearly now what this "happy warrior" could bring to the ticket. He wove together personal details, policy accomplishments, and a clear contrast between Clinton's vision for the country and Donald Trump's. I didn't know much about Kaine's legal work to combat housing discrimination, or that he and his wife sent their kids to public schools. If he does as well at the DNC on Wednesday night, Republicans should be worried.

From "Iowans consider Kaine a smart choice by Clinton":

“He will help her in Iowa," [U.S. Representative Dave] Loebsack said. "Hopefully he will come here, early and often, and we’ll get to know him better in the state of Iowa than is the case right now." [...]

“I think Tom Vilsack would’ve been a great choice, but I understand Hillary Clinton has to choose the one that makes the most sense for the national ticket,” [Iowa Senate Majority Leader Mike] Gronstal said. “And I also understand Virginia has more electoral votes than Iowa.” [...]

"I applaud Hillary Clinton selecting as her running mate my former colleague and good friend, Senator Tim Kaine. I know firsthand that Senator Kaine has spent his career fighting for working families and ensuring that every American has an equal opportunity to succeed," he said in a statement.

Former Harkin staffer Rob Barron, a member of the Des Moines School Board and a leader of the non-partisan Latino Political Network, told the Register "I would love to have [Kaine] come to Iowa and meet some Latinos."