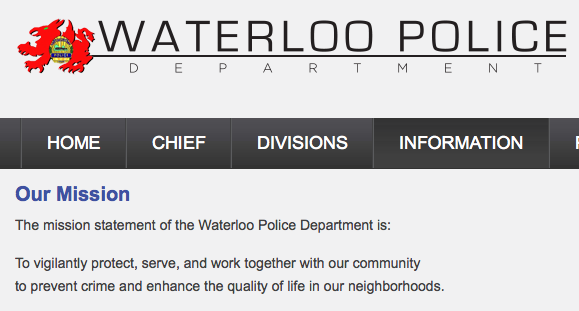 Waterloo police chief on the way out (Updated: No, he isn't)

Big news broke in Waterloo on Friday: Police Chief and Director of Public Safety Dan Trelka will apparently be out of a job soon, after more than six years as the top law enforcement officer in Iowa's sixth-largest city. KWWL was first to report that Trelka "informed some officers and staff members this morning [September 16] that he's been asked to step down."

Mayor Quentin Hart has the power to remove the police chief. He has not yet made any public announcement, and neither he nor Trelka confirmed the story when contacted by multiple journalists on Friday. Several Waterloo City Council members weren't happy that the mayor kept them out of the loop. They expressed concerns about the lack of communication in interviews with KCRG and the Waterloo-Cedar Falls Courier.

Jeff Reinitz reported for the Courier,

News of the removal of the popular chief rippled through the community Friday and Saturday with many people expressing dismay and outrage Trelka is the fall guy for the department.

There were reports on social media a crowd will show up at Monday’s Waterloo City Council meeting to protest the decision. [...]

In recent weeks, officers have been undergoing diversity training, and last week Trelka said he had been in meetings with the U.S. Department of Justice’s Community Relations Service.

Trelka repeatedly demonstrated that he lacked the insight and commitment to change a culture that spawned multiple lawsuits over excessive use of force by white officers against African-Americans. He chose not to discipline several officers who needlessly escalated encounters, leading to expensive legal payouts for the city. Trelka told a local radio interviewer that the persons involved were "good officers." Yet one of them has inspired four lawsuits in four years and made false statements on a police report to justify his actions in an encounter that led to a $100,000 settlement with a (possibly illegal) confidentiality clause.

Trelka also depicted an external review funded by the U.S. Department of Justice as a "favorable report," when in reality, experts had identified many ways to improve training and policing in the city. I've found no sign senior Waterloo police officials acted on any of those recommendations. Some of them would have been easy fixes, like revising the department's mission statement or creating an online form for complaints about officers.

In what now looks like a desperate attempt to save his job, Trelka traveled with Hart to North Carolina last month to meet with an expert on community policing. They arranged for Garry McFadden come to Waterloo in early September to meet with local stakeholders, Tim Jamison reported for the Mason City Globe-Gazette on September 7. But a different police chief will be better positioned to follow through on new approaches to community relations and will likely have more credibility with African-Americans, who are more likely to be on the receiving end when officers use force.

Racial disparity in how police treat civilians and suspects is a nationwide problem, of course. But in Iowa, one city has had many more scandals than others. Although replacing one person won't magically solve all the Waterloo Police Department's problems, the buck stops with the chief.

I'm still with the Des Moines Register editors, who last weekend called for a comprehensive Department of Justice review of police conduct in Waterloo. Recent lawsuits and the "targeted technical assistance" provided last year may not have revealed the full extent of unacceptable practices.

UPDATE: Perhaps my headline was premature. Trelka is seeking publicity for his outreach to the African-American community, and his allies may pressure Mayor Hart to change his mind. KWWL reported on September 18,

Chief Trelka planned to bring the community together, inviting them to attend his church for a Sunday School Service over a month ago, before he knew anything about the resignation. [...]

"We are praying for God's intervention in this situation because I do believe, in all of my knowledge of him, that he has been a definite asset to the city," said Reverend Marvin Jenkins, Union Missionary Baptist Church.

Member's of Chief Trelka's congregation, also praying for him. [...]

Chief Dan Trelka's wife says it's been a long week, but that didn't stop the police chief from going to the event that he planned over a month ago at the Union Missionary Baptist Church.

If any reader attends Monday's Waterloo City Council meeting, I would welcome a guest post offering first-person account of the atmosphere and the remarks from community members as well as public officials.

SECOND UPDATE: After the Des Moines Register called for a full DOJ review of his department, Trelka spoke to the Waterloo-Cedar Falls Courier about improvements:

“We realize we need to adjust, and we will. We are developing a comprehensive plan to do just that. We recently provided two training sessions offered by the DOJ,” Trelka said. [...]

Also, earlier this month, the department hired consultant Troy Cicero of Chicago to provide diversity training to its officers.

Trelka said the police department has had diversity training in the past, but the sessions were “in your face” and officers felt like they were being scolded, he said.

Ideally, the department would have started working on that plan a year ago, when external reviewers advised them to do so.

MONDAY UPDATE: Hart and Trelka held a joint press conference on September 19 to announce that Trelka will stay on as police chief, Tim Jamison reported for the Waterloo-Cedar Falls Courier. Since 2011, Trelka had also overseen Waterloo Fire Rescue in his role as the city's director of public safety.

Neither Hart nor Trelka took questions about the reports Trelka had been asked to resign. Hart repeated his statements that he would not talk about personnel matters.

Trelka said he was not quitting and will "work with Mayor Hart."

"We've got some challenges to face; we've got some adjustments to make," Trelka said. "We're having great conversations. All of this is for the betterment of Waterloo and I'm optimistic for the future of all of us." [...]

"(Trelka) and I both agree that at this moment the focus should just be with WPD as chief," Hart said. "The challenges that we face internally and externally are too daunting to have a dual capacity."

Assuming Friday's reports were accurate and Trelka "was emotional as he informed some officers and staff members" he was being forced out, the chief boxed the mayor into a corner masterfully. The story exploded while Hart was out of town, giving Trelka's supporters three days to make noise on social media and build a crowd before today's city council meeting. Council members were clearly annoyed not to have been consulted. Perhaps Hart had planned to talk with them before announcing his decision; if so, the leak to KWWL from police department sources made that impossible.

I hope Trelka proves to be as skilled at reforming his department as he is at public relations. A year ago, he got plenty of good advice from the Police Executive Research Forum, but seems to have used that report primarily as a talking point, rather than as a road map for improvement.