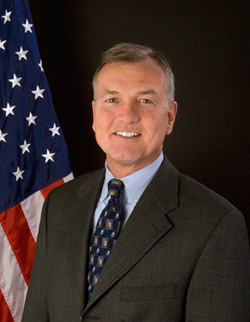 Where are they now? John Norris edition

A big name in Iowa Democratic politics recently moved back to our state after nearly six years in Washington and two abroad.

John Norris worked on Senator Tom Harkin’s staff during the mid-1980s before running Jesse Jackson’s 1988 Iowa caucus campaign. He served as chief of staff for Representative Leonard Boswell after Boswell’s first Congressional election in 1996 and and later played the same role in Governor Tom Vilsack’s administration, with a term as Iowa Democratic Party chair in between. During the last decade, Norris ran for Congress against Representative Tom Latham in 2002, managed John Kerry’s campaign before the 2004 Iowa caucuses, and was a Vilsack appointee to the Iowa Utilities Board.

After Vilsack ended his short-lived presidential bid in 2007, Norris and his wife Jackie Norris became important early Iowa supporters of Barack Obama. Jackie Norris later managed Obama’s 2008 general election campaign here, helping to deliver the state by nearly a 10-point margin. Some Democrats grumbled that down-ticket candidates didn’t get enough help to fully capitalize on Obama’s victory after Jackie Norris’s team took over the “coordinated campaign” that handled GOTV in the fall of 2008.

The Norrises moved to Washington soon after Obama was elected, and John Norris became Vilsack’s chief of staff at the U.S. Department of Agriculture. Obama later appointed him to the Federal Energy Regulatory Commission, after which he spent two years in Italy as U.S. Minister-Counselor for Agriculture to the United Nations Food and Agricultural Organization and the World Food Program.

What brought Norris and his family back to the Des Moines metro was a chance to run the State Public Policy Group, a consulting firm that offers lobbying, communications, strategic planning, research, grant writing, and other services. Tom Slater founded SPPG during the mid-1980s after representing the Council Bluffs area for two terms in the Iowa Senate. (Senate Majority Leader Mike Gronstal was first elected to the upper chamber in 1984, the year Slater retired.) Hoping to retire from actively managing the company at age 70, Slater spent more than a year seeking buyers for SPPG. Effective September 1, Norris became a co-owner, along with former political consultant, administrative judge, and online educator Brad Knott.

Either John or Jackie Norris could be a candidate for office someday. Whether or not that happens, this power couple’s advice and support will be sought after among Democrats thinking about running for governor in 2018 or for U.S. Senate in 2020.

I enclose below excerpts from John Norris’s bio on the SPPG website.

P.S.- As a former history and literature major, I loved the shout out to a liberal arts education in the SPPG bio of Norris’s partner Knott: “In college Brad studied liberal arts because he knew if he learned to read and write and also understand human behavior, he would be logical, creative and employable.” Math and sciences are important for obvious reasons, but too many politicians pretend there’s no value in higher education outside STEM subjects.

UPDATE: I forgot to mention that on October 3, Jackie Norris started working as president and CEO of Goodwill Industries of Central Iowa. Added below excerpts from that organization’s September 15 news release.

He was recruited to work for Congressman Harkin’s Iowa staff and drove the infamous “Harkinmobile” traveling from community to community. He honed his guitar talents, his casework abilities, and his personal skills. He began organizing community events to highlight Harkin’s work, was drawn into fundraising, and, eventually, was recruited to manage a gubernatorial campaign. He went back to his roots during the 1980s Iowa Farm Crisis working for Prairiefire and the Farm Unity Coalition. There he first became active in policy change and advocacy in the Iowa state legislature.

Before long, Jesse Jackson tracked him down to guide his Iowa Presidential race. For John, it was an awakening. His work extended across the country to organizing events and actions with Caesar Chavez, elected officials, musicians, and arts and entertainment activists. In ’93 he organized the Farm Aid Concert in Ames, Iowa featuring Willie Nelson and Neil Young.

Following his Farm Aid work he decided to do what he had wanted since he was nine years old – go to law school. Norris entered the University of Iowa College of Law accelerated program, graduating in two years. Then began a series of key political and policy positions – first as Chief of Staff for Iowa’s newest Congressman, Leonard Boswell. Shortly thereafter, he was elected State Chair of the Iowa Democratic Party. When Tom Vilsack was elected, he became Governor Vilsack’s Chief of Staff, eventually joining Vilsack as the U.S. Secretary of Agriculture’s Chief of Staff in 2009. In the midst of working for the Governor, he took time to manage John Kerry’s 2004 Presidential campaign.

Along life’s interesting way, John ran for Congress, and he bought an historical hotel in Greenfield, Iowa where he ran a restaurant. Not insignificantly, he also got married to Jackie, a teacher who was also active in politics and policy.

During Vilsack’s first term as Governor, electric restructuring had become a significant economic and infrastructure issue. Vilsack tapped John to Chair the Governor’s Working Group on Electric Restructuring and would later appoint him Chairman of the Iowa Utilities Board.

This work led to a passion and a deep policy understanding of one of the country’s most significant issues and challenges, and President Obama twice nominated, and the Senate confirmed, him as a Commissioner on the Federal Energy Regulatory Commission.

His most recent position took the Norris family to Rome, Italy, on a Presidential appointment as the U.S. Minister-Counselor for Agriculture to the United Nations Food and Agricultural Organization and the World Food Program. Over the next two years, “Adoro Roma!” was often heard around the Norris household.

Even with all this exciting and important work, John and Jackie wanted to load up their three boys and move back to Iowa where they both believe they can more actively make a significant difference, simply enjoy life, and make things better.

“We really wanted to get back to Iowa where my roots are, and I have a deep love of this state. It has become Jackie’s home, and the boys love being in Iowa. I feel privileged for the opportunity to partner with my most talented colleague, Brad Knott, in our new, exciting venture – owning SPPG. It is a solid company with a great 30-plus year reputation. It gives us opportunities to work on a variety of issues and policies that support Iowans and so many others.” Norris continued, “Our true love is policy. It is not about partisan politics – for us, it is important to seek out what is right for the greatest good and determine the best way to accomplish the community and state’s goals. Of course, it is critical to understand politics, but Brad and I continue to see our mission based in policy-based solutions.”

From a September 15 press release by Goodwill Industries of Central Iowa:

Goodwill Industries of Central Iowa announced today that Jackie Norris will become president and CEO-elect of the organization effective October 3. Norris succeeds Marlyn McKeen, who has served in the role of CEO for more than 30 years and will retire at the end of 2016. McKeen guided Goodwill through unprecedented success, starting with a small organization with one location in 1986, to the multi-faceted service company it is today with an annual revenue of more than $20 million, 19 retail locations and 400 employees serving a 22-county area. […]

Bell said following McKeen’s retirement announcement, the board immediately began a very intensive search process to find the next president and CEO, and everyone is more than confident Norris is the right person to lead Goodwill well into the future.

With extensive experience in guiding growth for companies and organizations, Norris returns to Iowa to continue to strengthen the focus and outreach through customer shopping and donating while simultaneously providing more services to Goodwill of Central Iowa’s clients, raising awareness and elevating the profile of Goodwill Industries as a whole. Norris will continue to engage Goodwill Industries and its board, staff and clients in a variety of ways, while also evolving the organization’s strategy, market presence and retail emphasis.

“Iowa is truly home for us,” said Norris, who has three sons with husband John Norris and most recently lived in Italy for two years following their time in Washington, DC. “This opportunity came along at the perfect time in our search to return to Iowa and very much fits the type of service that I am passionate about. We will continue to be a leader through our work, and together we will explore new opportunities, just as Goodwill Industries has done for decades.” […]

Prior to being named president and CEO of Goodwill Industries of Central Iowa (effective December 1), Jackie Norris spent more than 20 years managing strategic planning and corporate initiatives for a variety of organizations. Described as an “innovative and seasoned leader,” Jackie has spent her entire career working with individuals and organizations to succeed —through budget and company growth as well as service and social growth. Combining her experience in nonprofit and academia as well as a history with national and statewide political arenas, Jackie has worked with teams to create, develop, and manage numerous strategic campaigns and initiatives from inception to implementation, always with a specialization in service and volunteerism.

Specific career highlights from 1992-2016 include: