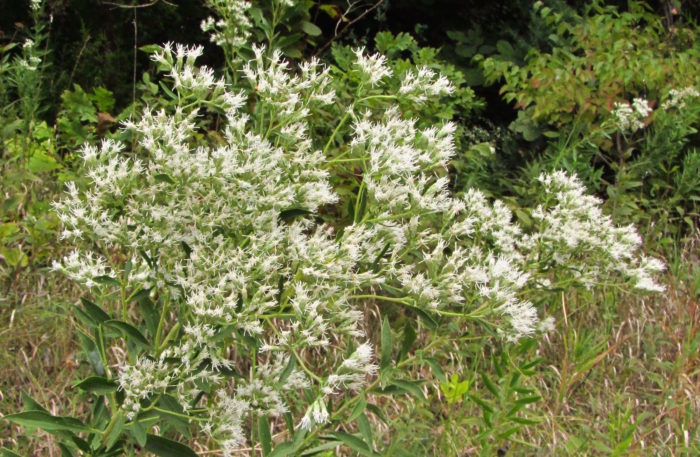 You don't need to venture into a high-quality prairie or wooded area to find today's featured plant. Tall boneset (Eupatorium altissimum) grows well on sunny or partly shaded ground in a range of habitats: "open woods, thickets, prairies, along railroads, [or] waste areas."

Sometimes known as tall thoroughwort, this member of the aster family is native to most of the U.S. east of the Rocky Mountains.

Some trivia before we get to the photographs: according to the Friends of the Eloise Butler Wildflower Garden website, the 40-some plant species with Eupatorium as the first part of the Latin nomenclature (including common and tall boneset) are "named after the Persian general Mithridates Eupator who is said to have used plants as a medicine and in his personal quest to become insensitive to poisons."

As usual, the Illinois Wildflowers and Minnesota Wildflowers sites are good resources for botanically accurate descriptions of tall boneset foliage, flowers, and seeds.

While the leaves along the stems of common boneset are distinctive, other related species--such as false boneset, late boneset, and tall boneset--are tricky to distinguish from one another. I'm grateful to John Pearson of the Iowa Department of Natural Resources for identifying the plants pictured below as tall boneset. He explained, "Late Boneset (E. serotinum) has leaves with serrate margins; Tall Boneset (E. altissimum) has leaves with entire margins. False Boneset (Brickellis eupatoroides) has slightly toothed leaves."

The delicate flowers of Late Boneset closely resemble the flowers of other Bonesets, such as Eupatorium altissimum (Tall Boneset) and Eupatorium perfoliatum (Common Boneset), in both color and structure. These Bonesets can be distinguished readily from each other by an examination and comparison of their leaves. Tall Boneset has leaves that are pubescent, more narrow, and less coarsely serrated than Late Boneset, while Common Boneset has leaves that wrap around the stem and are without petioles.

The stems and leaves on this plant (growing in front of some black-eyed Susans) suggested tall boneset to Pearson:

Stems can be green or "tinged reddish brown":

Tall boneset plants are not particularly tall, compared to Iowa natives like tall blue lettuce, rosinweed, or compass plant. Supposedly they can reach heights between two and six feet. Most of the plants I've seen have been between three and five feet tall.

In mid-August, tall boneset plants were just starting to bloom along the Windsor Heights bike trail behind the Iowa DNR building on Hickman Road:

Tall boneset flowers "superficially resemble" those of white snakeroot, and the two plants often start blooming around the same time. However, snakeroot tends to grow in shadier areas and has very different leaves.

Boneset plants can stand upright or grow at a slant:

Gardeners may appreciate this advice from the Illinois Wildflowers site: "This plant provides some white color to a fall landscape that is often dominated by forbs with yellow flowers and the brown color of dried-out grasses. This is the easiest boneset to grow in dry sunny areas. Some people may mistake this plant for a weed, which it is to some extent."

As a sucker for tough native plants with weed-like qualities, I was happy to find tall boneset plants thriving on disturbed ground near a Des Moines construction site in mid-September:

This tall boneset was growing near a sidewalk on the north side of Hickman Road in Des Moines. The purple flowers in the foreground are chicory, a European native that has become naturalized throughout the U.S. and Canada.

Tall boneset flowers attract "many kinds of insects, including long-tongued bees, short-tongued bees, wasps, flies, small butterflies, skippers, beetles, and plant bugs. Among these, wasps and flies are particularly common visitors." The colony of plants I photographed in mid-September were covered with pollinators. I was particularly struck by this butterfly, which others later identified for me as a common buckeye.

Lots of bees were crawling all over the flowers on this tall boneset plant:

Some kind of wasp is sampling nectar on the left side of this picture. The yellow flowers behind the tall boneset are common sneezeweed.

A fly and a bee enjoying the nectar:

In early October, this tall boneset has gone to seed (upper right corner), even as flowers continue to bloom on other parts of the plant.