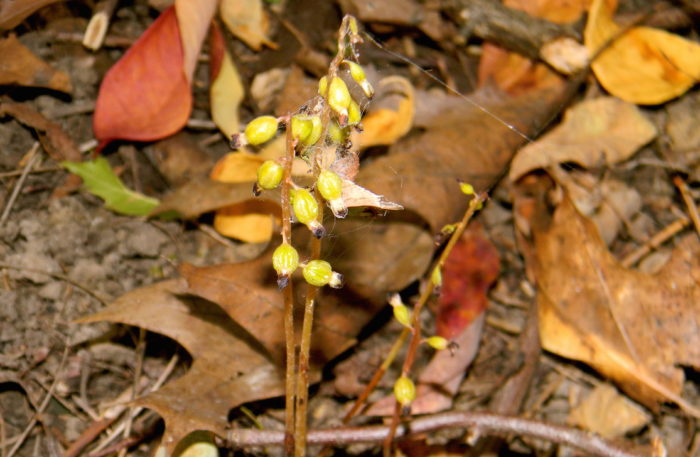 This spring, Iowa wildflower Wednesday featured a very small, and more commonly known woodland orchid, the Showy Orchis. It is a notable early spring find, and I always look forward to visiting the woodlands for its appearance.

Some of us don’t trek the woodlands in the fall as often, as the prairies and vibrant blooms of roadsides keep us forever in awe and discovery. Late August, September and October are great times to visit the woods, and if you are looking for orchids, a sharp eye and delicate step bring fascinating finds. Iowa’s fall woodlands hold a few inconspicuous and rare little orchids. Oval ladies’-tresses (Spiranthes ovalis) and Autumn coralroot (Corallorhiza odontorhiza) are two of the most common.

Good resources on Iowa’s orchid species: Wild Orchids of the Prairies and Great Plains Region of North America by Paul Martin Brown, and Orchids in your pocket: A guide to the Native Orchids of Iowa by Bill Witt.

Spiranthes comes from the Greek words speira meaning “spiral” and anthos meaning “flower”, Ovalis (oval). Oval ladies’-tresses have been considered “charming” by those who trek for Iowa orchids. The flowering period is mid September in Iowa, and the height can vary from three to twelve inches tall. Two to four basal leaves are one to six inches long and 1/4-3/4” across. There are sheath-like alternate leaves located along the lower half of the flowering stalk during the blooming period.The flowers are white to a light green and grow along the upper part of a slender stem in a tight, vertical spindle giving it a corkscrew or spiral appearance. Blooming from the bottom up, the ovaries swell simultaneously on each individual flower. The plants vary from one to two feet tall. The spikes may be one to six inches long.

There are two varieties of this perennial species; var. erostellata (northern oval ladies’-tresses) and var. ovalis (southern oval ladies’-tresses). The northern var. erostellata (Iowa) are self-pollinated due to the lack of rostellum (a projection on the stigma), and the flower is rarely fully open. Such delicate orchids can be found in mesic woodlands and floodplains.

Upon personal observation in the Marion County parks, they are becoming more common in disturbed areas.
Photos were taken at Cordova Park (woodlands and restored shortgrass prairie) and Roberts Creek Park, north side of Lake Red Rock in Marion County.

Basal leaves and alternate leaves on an Oval ladies’-tresses plant.

The largest and most surprising find of Oval ladies’-tresses this year was located within a restored short-grass prairie amidst the little bluestem and goldenrod. The spiral appears better when you are at a little distance.

Oval ladies’-tresses are most often found in disturbed areas of rich, damp woodlands.

Blooming from the bottom up, this orchid was noticed early in its blooming period.

It seems as though the flowers are never quite fully open, and the ovaries swell simultaneously on each flower within the inflorescence.

The name refers to the stems that are underground. The rhizomes appear like ocean coral and the tooth-like swollen base of the scape. The leaves are sheaths surrounding a stalk of the inflorescence. Autumn coralroot, sometimes referred to as Fall coralroot, is not only very tiny, it lacks in chlorophyll and becomes quite camouflaged within the fallen debris and woodland floor.

Like other plants that lack chlorophyll, it requires the presence of an ectomycorrhizal fungi within the soil. The fungi transports nutrients from both itself and from the trees forming a symbiotic relationship. The flowering period in Iowa is late August to mid September.

The flower features a very prominent ovary with very small flower parts. Sometimes, we refer to them as tight-lipped orchids. Bill Witt, author of Iowa’s Wild Orchids, notes “the fruit is often well developed when the flowers are still fresh, which suggests that self-pollination may occur early in the development of the flowers.” Coralroot can be three to ten inches tall and have a yellow-green or purplish-brown color midway up the scape. There may be five to twelve reddish-purple flowers with a yellowish-green color cast.

This tiny orchid is native within the prairies and Great Plains region; Arkansas, Illinois, Iowa, Kansas, Louisiana, Missouri, Oklahoma and Texas. In Iowa, they can be located in humus rich soils in upland woodlands and coniferous areas.

Autumn coralroot often goes unnoticed due to its size.

Autumn coralroot is often found by accident. The short stems often flower among the fallen leaves in the autumn months and the coloration makes them difficult to see.

These itty-bitty’s are most often found in a rich calcareous woodlands that border rivers.

The stem appearance is often a bronzy-green color. The sepals are green and bathed with purple. The lip is rarely evident.