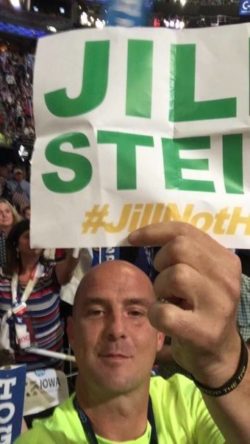 Hey Democratic Party! Wake up and smell what you have been shoveling!

Another perspective on what the Iowa Democratic Party needs to do, from a Bernie Sanders delegate to the Democratic National Convention who then supported Jill Stein for president. -promoted by desmoinesdem

My name is Chris Laursen. I am an activist and political dissident from Ottumwa, Iowa and I am here to tell the truth, a truth we all know. The Democrats have fabricated a facade of being the party of the people, but in actuality they are the party of Wall Street. I am not fooled, and the working progressives of America have woken up to this reality. Establishment Democrats, you enabled the charlatan named Donald Trump to become the leader of the free world. Own it!

We have witnessed the Democratic Party continually degrade into a heaping pile of neoliberal ordure for many years, characterized by voter suppression, media collusion, tsunamis of special interest money, a rigged playing field and millions of disengaged and disenfranchised voters. This last election cycle was reflective of these facts. The party cannot win elections when it alienates half of its base and ignores rural America and undecided voters.

Democrats have lost the White House, both houses of the U.S. Congress and both houses of our Iowa Legislature. Nancy Pelosi is dead wrong when she says, "I don't think Democrats want a new direction." The fact is that if Democrats don't change their direction they are going to wither and die a slow, painful death. Examine the youth vote in the Democratic presidential primary to find evidence of this certainty.

The Iowa Democratic Party's State Central Committee is faced with a very important decision in the forthcoming month. Who will they select to steer the helm of the IDP?

There is a simple, logical litmus test that defines the type of Democrat the IDP chair candidates are deep inside. Did they support Bernie, the one candidate who dared to challenge the Democratic Party to reform itself? Or did they support the most prolific crime family in the history of the United States?

Which candidates for chair will ensure that the IDP supports progressive candidates in future elections? Iowa voters need more voices to select from than the usual urban professionals who willingly toe the party line. The IDP must start supporting the reformers, the subversives, the ones who will shake things up.

Which candidates for chair will resist giving thousands upon thousands of IDP dollars to politicians like Dave Loebsack? I don't want to give my hard-earned money to a party that in turn gives it to corporate lap dogs. Don't worry — corporate America will take care of their financial needs.

None of the candidates for chair are perfect, but there are clearly a few who stand out amongst the others.

Democrats, you are not entitled to my vote and support. You have to earn it. The jersey I wear is not blue or green. My jersey is the color of everyday Americans who are disaffected with the load of B.S. that they are spoon fed every election season.

If you want progressive fighters back in your fold, shape up! If you want to build the party and not tear it down further, get it together. If you want to attract the silent majority who are sitting on the fence, start listening. And if you want to start winning again, start selecting party leaders who want to reform.