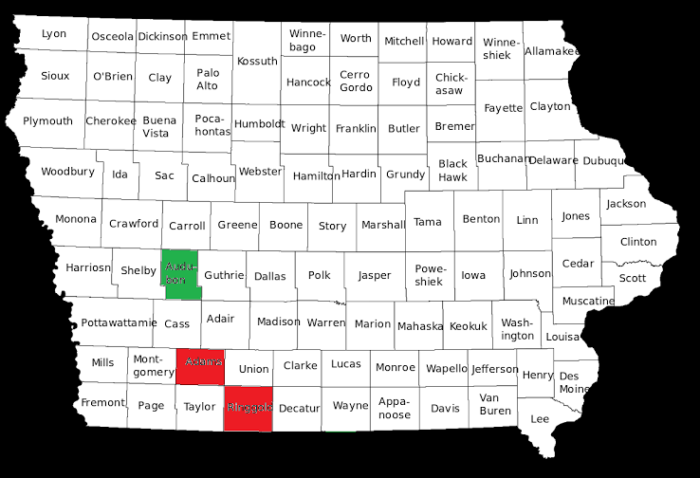 Continuing a 99-part series. You can find previous entries here. -promoted by desmoinesdem

This week I will review our third-smallest county in terms of population, Audubon County.

The 2010 census found 6,119 people living in the entire 443 square miles (22nd smallest) that are within Audubon County. Audubon County is directly west of Des Moines. According to Google Maps, the county seat of Audubon County, Audubon, is 84.8 road miles from the Iowa State Capitol building in Des Moines.

Audubon County was founded in 1851 when it was split from Pottawattamie County. And yes, it was named after John James Audubon. The highest population in the county was 13,626 in the 1900 census. Audubon County has lost population in every census since that time. The racial makeup of the county was 99.17 percent white, 0.15 percent Black or African-American, 0.09 percent Native American, 0.19 percent Asian, 0.03 percent from other races, and 0.38 percent from two or more races. 0.48 percent of the population were Hispanic or Latino of any race.

7.07 percent of the population live in households with income at or below the poverty level. Average personal income was estimated at $42,717 which was the thirteenth-highest of Iowa’s 99 counties. Audubon County had the 33rd lowest unemployment rate in 2010, 5.6 percent. (As of November 2016 the unemployment rate was 2.1 percent.) In terms of educational attainment, Audubon County has the 23rd lowest rate of residents having received a bachelors degree or higher, 15 percent.

Audubon County is currently a part of the fourth Congressional district and has been represented by Steve King (R) since 2003.

Since 1960, the Republican Nominee has carried Audubon County nine times and the Democratic Nominee six times, as recently as 2008. Romney carried Audubon county in 2012 by only 5.5 percent while Trump won in 2016 with a 31 percent advantage!

President Bill Clinton won Audubon County by 15 percent in 1996. The Audubon County Board of Supervisors has a 2-1 Republican majority. The county sheriff is an independent, and county auditor is a Republican.

While Audubon County was an electoral disaster for Democrats in 2016, at the presidential level it has been competitive as recently as 2012. Many 2016 election post mortems have pointed out the disastrous (for Democrats) collapse of support in rural areas that have little demographic diversity. Audubon County is an another almost perfect example of this problem.

Democrats cannot expect to find electoral success when losing counties by 31 percent in Presidential elections, 55 percent in Senate elections, 27 percent in US House elections, and definitely not by failing to have a candidate for Iowa Senate.