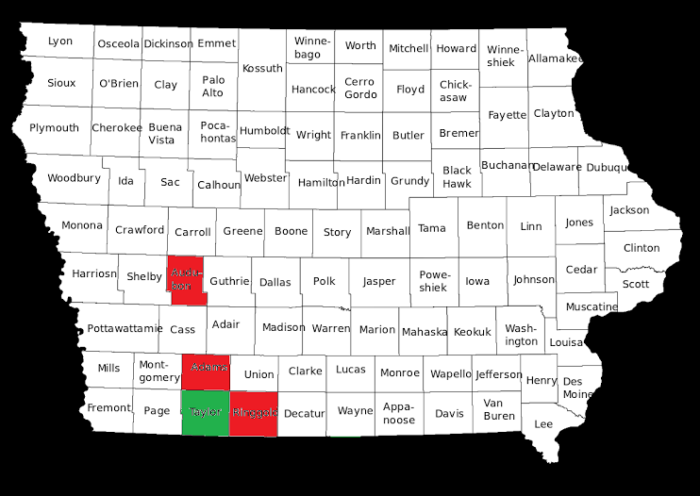 Previous installments in this series can be found here. -promoted by desmoinesdem

This week I will review our fourth-smallest county in terms of population, Taylor County. The 2010 census found 6,317 people living in the entire 532 square miles (36th smallest) that are within Taylor County. Taylor County is south and west of Des Moines. It borders on two of the other sparsely populated counties we have already reviewed, Adams and Ringgold.

According to Google Maps, the county seat of Taylor County, Bedford, is 115 road miles from the Iowa State Capitol building in Des Moines. Taylor County was founded in 1847 when it was separated from Page County and was named after General (and soon to be president) Zachary Taylor.

Some 8.50 percent of the population live in households with income at or below the poverty level. Average personal income was estimated at $37,052 which was the 43rd lowest of Iowa’s 99 counties. Taylor County had the 33rd lowest unemployment rate in 2010 (tied with several others), 5.6 percent. (As of November 2016 the unemployment rate was 2.4 percent.) In terms of educational attainment, Taylor County has the 4th lowest rate of residents having received a bachelors degree or higher, 12.5 percent.

Taylor County is currently a part of the third Congressional district and has been represented by David Young (R) since 2015.

The Taylor County Board of Supervisors has a 2-1 Republican majority. The county sheriff is a Republican, as are all other county elected officials.

Taylor County was an another electoral disaster for Democrats in 2016. Many 2016 election post mortems have pointed out the disastrous (for Democrats) collapse of support in rural areas that have little demographic diversity. Taylor County is an another almost perfect example of this problem. Democrats cannot expect to find electoral success when losing counties by 45 percent in Presidential elections, 55 percent in Senate elections, 51 percent in US House elections, and definitely not by failing to have a candidate for Iowa Senate or Iowa House.