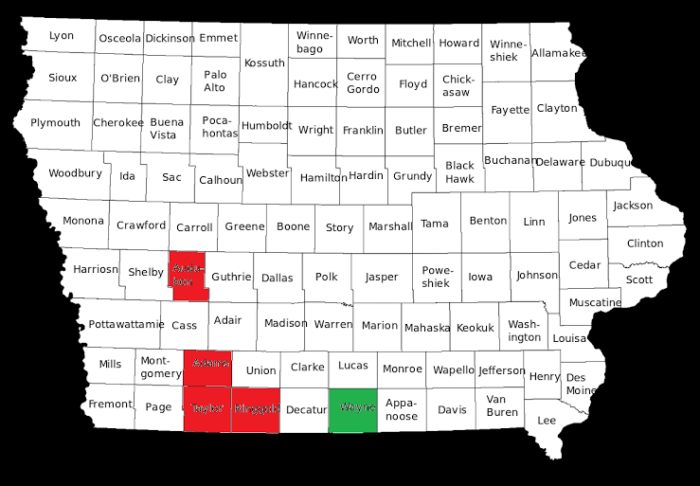 This week I will review our fifth-smallest county in terms of population, Wayne County. The 2010 census found 6,403 people living in the entire 527 square miles (34th smallest) that are within Wayne County. To put this in perspective, it is roughly equal to population with the city of Oelwein. Wayne County is south and just a bit east of Des Moines. According to Google Maps, the county seat of Wayne County, Corydon, is 70.5 road miles from the Iowa State Capitol building in Des Moines. Wayne County was founded in 1846 from Appanoose County and was named after Revolutionary War General Anthony Wayne.

As we’ve seen as another trend in these first five rural counties, the highest population in the county of 17,491 was in the 1900 census. Wayne County has lost population in every census since that time.

Some 10.8 percent of the population live in households with income at or below the poverty level. Average personal income was estimated at $28,555 which was the 5th lowest of Iowa’s 99 counties. Wayne County had the 48th highest unemployment rate in 2010 (tied with several others), 6.2 percent. (As of November 2016 the unemployment rate was 3.1 percent.)

In terms of educational attainment, Wayne County has the 8th lowest rate of residents having received a bachelors degree or higher, 14.1 percent.

Wayne County is currently a part of the Second Congressional district and has been represented by Dave Loebsack (D) since 2007.

Since 1960, the Republican Nominee has carried Wayne County 10 times and the Democratic Nominee 5 times, with the most recent Democratic victory in 1996.

The Wayne County Board of Supervisors has a 2-1 Republican majority. All county elected officials except the County Recorder are Republican.

Wayne County was an another electoral disaster for Democrats in 2016. Many 2016 election post mortems have pointed out the disastrous (for Democrats) collapse of support in rural areas that have little demographic diversity. Wayne County is an another almost perfect example of this problem. Democrats cannot expect to find electoral success when losing counties by 46 percent in Presidential elections, 53 percent in Senate elections, and definitely not by failing to have a candidate for Iowa Senate. At least there was a Democrat in the state House race.

The ability of Dave Loebsack to limit his margin to losing by 19 percent as compared to the huge margins at the top of the ticket was key to a Democratic victory in the US House race. Looking back at the 2014 elections, Joni Ernst defeated Bruce Braley in Wayne county by 30 percent, and Terry Branstad defeated Jack Hatch by 43 percent, so Democrats losing in the county by wide margins is a continuing trend.