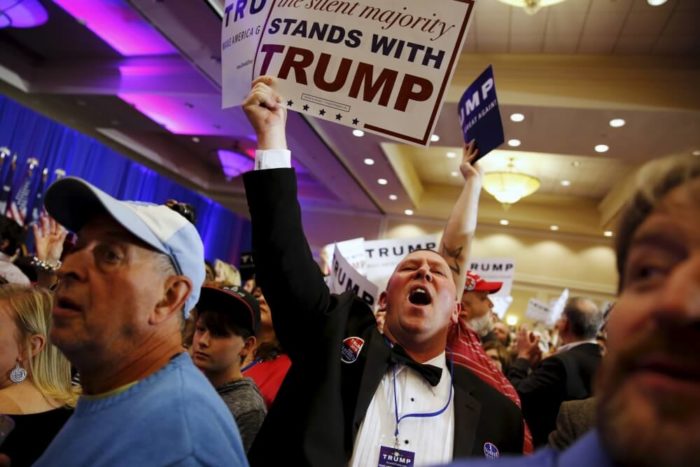 An important message from Gary Kroeger, as the actions of a small minority of protesters in Berkeley are receiving national attention. -promoted by desmoinesdem

What is the greatest threat to our political system? Oligarchic control? Elections manipulated by wealth? Economic disparity?

Those are all issues in crisis, but they are results of inattention to foundational principles. The root cause of our dysfunction is: Hypocrisy.

Until we discover the enlightenment that allows us to be honest; that mediates the deflection of accountability; we will continue on a course of political divides that will deepen, obscure reality and remove us from responsibility.

This is evidenced as many of the Christian Right celebrate the election of a man who should be considered the anti-thesis to their cause (if that cause is to be pious and principled). A man who has been married 3 times, which wouldn’t necessarily be a moral crime itself except for the fact that he openly conducted affairs before each marriage ended.

And he is on record as a braggadocious sexual assailant.

That hypocritical stance holds righteously firm as the “Moral Majority” absolves this contradiction by pointing out that Bill Clinton was just as bad. But this is false equivalence because they never supported Bill Clinton. In fact, they vilified him for the very reasons they now dismiss as just “locker room talk.”

For the record, I never excused President Clinton’s behavior. I, like many others, was critical of his character and I even wrote him a letter to express my displeasure. He wrote back agreeing with me.

After this election and the eruption of protest that resulted, I overheard someone stating: “We didn’t protest Obama when he won, but look at what the liberals are doing to Trump!”

That has to be a transcendent definition of hypocrisy.

After Obama was elected I saw pictures of him as a chimpanzee, and photographs of him being hanged in effigy.

He became a Kenyan Muslim to nearly 30% of the right and Donald Trump himself carried the “Birther Movement” to the extreme in an attempt to prove that Obama was not even qualified to be President.

The entire Republican Party agreed to, and followed, the directive of Senator Mitch McConnell to obstruct every single measure the new President offered in order to “destroy his presidency.”

Imagine if there were a recording of a pre-presidency Obama saying that he “grabs a woman by her p…” Would there have been any containment of the Fox-led right wing’s condemnation of the man? Their fury/delight would have created enough wattage to declare energy independence.

Imagine pictures surfacing of Michelle Obama naked before becoming First Lady. The right wing would become apoplectic; the blogosphere would have exploded with nasty memes to degrade her conduct. In fact, they did when the First Lady was actually ostracized for having worn a strapless, evening gown to a White House function.

And so when people protest the fact that a man is now our President who insulted women for their looks (not even privately, but on national television regarding another candidate) – insinuated that a moderator was menstruating- who belittled a physically challenged journalist- who openly brags of sexual exploits- who besmirches the Constitutional premise of free speech…

It is false to condemn their dissent.

Nevertheless, Donald Trump was sworn in as the 45th President of the United States and I, for one, will continue to do everything I can to move the needle to improve life for Iowans and Americans, and work for world peace to protect the lives of our children. I believe, sincerely, that this can only happen with cooperation from all sides on the local, state, and national level. I will conduct myself respectfully and honorably.

I am not surprised by, however, nor do I condemn, the millions of people who, at this particular time, are angry, frightened, sad, hurt, or profoundly perplexed, and are dramatically demonstrating those feelings.

Yet I implore anyone who reads my posts or with whom I may have any influence – Keep protest within the parameters of peaceable assembly. Violence is also hypocritical.

We lose ground when we do not stand on the higher moral ground.