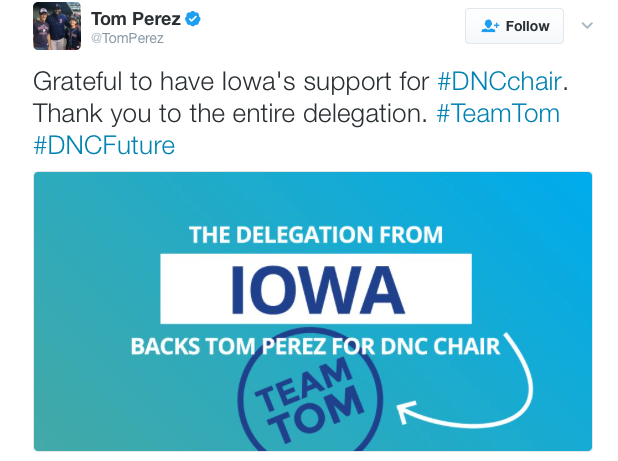 The next Chair of the Democratic National Committee needs to be a proven leader with the ability to bring people together and get things done. We believe that Tom Perez has the skills, experience and qualifications to lead Democrats to victory in the 2017 and 2018 elections. Throughout his career, Perez has been a strong advocate for collective bargaining, fighting for worker’s rights and job creation. As the son of immigrants, Perez understands that everyone deserves a fair shot to achieve the American dream. There are many qualified candidates running for DNC Chair. But our delegation made a decision together that Perez is the best choice for Democrats nationwide and the best choice for Iowa Democrats moving forward.

In addition to Eadon, Iowa’s voting members on the DNC are Vice-Chair Andrea Phillips, Scott Brennan, Sandy Opstvedt, and Jan Bauer (at large).

Former Iowa Governor and U.S. Secretary of Agriculture Tom Vilsack endorsed Perez last month, saying “he understands the necessity of the party spending time and resources, and being physically present in rural areas, not just the month or two before the election, but throughout the year.”

Eight–or maybe nine–candidates are competing for the top job on the DNC. They outlined their goals, priorities, and strengths in these short essays for CNN. Perez has emerged as the leading establishment choice, though multiple ballots are likely to determine a winner.

U.S. Representative Keith Ellison of Minnesota is the preferred candidate for many progressive Democrats, thanks to endorsements from Senators Bernie Sanders and Elizabeth Warren, among others. Ellison has the most backing from organized labor, though several large unions have backed Perez.

Although I haven’t followed the DNC chair race closely, the field of candidates seems very strong, so I am confident the new leader will be an improvement on Debbie Wasserman-Schultz. I’ve seen some Sanders activists declare on social media that they will be “done” with the party if Ellison doesn’t get the job. I hope they don’t overreact if Perez wins tomorrow. The DNC chair is more of a manager than an ideological leader, and anyway, Perez is not a conservadem.

UPDATE: I should have mentioned that U.S. Representative Dave Loebsack, Iowa’s only Democrat in Congress, endorsed Ellison for DNC chair in November. He discussed his choice during a visit to the state capitol in Des Moines on Wednesday. James Q. Lynch reported for the Cedar Rapids Gazette,

Loebsack is backing fellow U.S. House Rep. Keith Ellison of Minnesota as Democratic National Committee chairman. He believes Ellison can bring together the Hillary Clinton and Sen. Bernie Sanders factions of the party.

“He’s got the same 50-state strategy that Howard Dean had. He’s talking about working at the very grass roots level to capture the energy we see out there,” Loebsack said.

“We need to interject energy and resources into the Democratic Party at all levels,” said Mike Gronstal. “To do that, we need Keith Ellison as DNC Chair. He will bring our party together, focus on turnout and bring in the grassroots. I am confident that Keith will do a phenomenal job.”

Also should add that while I haven’t seen this sentiment expressed as often, some Perez supporters have threatened to leave the Democratic Party if Ellison wins tomorrow’s election. That would be foolish in my opinion.

SECOND UPDATE: A press release from the Perez campaign for DNC chair included additional comments from the Iowa delegation.

Statement from the Iowa Delegation to the DNC:

“Iowa Democrats know that, following a year in which a Republican presidential candidate won Iowa for the first time in a decade, we need a leader who is ready on Day 1 to rebuild our party and make sure Democrats competes in every ZIP code. Our delegation believes that Tom Perez is the best candidate to take on that responsibility – and get our party winning again. He has a proven record of turning around struggling organizations, whether it was the Civil Rights Division of a Justice Department decimated by years of Bush Administration neglect or a Labor Department rated the second worst place to work in the federal government. The Justice Department got back to the business of protecting Americans’ rights and the Labor Department became the cornerstone of President Obama’s economic opportunity agenda. We need this sort of turnaround artist at the DNC to combat the disastrous Republican policies in our state, like so-called ‘right to work’, by electing more Democrats up and down the ballot. We are proud to endorse him as our next DNC chair.”