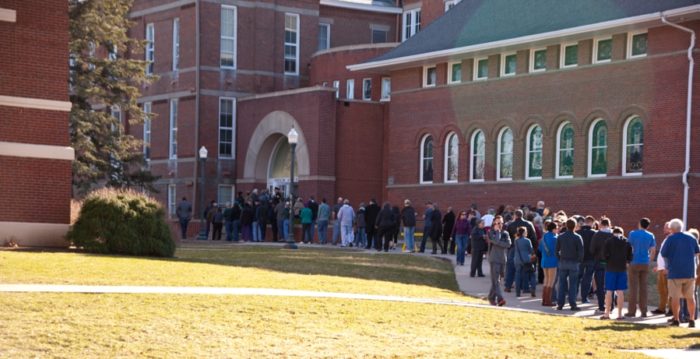 Thanks to Stefanie Running for talking with Iowans who had hoped to question Senator Joni Ernst yesterday. -promoted by desmoinesdem

It was unusually warm for St. Patrick's Day in Des Moines. Despite being spring break week for Drake University, the campus where Senator Joni Ernst chose to hold her town hall had remarkably little available parking. I arrived about 4:45 p.m., fifteen minutes prior to the start of the event, but was unable to join the throng inside; Sheslow Auditorium had reached capacity.

There were about 200 of us still outside, unsurprised but still disappointed. We were given the opportunity to fill out the question cards, the same as our comrades who made it inside. It was a consolation prize of sorts, knowing the questions wouldn't be asked. A few people wrote their names and their questions, the rest either left or milled about. A few groups crowded around those who were playing live-streams the discussion on their phones.

I was able to speak to a handful of folks who had come to hear Ernst address their concerns, ask their own questions, or see if she actually engaged honestly. Carlene was very friendly, as were most people I approached. She was concerned about health care for older adults and recent reports that the proposed American Health Care Act will increase costs for seniors. Rosemary greeted Carlene as we walked around to the other side of Sheslow. The friends were glad to share more of their concerns. Rosemary indicated an overwhelming number of topics were on their minds. She wanted Joni Ernst to hear her message: "We are here, and you need to listen." She said that the new health care bill was a big issue. She had recently emailed the senator about the gross deficiencies in necessary mental health care services. She sent a similar message to Senator Chuck Grassley and received boilerplate non-answers from both. Ernst remarked on Obamacare as a disaster, and said they had to make changes. Andrea came to express concerns about the cuts to the Environmental Protection Agency, National Endowment for the Arts, and other humanities related programs. She noted that those programs encompass a very small part of the budget relative to increases being handed to larger departments like the Department of Human Services and the military. The Millers came to discuss health care and gun control. Alan is worried about the 24 million Americans who will lose insurance and health care with a repeal or replacement of the Affordable Care Act. The family is also concerned about the GOP relaxation of gun laws, and the ease in which a domestic violence perpetrator can access guns. Josh, who was gracious about the fact that I repeatedly called him Jason (perhaps because he was wearing a Jason Isbell tshirt), wanted to know if Ernst was ever going to hold President Donald Trump accountable for his lies about wiretapping as well as the other lies Trump frequently repeats. He wants Congress to hold Trump accountable, but he seemed to have little hope that they would. Allissa and Josh had just met outside of Sheslow and were discussing their concerns when I interrupted them to ask their input. Allissa is a very warm and personable young woman who was deeply concerned about the repeal of the ACA. She noted that it was very hard to determine who this new American Health Care Act would help, and that it would kick millions off of the insurance they have. Kristi came prepared with data to back up her concerns. She wanted to know why Senator Ernst is putting party politics over what is really important to the people of Iowa. She noted that 77 percent of Iowans support Planned Parenthood, yet Ernst supports defunding. Approximately 6 out of 10 Americans don't support the travel ban, and 75 percent don't want a repeal of ACA before an actual viable option for replacement is on the table. Kristi wants Ernst to represent her actual constituents, and she'd like to know why Joni refuses to do so. Vicki noted the unbelievable number of issues that are part of our lives now. She wants us to focus on a pathway for undocumented immigrants to gain residency and citizenship, rather than building walls. She supports our designation as a sanctuary city, and fully believes that our neighbors are our friends. She supports Planned Parenthood and believes that women should have the right to choose where they receive their health care. She is unhappy with the GOPs efforts at voter suppression. She believes that Education Secretary Betsy DeVos's voucher program is bad for our education system. She wants to see Social Security fully funded. She supports the Standing Rock protesters, and wants to see more funding for renewable energy like solar and wind. She believes we need gun reform with background checks. She's disappointed in the recent news of the defunding of Meals on Wheels and the Peace Corps. As a former Peace Corps member, she believes in increasing funding for "person to person diplomacy".
She is interested in attending the upcoming March for Science in DC and hopes to see a change in the anti-science sentiment coming out of Washington.

Vicki is very engaged, and a big fan of Bleeding Heartland. Tim didn't find out about Ernst's visit until the last minute, but felt it was important that he attend. He appreciated the senator's willingness to hold this town hall in a predominantly liberal community, where some of her colleagues won't visit. But he also noted that the small venue had unnecessary restrictions, limiting the ability of people to attend. He came to see how open Ernst is to questions this time, and whether she was willing to answer honestly, since a previous town hall he had seen recently featured only one question and no real answers from Ernst.

This was my first volunteer photography "assignment" for Bleeding Heartland. Thank you Laurie (desmoinesdem) for letting me represent BH in our community. I met a lot smart and engaged people. I hope to provide more photo reports in the future.