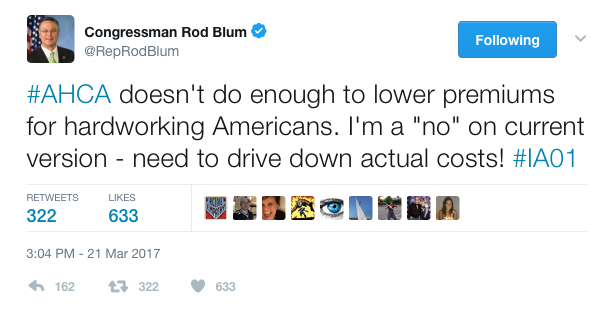 A little more than two weeks after House Republicans released their alternative to the Affordable Care Act, U.S. Representative Rod Blum (IA-01) announced on Twitter that he will not support the American Health Care Act. According to Blum, the bill “doesn’t do enough to lower premiums for hardworking Americans. I’m a ‘no’ on current version – need to drive down actual costs!” Speaking to The Hill the same day, he added, “We need real competition driving prices down. We don’t need the government telling us what should be in an insurance policy. The government has a role to play. We need to help people who need the help.” Blum had previously said directly and through staff that he was studying the bill.

Like all other House Republicans, Blum has voted multiple times for “Obamacare” repeal bills that would have done nothing “to lower premiums for hardworking Americans,” let alone “drive down actual costs.” However, the stakes are higher now that a GOP-controlled Senate and Republican president might enact new health care legislation. I don’t know what kind of plan Blum is envisioning, but there is no magic wand Congress can wave to “help people who need the help” without the government setting minimum standards for health coverage and regulating the market in other ways.

Blum belongs to the House Freedom Caucus. Although that group has not taken an official stand against the AHCA, some of its prominent members are on various “whip counts” of Republicans opposing the bill. Since no Democrats are backing a plan that would leave millions uninsured and drive up costs for millions more, House leaders can’t spare more than 21 GOP members in any floor vote on their health care bill. Some Congress-watchers have already counted more defectors than that.

Representative Steve King (IA-04) was among the first House Republicans to come out against the AHCA. He supports “rip it out by the roots” repeal of “Obamacare” instead. I doubt the amendments unveiled this week to satisfy House conservatives will change his mind. UPDATE: A staffer told the Des Moines Register’s Jason Noble on March 22 that King is “undecided–leaning no” on the bill. SECOND UPDATE: White House spokesperson Sean Spicer announced that King will support the bill. Seeking confirmation. A member of the House whip team told Jonathan Martin of the New York Times that King “went from no to yes in the WH [White House] today after assurances about Senate tweaks.” UPDATE: King released a video statement explaining his decision to support the AHCA. He’s still committed to repealing Obamacare. He hopes Republicans will strip “essential health benefits” out of the bill, paving the way for other measures he wants, like health savings accounts and selling insurance across state lines. He said he told President Donald Trump in a White House meeting today that he worked very hard for total repeal of the Affordable Care Act, but that legislation won’t be brought up this year, because leaders don’t think they can get the votes. He said he had a “firm commitment” from Senate Majority Leader Mitch McConnell for a manger’s amendment to strip out “mandates” and “essential health benefits” from the House bill. King views this bill as the “best chance” for the “closest thing” to total repeal of Obamacare in the current political environment. He later tweeted that he and Trump had negotiated “the best possible improvement on ObamaCare Repeal.”

Representative David Young (IA-03) has repeatedly said he is studying the bill and the Congressional Budget Office analysis of its impact. Young’s staff have told constituents this week that he is still undecided. I consider him likely to vote yes if the bill comes to the floor–which may never happen, if leaders conclude they don’t have the votes. For what it’s worth, The Hill’s whip count put Young in the “leaning/likely no” camp because he said on March 15, “I want to make sure it is something that works in the end for all Americans, and that it would pass if it gets over to the Senate.” Several GOP senators have said the AHCA will not pass the upper chamber. UPDATE: Young announced in a March 22 statement, “While the American Health Care Act, legislation to repeal and replace Obamacare, is a very good start, it does not yet get it right and therefore I cannot support it in its’ [sic] present form.” I’ve added his whole press release below.

Neither of Iowa’s U.S. senators have clarified how they would vote on the Republican bill. Senator Chuck Grassley has made conflicting statements, telling House members the bill must be changed so that insurance premiums don’t skyrocket for older people not yet eligible for Medicare. On the other hand, Grassley has said Republicans can’t afford to miss what could be their only opportunity to keep six years of promises. Senator Joni Ernst said at town-hall meetings in Cedar Rapids and Des Moines on March 17 that she is studying the AHCA’s potential impact on Iowans and insurance premiums. I hate to break it to her: no alternative plan will magically make cheap insurance widely available while maintaining guaranteed coverage for people for pre-existing conditions and letting children stay on their parents insurance through age 26.

UPDATE: Forgot to mention that the Iowa Hospital Association estimates between 200,000 and 250,000 Iowans would lose their insurance coverage under the Republican plan. More on that story below.

Barbara Rodriguez reported for the Associated Press on March 19,

The Iowa Hospital Association, which represents 118 hospitals, has estimated through statistical data that between 200,000 and 250,000 Iowa residents will lose coverage. Kirk Norris, president and CEO of the association, said the bill would cause people to lose preventive care coverage, increasing emergency room visits and leading to more costs for hospitals.

“Access through that system that we have today, which is a very strong primary care system led by hospitals, will erode, and it will probably erode substantially first in rural Iowa,” he said. […]

AARP Iowa, which has 380,000 Iowa members age 50 and older, said the bill could jeopardize the Medicaid system, which provides health care coverage to children, low-income individuals, nursing home residents and people with disabilities. Roughly 609,000 people in Iowa receive services from the federal-state program, according to the nonpartisan Legislative Services Agency. A little over 154,000 joined in recent years after the state expanded eligibility under the ACA. […]

AARP Iowa spokesman Anthony Carroll said the 2020 changes mean 150,000 Iowa residents could face setbacks — either through reduced services or eligibility. That could also apply to the other Medicaid recipients because of the possible ripple effect of less federal funding. He also said the bill will have negative effects on Medicare, the separate federal health insurance program for people age 65 and older. And there’s concern over the burden on older Americans who may need to spend more to participate in the insurance marketplace.

“While the Affordable Care Act or Obamacare has helped some, it continues to hurt far too many Iowans. It is the reason healthcare continues to be one of the most debated topics in the nation and has been for the past eight years.

Bottom line – we need laws that work for all Americans for all patients – not just some. The ACA was rushed through Congress and to President Obama’s desk which resulted in a failed law that does not work for everyone and a better solution for all patients is needed. And, the problems and costs created by the ACA are only going to get worse with each passing year.

It is a fundamental principle that repeal, reforms and fixes to healthcare are done in the right way, for the right reasons, and in the right amount of time it takes to ensure we avoid the mistakes of the past. We need to be thoughtful and deliberate and get this right to achieve accessible, affordable quality healthcare.

While the American Health Care Act, legislation to repeal and replace Obamacare, is a very good start, it does not yet get it right and therefore I cannot support it in its’ present form.

The foundation of healthcare reform must be personalized, patient-centered healthcare that treats patients like human beings, not a number. That puts you and your doctor, and not politicians, in charge of your healthcare. This is achievable –we just are not yet there.”

Video statement by Representative Steve King after his White House meeting on March 22: