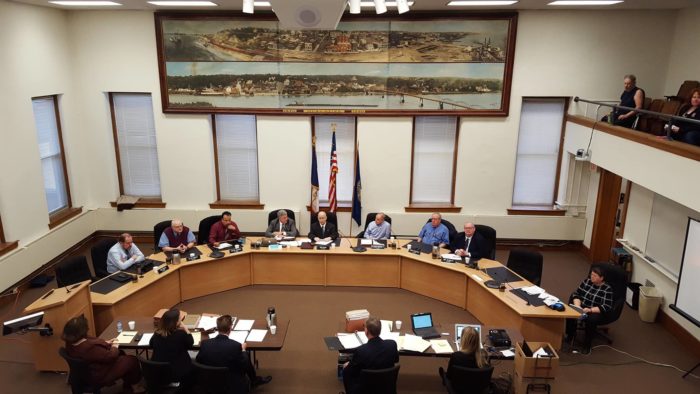 Tracy Leone follows up on the unprecedented power struggle in Muscatine. You can read the charges drawn up by the city attorney here. -promoted by desmoinesdem

On Thursday, March 23, 2017, the Muscatine City Council made history by becoming the first city in Iowa to impeach its mayor. The journey to this day began in November 3, 2015, when the citizens of Muscatine elected Diana Broderson as mayor. 54 percent of the voters chose to have their city led by this political newcomer, a woman with decades of experience working with Muscatine families, and a person who was not employed or supported by one of Muscatine’s leading industries as had been the pattern among previous members of the City Council.

Local reporting gave no indication that this election was controversial or any different from previous transitions of power. The Muscatine Journal reported, “Broderson said her first priority when taking office will be to get the community more involved. She said she wants to form committees for priorities.” Broderson herself was quoted as saying she wanted to, “make sure I get community input on that – not just me deciding what we should work on.”

The newspaper also reported that the outgoing Mayor Hopkins “didn’t appear too bothered by losing – he didn’t show as much grief as his supporters.” In fact, Hopkins called Broderson to wish her well.

Fast forward sixteen months, and we find the mayor and city council sitting in council chambers at 8:00 am on a Thursday morning holding an impeachment hearing.

The citizens of Muscatine had not filed a petition to urge the council take this action. The mayor was never arrested or convicted of any crime leading to a public call for her removal from office. If you do any research, you won’t find any evidence that this hearing was sought by anyone outside city hall. So it raises the question, why is this happening under these circumstances? If the mayor had political opponents, why aren’t they removing her the old-fashioned way, by running a candidate against her in November 2017? What about her leadership was such a threat to the well-being of the city that the council was forced to take such extraordinary measures and expense to impeach their mayor.

Impeachment proceedings in the U.S. at any level of government are an exceedingly rare occurrence, and if the charges were founded, you would think that the city council would have taken every effort to ensure that the proceedings were transparent, completely adhering to due process and equal protection laws, and upholding the integrity of our justice system.

But the hearing was held on a work day, during work hours, in the morning. Only after public pressure did the city reverse its original decision to not broadcast on cable access channel. Fewer than 100 people actually attended the hearing, a few wearing their Hawkeye gear, one woman was knitting, others were chatting about this year’s RAGBRAI route as they waited for the hearing to begin. Four armed police officers stood on guard in the chambers, in the hallway, and also upstairs in the gallery.

But city council chambers are not a courtroom. The prosecution and defense were set up on folding tables brought in to mimic the staging of a courtroom. A stenographer was hired, but due to the room’s acoustics, and the failure of the city to set up microphones on the folding tables, the stenographer could not hear what either the defense or prosecuting attorneys or witnesses were saying. Repeatedly the witnesses and attorneys were asked to repeat themselves. The stenographer’s station had to be moved from behind the dais so she could at be closer to the lawyers as they made their initial statements. For the first part of the hearing, attorneys and witnesses shuffled from various microphones on the council dais so they could be heard until city staff were able to set up microphones on each of the folding tables.

Since Mayor Broderson was being impeached, the Mayor Pro Tempore Bob Bynum presided over the hearing. Because City Attorney Matthew Brick was a witness in the trial, the city hired another attorney Doug Fulton to council the Mayor Pro tempore. Because city manager Gregg Mandsager was also to be a witness at the trial, they city hired retired Adjudicating Law Judge John Nahra to serve as prosecutor for the city’s case. The fact that the city attorney Brick drew up the impeachment charges and was also witnesses did not give any of the members on the council pause. And when the mayor pro tem voted with the other council members whether or not to admit evidence, none counseled him that perhaps he should recuse himself from both presiding and voting on the proceedings. Some members of the city council – the “jury” – repeatedly used their phones, laptops, and tablets during the testimony, a practice typically not permitted in criminal or civil court.

Mayor Broderson’s attorney Bill Sueppel Jr. did attempt to point out how the peculiar circumstances may be a violation of the mayor’s due process, and he filed a motion the previous day to remove the matter to District Court, citing the “Burke” decision in Lansing, Michigan. District Court, he argued, would allow both sides to bring in additional evidence and testimony. Sueppel argued it was a fairer venue, that it would take the burden off council to deliver the verdict, that District Court would have an independent judge, that it would be an expedited trial.

But Nahra argued that Lansing circumstances were substantially different. Mayor Pro Tempore Bynum’s attorney Fulton explained that these are “unusual” proceedings and that sometimes there are “holes in the law”. Sueppel explained to the council as well that he won’t call them as witnesses in today’s hearing, but he may have to if it proceeds to District Court. After more discussion, the city council, including Bynum, still voted four to three to hear the trial anyway, a trial that would continue over the next eleven hours before both sides finally agreed to adjourn until Saturday, April 1st.

[To be continued…this is the first part of a series to be continued throughout the week until the hearing resumes on April 1. The odd charges filed against Broderson are posted here.]