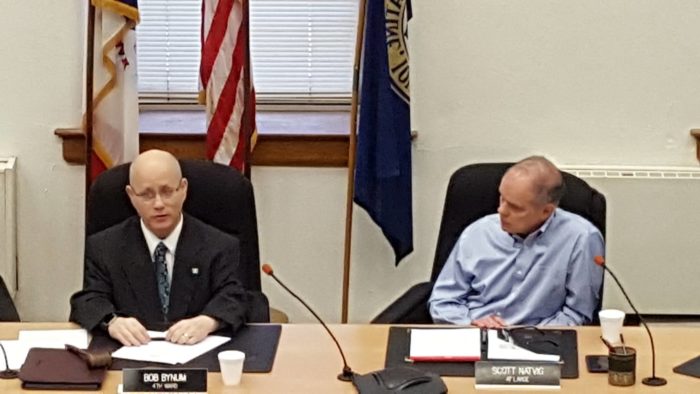 Follow-up to the March 26 post Exhibit Why? This is the second part of Tracy Leone's series on the Muscatine mayoral impeachment, to be continued throughout the week until the hearing resumes on April 1. -promoted by desmoinesdem

Despite Mayor Diana Broderson’s attorney Bill Sueppel's motion to remove the City’s impeachment case to District Court, and upon the advice of their prosecuting counsel John Nahra (who stood to gain from the next eleven billable hours of the day’s hearing), the Muscatine City Council voted to hold the impeachment trial as is – with the City Council acting as accusers, judge, and jury.

Sueppel objected that this was the first time he had seen this testimony. Neither, as is usually the case with depositions, was he allowed to depose the witnesses at that or any other time prior to today's trial. Nahra explained that there was nothing to worry about because Sueppel could cross examine the witnesses here and now. Notwithstanding Sueppel's objection, the city council/jury/judge/bunch of guys playing Law and Order voted and agreed to let Nahra submit the binders as evidence.

For the next eleven hours, witness after witness was sworn in by Mayor Pro Tempore and jury member Bob Bynum. After taking their seat at the witness station, which had been where the court recorder was seated until it was determined that she was unable to hear the attorney and moved nearer, the witnesses would be asked by Nahra if today they would agree with the testimonial as given in the earlier testimony given under police supervision.

One by one Nahra would ask the witnesses “Do you agree…?” with the testimony in the binders. One by one, the witnesses swore that, yes, indeed, what they had said earlier and what was in the binders was completely true. After this 30-second pseudo-questioning, Nahra thanked the witesses and took his seat. People in the audience, the mayor and her attorney, people viewing from home, everyone but Nahra and the witnesses, and whomever assembled the binders, was left completely in the dark about whatever evidence against the mayor was contained therein.

Sueppel had to either divine what to cross examine from the unspoken testimony, or work rapidly with his assistant to peruse through the tabbed binder to look for holes in their testimony.

Community Development Director Dave Gobin was on vacation and unable to appear in person to confirm his testimony, so the City Administrator set up a conference call station in front of Bynum, and interrupted Dave’s vacation to participate in this circus. Dave was asked by Bynum to hold up his right hand and swear to tell the whole truth. We were expected to imagine Gobin in his fishing vest holding up his right hand, and swear into the phone he held with his left hand, that he was going to tell the honest to god truth, and that he swore by everything in the binder he did not have access to at his hotel or condo or tent or whatever were his vacation lodgings. But I suppose that mattered little to Council member Tom Spread who typed into his laptop during Gobin’s testimony. He probably figured if that guy gets to be on vacation, then I get to catch up on my emails.