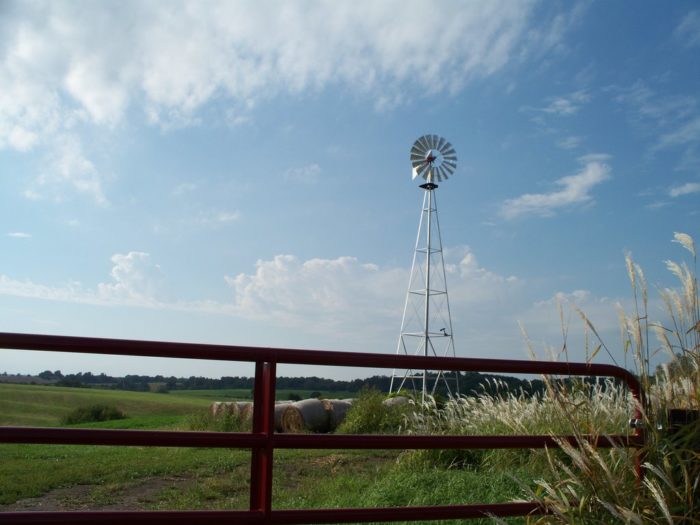 Thanks to Democratic activist Paul Deaton, “a low wage worker, husband, father and gardener trying to sustain a life in a turbulent world,” for cross-posting these ideas from his blog. -promoted by desmoinesdem

Progressives, farmers and environmentalists heard there is movement in the Iowa legislature to fund water quality and ears perked up — a natural impulse to interpret new events as supporting something we already believe or are working on, also known as confirmation bias.

56 percent of Iowans support increasing the state sales tax three-eighths of a cent to pay for water quality projects and outdoor recreation, according to a Selzer and Company poll reported by the Des Moines Register on Feb 12.

On March 14, State Representative Bobby Kaufmann (R-Wilton) introduced such a bill: the WISE (Water, Infrastructure and Soil for our Economy) bill, House File 597.

After a three year implementation the tax would generate $180 million to fund Iowa’s Natural Resources and Outdoor Recreation Trust Fund, which was created by a 2010 amendment to Iowa’s constitution. It sounds pretty good. However, we shouldn't let our confirmation bias help Republican efforts to tax the poor, cut the general fund, and support the failed Nutrient Reduction Strategy.

When Governor Terry Branstad created the Nutrient Reduction Strategy, in response to a federal requirement to address water quality, it was the least he could do. It was a way of tinkering around the edges of a water quality program, leveraging wide-spread concern about the need to act without changing the underlying structure of the system that creates excessive nitrate and phosphate loads in our water.

Branstad's approach sucked up media attention and political will while doing little to address the root cause of the water quality problem.

"I welcome any legislative effort regardless of party that looks to protect the environment," a progressive voter posted on Facebook. "While I agree that it is not fair that we have to take on the burden of trying to clean up after the farmers, I also know that they are a stubborn lot that hold great political power in Iowa. Therefore we need to be pragmatic and take whatever we can get while the Republicans are in charge."

A lot of people would agree with this sentiment.

It's clear solutions proposed in the Nutrient Reduction Strategy could work. They won't work until either the strategy is compulsory, or there is funding to support broad participation.

Despite Kaufmann's work on the bill there are issues with the WISE approach to water quality.

Sales tax is regressive, which means it would be applied uniformly to all situations, regardless of the payer. Some might argue that everyone uses water so why shouldn't everyone pay through sales tax? It is a straw man argument. A sales tax takes a larger percentage of income from low-income earners than from people causing this problem.

What's worse than the regressive nature of sales tax is the Republican position any new tax must be revenue neutral. That means cutting the state budget. Where will the legislature find an additional $180 million in budget cuts after a year with three successive revenue shortfalls?

"Kaufmann admits there (are) still some questions about how the bill would affect other state programs," Rob Swoboda reported in Wallaces Farmer. "But, he says, the only way the Republican-led legislature will pass a water-quality funding plan would be if the plan is revenue-neutral."

Proposed budget cuts should be defined before advocating for the WISE bill.

There is no need to hold the agricultural community harmless in the pursuit of clean water. In 2013, when developing the Iowa Fertilizer Plant (a.k.a. Orascom) in Wever, Governor Branstad said, "the plant would create 2,500 temporary construction jobs and 165 permanent jobs and save farmers $740 million annually by cutting the price of fertilizer." Whether or not there was a windfall in fertilizer savings farmers can afford to put skin in the water quality game.

"Where public money is needed (to fund water quality initiatives), consider an obvious source: the sale of farm fertilizer," former state senator David Osterberg wrote in a May 25, 2016 column in the Des Moines Register. "If an urban person buys fertilizer for the lawn, there is a sales tax on the purchase. Farmers are exempt from the normal sales tax on fertilizer and a lot of other things. There is no reason for this exemption. Put the sales tax on fertilizer, earmark it to water-quality strategies and you have, conservatively, about $130 million a year to work with."

While a majority of voters agree something must be done to improve water quality, political capital shouldn't be diverted to supporting failed Republican policies just because they sound good or appear to support what we all believe.