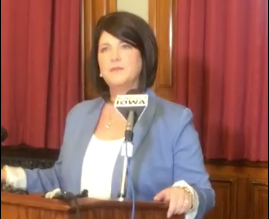 The largest labor union representing Iowa teachers and its Davenport affiliate filed a lawsuit yesterday challenging the constitutionality of House File 291, which eliminated almost all collective bargaining rights for teachers.

I enclose below the full text of the initial Polk County District Court filing. Scroll down to read comments Iowa State Education Association President Tammy Wawro delivered at a press conference, which you can watch here.

Like the lawsuit Iowa's AFSCME chapter filed in February, the new lawsuit targets the unequal treatment of two classes of workers under the revised Chapter 20, which governed collective bargaining here for more than four decades. "Public safety" workers will be able to keep bargaining over a larger range of subjects, while other public employees can negotiate only about a handful of subjects, primarily base pay. ISEA maintains that this division violates Article I, Section 6 of the state constitution, which stipulates, “All laws of a general nature shall have a uniform operation; the general assembly shall not grant to any citizen, or class of citizens, privileges or immunities, which, upon the same terms shall not equally belong to all citizens.”

In addition, the ISEA is challenging the law's two biggest union-busting provisions: a ban on automatic payroll deduction for union membership and political contributions, and procedures that will make it harder for public unions to stay certified. ISEA holds that the payroll deduction ban also violates the uniformity clause of Article I, Section 6, because such deductions will be allowed for other professional associations or organizations. In addition, the lawsuit charges that by creating "an undemocratic election system" for unions representing public workers, which "counts votes based on population instead of number of votes cast," the law violates the substantive due process guarantee of Article I, Section 9.

Attorney General Tom Miller is not defending the collective bargaining law, to "avoid any questions about a potential conflict." The state retained the Belin McCormick law firm to handle legal challenges. At the end of this post, I enclose the motion filed to dismiss ASFCME's lawsuit; the defense against ISEA's suit will make the same arguments.

Remarks by Tammy Wawro, president of the Iowa State Education Association, at a press conference on April 4:

The law, which was rushed through the legislature and passed with no input from those it targets, treats educators and their chosen representatives unequally and unfairly. For more than 40 years, collective bargaining served as an effective and efficient way to manage employee and employer working relationships and to determine appropriate terms and conditions of employment. But the changes wrought by HF 291 have now created two classes of public sector employees thereby violating Article I, Section 6 of the Iowa Constitution. The bill also sets up an undemocratic system for elections that has no basis in fair representation or electoral worth.

The Iowa Constitution is clear. Article I of the Iowa Constitution is labeled “Bill of Rights” and has 25 sections describing the rights of the citizens of Iowa in great detail. Section 6 of the constitution says: “All laws of a general nature shall have a uniform operation; the general assembly shall not grant to any citizen, or class of citizens, privileges or immunities, which, upon the same terms shall not equally belong to all citizens.” This section is commonly referred to as the Uniformity Clause.

A Dispatcher in some locals is able to bargain his or her health insurance including family coverage but our members are no longer able to do that. Why are the Dispatcher’s children more important than ours?

We do not begrudge our brothers and sisters in other unions for their bargaining rights. To the contrary. We wish for them to keep what they have and what we used to have. We are grateful they fought alongside us against this legislation. We simply wish to be equal and have all of our rights restored.

In effect, HF 291 prohibits an employer from making their own decisions about payroll deduction thereby removing local control and also creating an unequal distribution of organizations, programs and associations that are still able to partake in the system.

Finally, the new law establishes an irrational voter universe for recertification elections based on the total population of members of a bargaining unit in a school district. If a person is unable to vote, does not wish to vote, or is physically not available to vote this law automatically counts the absence of their vote as “NO”. No election in the United States is based on this formula and if it were, no candidate would ever be elected to office. Vote count based on population as opposed to those who actually turn out to vote is not democratic nor should it have a place in elections in the United States.

To be clear, under the new law, if any candidate running for office in the United States needed to reach this bar, no one would ever be elected to office, no public bond measure would ever be passed, or any other vote measure won. No social studies or government teacher in any public school in Iowa would tell you that is what democracy looks like.

The ISEA lawsuit seeks to strike down all three of these unfair and irrational provisions as violations of the Iowa Constitution. Our state constitution guarantees Iowans the right to fair and equal treatment under the law and HF 291 violates that basic promise.

We have filed in the Iowa District Court in Polk County against the state of Iowa and the Iowa Public Employment Relations Board and look forward to a swift resolution of our claims reinstating the constitutional rights of our members, local associations and ISEA.
Thank you.

Statement released by the Davenport Education Association on April 4:

Under collective bargaining, the DEA and the Davenport School District have enjoyed a cooperative and collaborative process which has instilled respect and good faith for both sides. We have always worked together to create an environment in our schools that encourages growth, mutual respect and teamwork while promoting and protecting the students in our care.

We wish to be abundantly clear that our standing in this lawsuit is intended to demonstrate this strong and cooperative relationship as one we wish to continue. We are representative of many locals in this position throughout the state.

HF 291 seeks to insert government control between the good standing we have with the Davenport School District. We are opposed to that insertion. We strongly support our school district and all of the work we have done together on behalf of our schools, student and employees.

Defendants' brief (motion for summary judgment) filed by private attorneys in response to a lawsuit brought by AFSCME Iowa Council 61 and four individuals adversely affected by the collective bargaining law: