Governor Kim Reynolds took acting Lieutenant Governor Adam Gregg on a whirlwind tour late last week to Osceola, Mason City, Cedar Rapids, Davenport, and Gregg's home town of Hawarden (Sioux County). Hundreds of people showed up for the Hawarden event; much smaller crowds turned out at the other venues. At each stop, Reynolds and Gregg praised former Governor Terry Branstad, and Reynolds repeated the four key goals she had laid out in her first speech as the state's top official.

Early signs point to a highly political rather than policy-oriented Reynolds administration. The new governor's top appointees are veterans of many Republican campaigns. Chief of staff Jake Ketzner worked on Branstad's campaign in 2010 and managed the governor's 2014 re-election bid; in between, he ran Representative Steve King's 2012 campaign against Christie Vilsack. Deputy chief of staff Tim Albrecht spent most of his career as a spin doctor for GOP candidates or elected officials before joining a Republican-oriented political communications firm in late 2013. You don't put guys like this in charge of your office if you're a "policy wonk" or interested in reaching out to constituencies that felt ignored during Branstad's tenure. These choices suggest that Reynolds plans to wage partisan warfare, day in and day out.

Over at Iowa Starting Line, Pat Rynard commented on how the Reynolds administration is already blurring the lines between official state events and 2018 campaign activities. Expect much more of this in the months to come.

Speaking of political games, progressive activists put up a parody site at ReynoldsGregg.org, pushing the message, "Kim Reynolds and Adam Gregg are Iowa's new team, but unfortunately they have the same old failed priorities" (see screen shot below). Rynard recalled that GOP operatives including Albrecht relentlessly mocked Jack Hatch's campaign for making the same mistake in 2014. At that time, quite a few of Iowa's political reporters wrote stories about Republicans grabbing HatchVernon.com and the @HatchVernon Twitter handle. So far, those media outlets have not publicized the same incompetence on the part of the Reynolds team.

Other passages worth noting: earlier this month, the Iowa Board of Regents chose Michael Richards as president and Patricia Cownie and president pro-tem, replacing Bruce Rastetter and Katie Mulholland, whose terms ended April 30. Rastetter opted not to seek reappointment to the board, tacitly acknowledging that Iowa Senate Democrats would never have allowed his confirmation. Mulholland sought another six-year term, but for reasons that remain unclear, Branstad passed her over. Regent Larry McKibben had expressed interest in the board presidency, but he gave up without a fight and formally nominated Richards. I didn't have a preference between McKibben and Richards; from my perspective, neither could possibly do worse in that job than Rastetter. This weekend, the Ditchwalk blog took an in-depth look at Richards: part 1 focused on his background and how he got the top job on the board, while part 2 looked at his early actions in the new position, speculating about whether Richards can fix the board's "colossal credibility problem" after years of administrative abuses by Rastetter.

In March, Sean Bagniewski won the election to succeed Tom Henderson, the long-serving chair of the Polk County Democrats. Bagniewski announced on May 23 that former Senator Tom Harkin gave his blessing to have Iowa's largest county Democratic organization hold an annual "Steak Fry" fundraiser. The inaugural event is scheduled for September 30 at Water Works Park in Des Moines; headliners have not yet been announced. Bagniewski joked, "One of my friends asked me how it felt to land the Steak Fry. It's like adopting a baby gorilla. Where do you put it? How're you going to feed it? How much is this thing going to cost?"

Final note: the New Leaders Council, "a nonpartisan program to recruit, train, and promote the next generation of progressive leaders," is holding a fundraiser in Des Moines on Thursday, June 1. Money raised will support the five-month training program for next year's New Leaders Council fellows. Local organizers hope to attract a more diverse class and are "doing more focused outreach to underrepresented communities" with a goal of having a 60 percent non-white and 55 percent female cohort of fellows for 2018. I enclose below more details about this week's event and the training program. 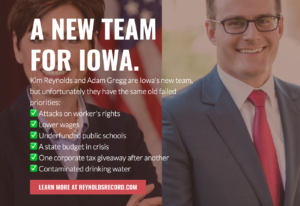 May 21 press release from the New Leaders Council of Des Moines:

New Leaders Council (NLC) is a nonpartisan program to recruit, train, and promote the next generation of progressive leaders. They have chapters in 48 cities, including Des Moines.

NLC Des Moines will celebrate another year of training with a fundraising event Thursday. The event, called Ready, Set, Engage! Empowering the Next Generation of Iowa Leaders, will take place at the Iowa State Bar Association (625 E. Court Ave.) from 5:30-8 p.m. on Thursday, June 1. It will showcase diverse leaders in the realm of political, business, and nonprofit leadership. NLC Alumnus and state Senator Nate Boulton will serve as MC, and speakers include Des Moines’ state Senator Janet Petersen; Mike Draper, owner of Raygun; and Alejandro Alfaro-Santiz, a progressive pastor at Trinity Las Americas and Wesley United Methodist Church.

The funds raised will benefit next year’s class of NLC fellows. Approximately 20 people are selected to be NLC fellows each year, participating in an intensive, five-month program that addresses such topics as public speaking, fundraising, and building coalitions. Because of fundraising efforts like the even June 1, the program is free for participants.

While the 2017 class of NLC fellows includes a diverse group, the organization aims to improve representation and equity. The importance of diversity in progressive leadership is a core focus of the national organization's mission, with goals of a cohort that is 60% non-white and 55% women. The Des Moines chapter seeks to diversify its candidate pool and selected participants by starting 2018 recruitment efforts earlier than in previous years, and doing more focused outreach to underrepresented communities.

Alejandro Alfaro-Santiz, a speaker for the June 1 event, supports the organization’s emphasis on diversity in leadership: “it is important to have diverse people in leadership positions because it helps people first recognize that we are not all the same, and that's a good thing, in fact that can be used as a strength to advance your cause. Second, seeing people similar to them [participating] motivates people to get involved.”

This year's fundraising and social event will be held at the Iowa State Bar Association, 625 E. Court Ave., from 5:30 p.m. to 8 p.m. Tickets are $25 and can by purchased at the following link: http://desmoines.newleaderscouncil.org/2017_fellows_event

If you are interested in becoming a sponsor for the organization, you can do so by donating at https://desmoines.nationbuilder.com/2017_sponsors_and_donors