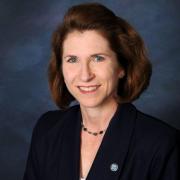 Sounding more like a Republican loyalist than a hard-nosed fiscal analyst, State Auditor Mary Mosiman told reporters this week that Iowa's budget for the year beginning July 1 is "stable" and "responsible."

Mosiman also asserted that Iowa has "practically eliminated using one-time revenue sources for ongoing expenditures," even though Governor Kim Reynolds recently confirmed the state will need to dip into reserve funds a second time to cover a third major revenue shortfall during the current fiscal year.

While speculating on why Iowa's revenues have fallen well below projections, Mosiman echoed excuses offered by leading Republican politicians, ignoring a new business tax break that has been a far more important factor.

Iowa's self-styled "Taxpayers Watchdog" may come to regret staking her credibility on the wisdom of GOP budget planning.

A ROSY VIEW OF A "STABLE" BUDGET

By any objective measure, our state budget has been on shaky ground during the past year. Yet Mosiman offered a positive spin at a June 26 press conference. Dar Danielson reported for Radio Iowa,

“Our budget is balanced, we are doing very well in adhering to sound budgeting principles — which is essential for government entities –the deviations that we have are minimal,” according to Mosiman. “We have practically eliminated using one-time revenue sources for ongoing expenditures. The multi-year accelerated financial commitments have expired. And we are doing a better job of using the best estimates available in the budget.”

The Des Moines Register's William Petroski quoted the auditor as saying, "This year's budget is stable, and it is responsible. The resources supporting Iowa's fiscal year 2018 final action budget are in line with appropriations."

The last time mid-year spending cuts were needed to balance the state's books (fiscal year 2010), Iowa was contending with the aftermath of the "Great Recession," which caused "the largest collapse in state revenues on record." This year, leaders needed to address budget shortfalls three times during a period of economic growth.

Mosiman implied that this is some new accomplishment: "resources supporting Iowa's fiscal year 2018 final action budget are in line with appropriations."

In fact, Iowa law caps spending from the state's general fund at 99 percent of projected revenues. In other words, appropriations match expected resources every year. The budget for fiscal year 2017 was no exception.

Although Mosiman talked up officials "doing a better job of using the best estimates available in the budget," leaders have repeatedly played catch-up over the past six months as reality collided with overly optimistic revenue projections.

Iowa's first mid-year budget cuts since 2010 weren't enough to stop the bleeding. In March, the Revenue Estimating Conference determined revenues would fall another $131 million short of expected levels. The administration tapped reserve funds to get the state through the fiscal year that ends June 30.

But a few weeks ago, the top tax analyst for the Legislative Services Agency announced that revenues for the first eleven months of fiscal year 2018 left the state another $97 million below projections. Reynolds insists no spending cuts are needed to accommodate the latest bad news. Instead, officials will "dip into a state economic emergency fund for $50 million."

Jon Muller, a former state revenue estimator, believes further downward revisions are likely during fiscal year 2018. If he is correct, Republican lawmakers and Reynolds will be forced to enact another round of painful mid-year spending cuts or take more money from the state's cash reserves in early 2018.

Those numbers didn't include a new sales tax break for manufacturers, which took effect last July. Governor Terry Branstad had tried to implement that policy through administrative rules, with GOP lawmakers' blessing. Not wanting to set a precedent for tax changes without legislative approval, statehouse Democrats settled for scaling back the break for manufacturers in a multifaceted tax bill.

Muller calculated in March that "the impact of the manufacturing Sales/Use tax exemption is much worse than forecast," probably around $94 million during the current fiscal year. (When lawmakers approved that break in 2016, the Legislative Services Agency estimated it would reduce state revenues during the first year by only around $21.3 million for the general fund and $4.3 million for the school infrastructure fund.)

Republican administration and legislative leaders have promoted other explanations for the revenue shortfalls, factors that lie outside the control of policy-makers.

The prime culprit is said to be a downturn in the agricultural sector. In his March commentary, Muller noted,

Deviation in farm income is a frequent and convenient scapegoat for what happens with Iowa General Fund revenues, but I have never found a serious correlation between the health of the state budget and the state’s farm economy. I do not see any evidence that changes my view today.

There are three primary reasons for this. First, farm income is a much smaller share of statewide personal income than it used to be. Though that relative strength started to stabilize after the 80s farm crisis. Next, farm spending in the economy is not nearly as erratic as net farm income. Lastly, farmers have ways of spreading profit over several years, and current data in Income tax returns data suggests tax payments from farmers have returned to some growth.

He said his department is looking into the leveling off of sales tax revenue.

"The one thing that is going on nationally as well as in Iowa (is) the online purchasing," [Roederer] said. "That’s having an impact on the sales tax, and the scope of that I’m not sure … we fully know what all those dynamics are."

Nationally, the National Conference of State Legislatures estimated that in 2012 the value of foregone sales taxes stemming from online sales was $23.3 billion.

But Robinson argued that issue was well-known to Iowa and should have been accounted for in its revenue projections.

"Generally, people were talking about … the competition from online sales," Robinson said. "Well, that didn’t start July 1. That’s been going on a long time."

On the sales and use tax side, the weakness is mainly in consumer purchases, which is caused in part by ripple effects of declining commodity prices and in part by consumer purchasing continuing to shift to out-of-state, online retailers, Reynolds said. She added that growing numbers of Iowans are going online to make purchases, which is causing sales tax collections to be stagnant, if not declining. [...]

Reynolds made no specific mention of a controversial tax law change benefiting manufacturers that was pushed through by Branstad. A state fiscal analyst has said the unexpected expense — the result of an expanded sales and use tax exemption on goods consumed in the manufacturing process, could cost the state $80 million more this year than projected.

This week, Mosiman followed the administration's talking points. From the Radio Iowa story:

“Gaining a better understanding of Iowa’s changing revenue environment will be one of our greatest challenges and opportunities in this coming year,” Mosiman says. [...]

From the Register's piece:

Mosiman suggested that while revenue forecast experts consider the impact of such factors as Iowa's farm economy on the state's budget, they also face a difficult task of attempting to gauge societal spending patterns, which have shifted sales away from brick and mortar stores that collect sales taxes to online retailers that do not always collect state sales taxes. In general, if an online business does not have a physical presence in a state, it is not required to collect sales tax for an internet-based sale to someone in that state.

As Robinson told Pfannenstiel, online shopping is not a new phenomenon. Why would it suddenly cause a major mismatch between Iowa sales tax projections and receipts, starting last August?

In contrast, the new break for manufacturers hit the scene in fiscal year 2017, just as Iowa's sales/use tax growth began to decline in "a break from the trend" since the last recession.

During Iowa's time of budget troubles in the late 1980s and early 1990s, Republican State Auditor Richard Johnson was willing to speak truth to power. Regrettably, Mosiman has so far acted as a loyal team player for the GOP.

P.S.- Mosiman cited the expiration of various "accelerating, multi-year financial commitments" as one reason the state budget will be stable in fiscal year 2018. The largest of those escalating commitments stemmed from the 2013 commercial property tax cut. From an analysis by the LSA in January 2016:

Don't assume that the total cost of that property tax cut will stay flat. Rather, as this area of state spending levels off, the burden on local budgets will increase. Muller explained in his review of the property tax cut's impact, "The future cost of that [valuation reductions for commercial property] will be borne by local governments (mostly cities, counties, and community colleges), by the citizens they serve in the form of reduced services, and/or by an increase in tax rates."

A couple updates since that piece I wrote in March, and there is no evidence I can point to that changes my outlook. First, I noted that employment had been growing, but the Labor Force had peaked, and was in a slow decline, recognizing it was too early to conclude a trend. Probably still to early to conclude a trend, but if there was one, it didn't break. Still slightly declining Labor Force. I also noted that when this happens, employment will eventually stop growing as well, and that has also happened. Third, I speculated that things might get better on the Use Tax front but not Sales Taxes, figuring manufacturers would just stop paying the tax in April 2016, even though the law didn't go into effect until July 1. Sure enough, Use Tax receipts have rebounded in the past quarter, but still barely positive on the year. Sales tax revenues have not improved. [...]

It seems perfectly sensible to use one-time money for ongoing expenditures when when the revenue shortfall is short-lived, a "rainy day." But that's not what's happening. Rain is a metaphor we use to describe the business cycle. It's more like we're standing in a cold shower with our clothes on, and can't manage to find a way to turn the water off because we broke the faucet, and we refuse to call a plumber. It is never going to stop raining without a law change. I just don't see how it can.