Thomas Heckroth joined the field of Democratic challengers to Representative Rod Blum in Iowa's first Congressional district yesterday, calling for policies that "start investing in people" to create an "economy that values work more than wealth."

Heckroth has been considering the race for several months. On his first day as a candidate, he stopped in Waterloo, Cedar Rapids, Dubuque, and Waverly, talking about his vision and criticizing Blum's votes for the Republican health care bill and for rolling back key financial reforms in the law known as Dodd-Frank.

Before Heckroth launched his website and released an announcement video, Iowa political reporters heard he was running for Congress from an Abby Finkenauer press release, which portrayed her newest primary rival as not Iowan enough.

Here's the July 10 statement from Finkenauer's campaign, which broke the news that Heckroth had filed paperwork with the Federal Election Commission:

Dubuque, IA – This morning, Thomas Heckroth filed with the FEC as a candidate in Iowa’s First Congressional District.

“We welcome Thomas Heckroth to the race and back to Iowa after he's been living in New York and D.C. for the past decade. We look forward to the important discussion of ways to improve the lives of the people living in Iowa’s First,” said campaign manager Joe Farrell. “As a second term State Representative as well as ranking member of Government Oversight, Abby Finkenauer has been focusing on looking out for and helping working families here in Iowa. She was born in Iowa, raised in Iowa, and chose to give back to her community here in Iowa. We respect Mr. Heckroth’s passion for the issues, but the working men and women of Iowa’s First need a leader who understands the issues they care about on a personal level, not from east coast talking points. There is too much at stake in 2018 and Iowans do not have time to wait for someone to catch up on the challenges that Iowa’s families are facing.”

Finkenauer was born and raised in rural Dubuque County, where her grandfather was a lieutenant with the Dubuque fire department, her father a union pipefitter welder and her mother an employee with the Dubuque Community Schools. Finkenauer is part of the first generation in her family to graduate from college, earning her degree from Drake University. She has worked for the Community Foundation of Greater Dubuque, where she helped invest in communities to help them grow, and was the state director for Make It Work, an organization dedicated to creating equal pay in the workplace. In 2014, she was elected to represent the city of Dubuque in the Iowa House, where she earned a reputation for standing up for working families and women. So far, Finkenauer has earned the endorsements of the Building and Construction Trades Council of Dubuque, the United Association of East Central Iowa Local 125, and EMILY's List.

So many things are wrong with this picture.

Living outside the state of Iowa is not a mental defect.

The challenges facing Iowa families are not substantially different from those affecting working people across the country.

Finkenauer supposedly values public service but spins Heckroth's past work for Senator Tom Harkin and the U.S. Department of Labor as inferior to her way of "looking out for and helping working families here in Iowa." 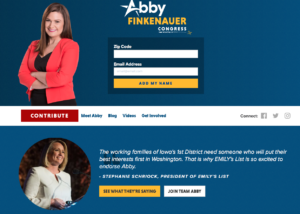 I expect the party of Donald Trump to play on prejudices and depict certain people as not authentically Iowan. Republicans have taken it a step further in many statehouse races, bashing Democratic lawmakers as too immersed in "Des Moines" concerns and out of touch with their constituents.

I expect better from my own party, especially since one of our most successful political leaders, Tom Vilsack, was born, raised, and educated in the east.

Finkenauer's not the first Iowa Democrat to play this nativist card, though. Four years ago, the state party used similarly stupid rhetoric against David Young, who was then a candidate for U.S. Senate.

Soon after receiving the news release, I sent the following questions to Finkenauer's campaign manager:

1. I lived outside Iowa for 15 years before moving back. Is it your contention that living outside the state makes someone stop caring about Iowans on a personal level?

2. Does living outside the state make a person lose all understanding of the needs of Iowans or the challenges they face? Does that apply to everyone who has worked for Senator Tom Harkin, for the U.S. Department of Labor or for some other federal government agency?

3. What about someone who lived outside the state for military service? Could that person retain some connection to what Iowans have been going through?

4. Are the challenges facing working Iowa families so different from those facing working Americans elsewhere that a person can't possibly understand them without living in this state continuously?

5. You refer to "east coast talking points." Are your campaign's talking points substantially different from those Democratic candidates are using in Congressional races all over this country? If so, how?

Protip: don't blast out a smear if you're not willing to defend your statements. This wasn't some off-the-cuff comment or response to an unscripted question. Finkenauer and her strategists clearly planned this line of attack, hoping to wrongfoot Heckroth before he could get a positive message out about his campaign.

Speaking by phone on July 11, Heckroth told me,

I'm a sixth-generation Iowan. I was born here, I was raised here, went to school here. My roots in Iowa run extremely deep, and especially in this district. My family goes back nearly 200 years in this district, down in Tama County. So I think that's about all that's necessary to say.

I didn't endorse a candidate in the hard-fought Democratic primaries to represent IA-01 in 2014 or 2016, and I probably won't endorse anyone in the current field before next June. Drawing contrasts is fair game in a competitive primary, especially if the contenders disagree on public policy or now hold views in conflict with their political records.

However, Democrats should avoid pitting people who have always lived in Iowa against those who are newer to our state, or who left for a while and moved back. We're the inclusive party.

In addition to Finkenauer and Heckroth, Courtney Rowe is seeking the Democratic nomination in IA-01. George Ramsey III, a former military recruiter and community activist in Cedar Rapids, filed FEC paperwork last month and is expected to formally announce his campaign here in the late summer or early fall.

Others who may enter the race include State Senator Jeff Danielson and Linn County Supervisor Stacey Walker.

Any relevant comments are welcome in this thread. This district is probably the Democrats' best opportunity to pick up a U.S. House seat in Iowa. Its 20 counties contain 160,513 active registered Democrats, 142,897 Republicans, and 187,783 no-party voters, according to the latest figures from the Iowa Secretary of State’s office. No one should expect an easy win: there was a huge swing toward Trump and down-ballot Republicans here in 2016, and Blum outperformed the top of his ticket by about 5 points.

UPDATE: Commenting on this post via Facebook, Linn County Supervisor Brent Oleson (who had been considering this race earlier in the year) said he plans to support Heckroth.

Thomas Heckroth is a sixth-generation Iowan who has advocated for workers and championed opportunity for all throughout his career.

Thomas grew up in Waverly — the son of a small business owner and hospital chaplain.

He played little league down at the AMVETS fields, delivered the Waterloo-Cedar Falls Courier, and was confirmed at St. Mary’s Catholic Church. After graduating from Waverly-Shell Rock, he went to the University of Iowa as a walk-on to the Hawkeye baseball team. He earned his degree, paying for it with student loans and summers as a letter carrier.

Driven by the desire to serve others and his community, he took an entry level job working for former U.S. Senator Tom Harkin. Under his leadership, Thomas focused on issues central to Iowa’s communities and future success: agriculture, education, and labor policy. He later joined the Obama Administration’s Department of Labor, holding corporations and trading partners accountable to protect workers’ rights and level the playing field for Iowans and American workers.

Following government service, his commitment to justice continued. After earning his MBA, Thomas went to work for a clothing manufacturer as the Director of Sustainable Manufacturing and Sourcing. There he enforced fair labor and environmental standards at home and around the world, to show that profit doesn’t have to come at the expense of people and the environment.

Today, Thomas and his wife, Naomi, live in Cedar Falls with their dog Waverly.

As someone who has dedicated my career to expanding economic opportunity, improving labor standards, and showing that economic profit does not need to be at the expense of hardworking people, I’m running for Congress because we need an economy that values work more than wealth.

I learned from an early age the importance of our shared values as Iowans. I understand that Iowans expect to be treated equally, dealt with honestly, and given a fair shot at success.

But, Washington politicians and special interests are rewriting the rules to favor billionaires and corporations instead of hardworking families in Iowa’s 1st Congressional District.

My experience working for Iowans and citizens across the country has made one thing very clear: Iowans in the 1st District are working harder but not getting ahead because we aren’t making the needed investments that spur innovation, growth, and higher paying jobs. It’s time we start investing in people because we should own our future. It’s time to rebuild a secure middle class, and help us regain our faith in the future.