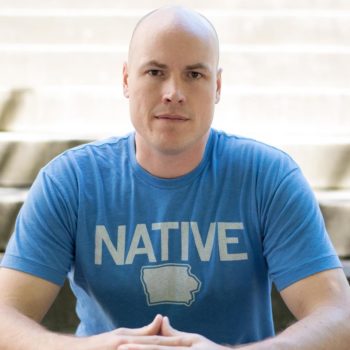 J.D. Scholten made his Congressional bid official yesterday, promising to stand up for ordinary Iowans and oppose the "divisive politics" that has made Representative Steve King famous across the country. Within an hour of the announcement, King's previous challenger Kim Weaver endorsed Scholten, one of several Democrats thinking about running in Iowa's fourth district.

Scholten's campaign is on the web here, as well as on Facebook and Twitter. From his July 25 press release:

I’m running for Congress because the 4th District deserves someone who truly represents the people of this district. Like most Americans, I am sick and tired of how divisive politics in this country has become, and how divorced it is from people’s lives. I was raised to believe that hard work, civility, and community are the values we should all aspire to, and I’m committed to bringing the same values and a new energy to this campaign. The 4th needs a voice that cares more about building our district’s future than it does about dividing us apart.

It’s going to take a unified effort to defeat Steve King and restore the voice of the people — our government is supposed to work for the people that live in this district, not for special interests and the privileged elite. I want to put Iowa values back at the center of public service, create new opportunities for Iowa’s middle class, and ensure that Iowans never again need to worry about healthcare as a barrier to living free, productive, and successful lives.

I look forward to being on the campaign trail everyday, meeting voters, listening to their concerns, and earning their support.

Weaver told me last week that she was leaning toward one of three Democrats thinking about running for Congress. Yesterday, she publicized her choice in an e-mail blast. Excerpts:

As I’ve said many times before, this was never about me, it was about beating Steve King. I’m still committed to doing all that I can to see that happen, and I’m excited to say we have a new candidate stepping up to the plate in J.D. Scholten! I met with J.D. recently and was extremely impressed with his energy, his passion, his progressive values, and his commitment to providing real representation to the people of this district.

That’s why today, I’m endorsing Democrat J.D. Scholten for Congress in the race against Steve King, and why I’m asking you to join me in supporting him in this effort.

Weaver can only give $2,000 of her unspent campaign funds directly to a candidate before the 2018 primary and another $2,000 to the Democratic nominee in IA-04 for the general election campaign. She may be able to help Scholten raise much more than that through her large supporter list.

Weaver's e-mail and the Act Blue page for the "Scholten4Iowa Kickoff" included a short video in which Scholten (wearing an Iowa State baseball t-shirt) said, "I'm running to help build an economy that benefits hard-working, middle-class Iowans, and a health care system that makes sense for the way we live our lives in this district, and a return to decency and integrity in our politics."

Here's the full bio from the "Meet JD" page of Scholten's campaign website:

Iowa Values define J.D. Scholten. All his life, as a teammate and a professional, he’s been surrounded by people who put others first. He’s played baseball in 7 countries, and his legal career has taken him to Minneapolis and Seattle. But who he is never changed: an Iowan, a community member, and a teammate with energy, a strong work ethic, and integrity. His family raised him to believe that hard work, civility, and community are the values we should all aspire to, and he is committed to living those values through his campaign to beat Steve King.

J.D., a 5th generation Iowan, was born March 4, 1980, at Mary Greeley Hospital in Ames. At 10 lbs. 2 oz., he was already standing tall. At 3, he moved with his family from the town of Nevada to Sioux City, where he grew up and first played baseball. One grandfather sold feed and seed to local farmers. The other was a farmer, while Grandma Fern—who he calls his inspiration—was a local elementary school teacher. J.D.’s father coached college baseball and his mother worked in public health, looking out for other mothers and their families.

As a student-athlete at East High School, J.D. earned 6 varsity letters and 3 All-State honorable mentions in basketball and baseball while graduating with honors. He went on to attend Morningside College, where he continued to emphasize both academics and athletics, making the Dean’s List and earning first-team academic all-conference. He later graduated from the University of Nebraska, where he led the College World Series baseball team in ERA, all while maintaining his academic all-conference status.

After college, J.D. pursued a professional baseball career, playing in Canada for the Saskatoon Legends, for his hometown Sioux City Explorers over the course of 4 seasons, and in Europe (Belgium, Germany and France). In 2013, J.D. had the honor of pitching with the UCLA Alumni baseball team for 5 games during their tour of Cuba; including giving up a single to current major leaguer Yasmany Tomas. Though the Majors remained elusive, he kept playing for the love of the game and for the love of supporting his teams. All told, he’s played baseball professionally in 7 countries, and with teammates from 6 continents (the invitation is open to anyone from Antarctica).

Between baseball seasons, J.D. began a career as a litigation paralegal, specializing in eDiscovery, Intellectual Property law and trials—a career that taught him the ins-and-outs of the law, good governance, and how to fight for people’s rights. He was proud to support the asylum case of a Cameroonian man tortured by his own government, and to help a Minnesota company protect its Intellectual Property rights against a giant Canadian corporation.

Though a first-time candidate for office, J.D. is a lifelong Democrat who in October of 2002 took a 20 hour one-way bus ride to protest the Iraq war and has volunteered on local, state and national campaigns. He is still an avid sports fan, loves to play cards, enjoys black coffee, and Casey’s pizza. He lives in Sioux City, having bought the family home. At 6 feet 6 inches tall, J.D. is truly “Standing Tall for All!”

In a recent interview with Pat Rynard, Scholten explained why his athletic background will be an asset to his campaign.

“Sports, especially baseball, is a bridge,” he said. “It gives me something in common with different generations and people of different backgrounds … We’re all supposed to be on the same team – the United States of America – and our team isn’t what it used to be. But I am an optimist and I believe that we Democrats are at our best when we advance the civic values that our country was founded on: civil rights, equality, and opportunity. At the very least, maybe someone who won’t vote for me can still have a constructive conversation with me.”

While he has some recognition in Sioux City from his baseball days, he’s also got personal stories that can connect him with many communities throughout the 4th District.

“I am a product of this entire district,” he noted. “My dad is from Larchwood, my mother is from a farm outside of Lake Mills. They met in Mason City when they were high school teachers. They moved to Nevada and I was born in Mary Greeley hospital in Ames while my dad was a Volunteer Assistant Baseball coach at Iowa State. We moved to Sioux City when he got the head coaching job at Morningside College. If you look at the map of the 4th District, I have roots throughout the district. Additionally, through baseball or basketball, I’ve had teammates from virtually this entire district.”

Leann Jacobsen may also join the field of Democratic challengers to King.

According to the latest figures from the Iowa Secretary of State’s office, the 39 counties in IA-04 contain 119,151 active registered Democrats, 191,512 Republicans, and 172,780 no-party voters. Donald Trump carried the district by a 60.9 percent to 33.5 percent margin, while King received 61.2 percent of the vote against Weaver.