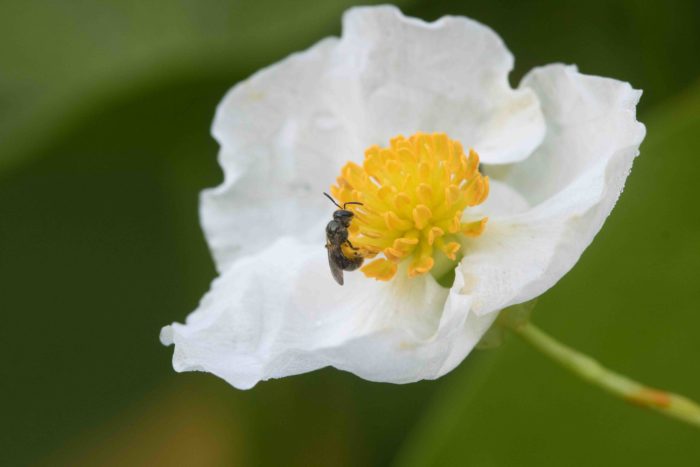 Sharing Eileen Miller's photographs is always a treat, especially when she has captured wildflowers I've never seen. Common arrowhead, also known as broad-leaf arrowhead or duckroot, can be found across most of the U.S. and Canada.

Of the more than 150 native plants featured for Iowa wildflower Wednesday since 2012, only a few species have separate male and female flowers: bur cucumber, early meadow rue, and purple meadow rue. Thanks to Eileen, we can add arrowhead to that short list today. She wrote all of the text below.

Common Arrowhead (Sagittaria latifolia) is a native, perennial, emergent aquatic plant. It grows in marshes and other shallow waters as well as when stranded on muddy banks. The leaves of these plants are shaped like arrowheads. The plants growing in shallow waters tend to develop narrow leaves, while those growing in muddy areas develop wider leaves. (see photos)

Most plants are monoecious, the male (staminate) and female (pistillate) flowers growing on the same plant. However, it's not uncommon to find dioecious plants in which the male and female flowers are found on separate plants. The distinctively attractive flowers may be over an inch wide. Each has three white petals and three sepals. Male flowers have a cluster of yellow stamens in the center. Female flowers form a bur-like mass of pistils in their center.

The developing fruits, consisting of a cluster of small, dry, indehiscent fruits called achenes, may be up to 3/4 inch across. As the fruits mature they change from green to brown in color. The seeds are eaten by ducks, herons and other waterfowl.

The roots of Arrowhead develop fleshy tubers similar to potatoes. These are food for beavers and muskrats. Native Americans collected these tubers and cooked them like potatoes. They also made a tuber tea to aid with digestion, and made a poultice of the tubers and leaves to help heal wounds and sores.

Arrowhead growing along a muddy bank of the North Raccoon River in Hobbs Conservation Area in Carroll County. In the background is an old railroad bridge over the river.

Note the narrow leaves of Arrowhead growing submerged in a marshy area at the Lake View Game Preserve in Sac County.

Showy male flowers of Arrowhead, with a cluster of pollen bearing stamens in the center.

Female Arrowhead flowers with a bur-like cluster of pistils in the center. A Halictid bee on one of the flowers, is possibly sipping nectar.

Developing fruit of Arrowhead, consisting of cluster of achenes (dry, dehiscent fruits). The cluster will turn brown at maturity.