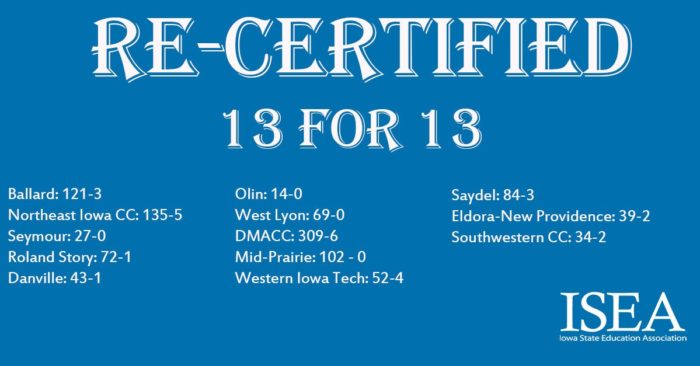 In a blatant Republican attempt at union-busting, the new law requires recertification elections before every new contract, which for most public unions would occur every two or three years. To stay certified, the union must be approved by a "majority of the public employees in the bargaining unit," not the majority of those casting ballots.

Of the 1,291 Iowans eligible to vote in this round of recertification elections, 1,101 voted to keep the bargaining unit, 27 voted against, and 147 did not cast ballots. Results for each bargaining unit are in a table at the end of this post.

Iowa State Education Association President Tammy Wawro called the recertification process "an arbitrary and punitive test" of public-sector unions' strength and support. Noting that "anyone who failed to participate was automatically counted as a 'no,'" Wawro added that the lawmakers who passed this legislation would not have been elected under similar rules. Scroll down to read her comments in full.

The state's largest teachers' union is seeking to overturn the new collective bargaining law, on the grounds that three important provisions violate the Iowa Constitution. That lawsuit claims the "undemocratic election system" for unions representing public workers, which "counts votes based on population instead of number of votes cast," violates the substantive due process guarantee of Article I, Section 9.

Another 483 public union bargaining units will hold recertification votes in October, the Des Moines Register's Brianne Pfannenstiel reported today. The Public Employment Relations Board has hired an outside vendor to conduct voting by phone and online, rather than by mailed-in paper ballots, as for this month's elections.

"Earlier this year, Republicans in the Iowa legislature sought to dismantle Iowa’s public employee unions by enacting an arbitrary and punitive test of our strength and support across the state. The law requires public sector employees to hold recertification elections in September for contracts that expire next summer. All 13 local associations in the September window are ISEA affiliates. All 13 won recertification retaining ISEA as the bargaining agent.

It is important to know that Iowa legislators set an unreasonable standard for these elections requiring a 50 percent plus 1 majority of all employees covered by the bargaining unit regardless of their union membership. In addition anyone who failed to participate was automatically counted as a “no”. If this standard were applied to the very legislators who passed this legislation they would never have been elected.

Despite these punitive and arbitrary obstacles, ISEA worked diligently to communicate with our members and school district employees on the importance of the recertification elections and the adverse consequences of failure. Employees, regardless of their union membership, understood what was at stake and voted to retain the rights they are entitled to receive.

We are extremely proud of our members and all of the public employees who understand what was at stake in this election and voted in the best interest of their profession, their students and their communities.”