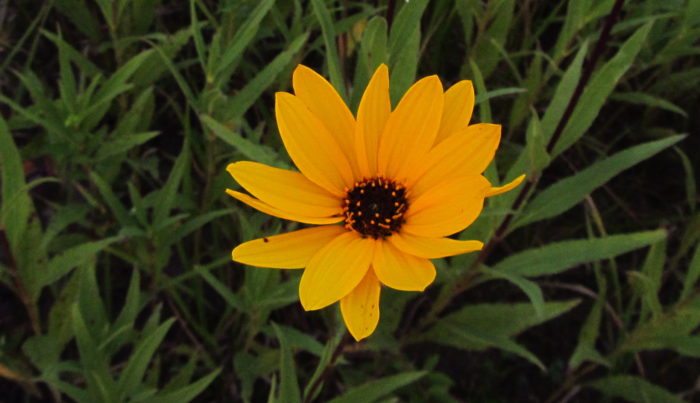 Some native plants are unmistakable, but nailing down the ID on today's wildflowers has been a challenge. When I first photographed a large colony of these plants on Mike Delaney's restored prairie in Dallas County, I assumed they were sawtooth sunflowers (Helianthus grosseserratus) because of the serrated leaves. However, John Pearson of the Iowa Department of Natural Resources commented in the Iowa Wildflower Report Facebook group, "This may be Prairie Sunflower (Helianthus pauciflorus), note reddish disc flowers. The long, leafless upper stems, however, remind me of Western Sunflower (H. occidentalis)." Leland Searles, another expert on native plants, mentioned that "sunflowers can be confusing."

I ruled out western sunflower for a couple of reasons. Mike collected the seed that spawned this colony at Tipton Prairie, a never-plowed patch of land in Greene County in the northwestern quadrant of Iowa. But western sunflower (sometimes called fewleaf sunflower) is primarily found in the eastern part of the state. In addition, several sources confirm the central disk florets on western sunflower flowerheads are yellow. Most of the flowerheads on these plants had reddish centers, which is typical for prairie sunflowers.

So, I'm calling these prairie sunflowers. Sometimes known as stiff sunflowers, Helianthus pauciflorus plants are native to most of the U.S. and Canada. I haven't seen them anywhere other than on Mike's land. Next year I hope to visit Tipton Prairie in the late summer or early fall, when they would be blooming. UPDATE: After I published this post, Mike told me he didn't find any of these at Tipton Prairie this year, but he did find them in the "Rippey strip," a narrow patch of native prairie several miles long next to the 144 Diagonal road near Rippey in Greene County. He believes he must have collected the original seed from the Rippey area.

The leaves have "a rather rough texture because of scattered short stiff hairs and fine bumps on the surface." They can have smooth edges but usually are serrated. Stems are "more reddish in very sunny spots," like this area of Mike Delaney's prairie. If the plants grow in partial sun, the stems "are usually green with some reddish tinges." A couple of shots of the stems and leaves: 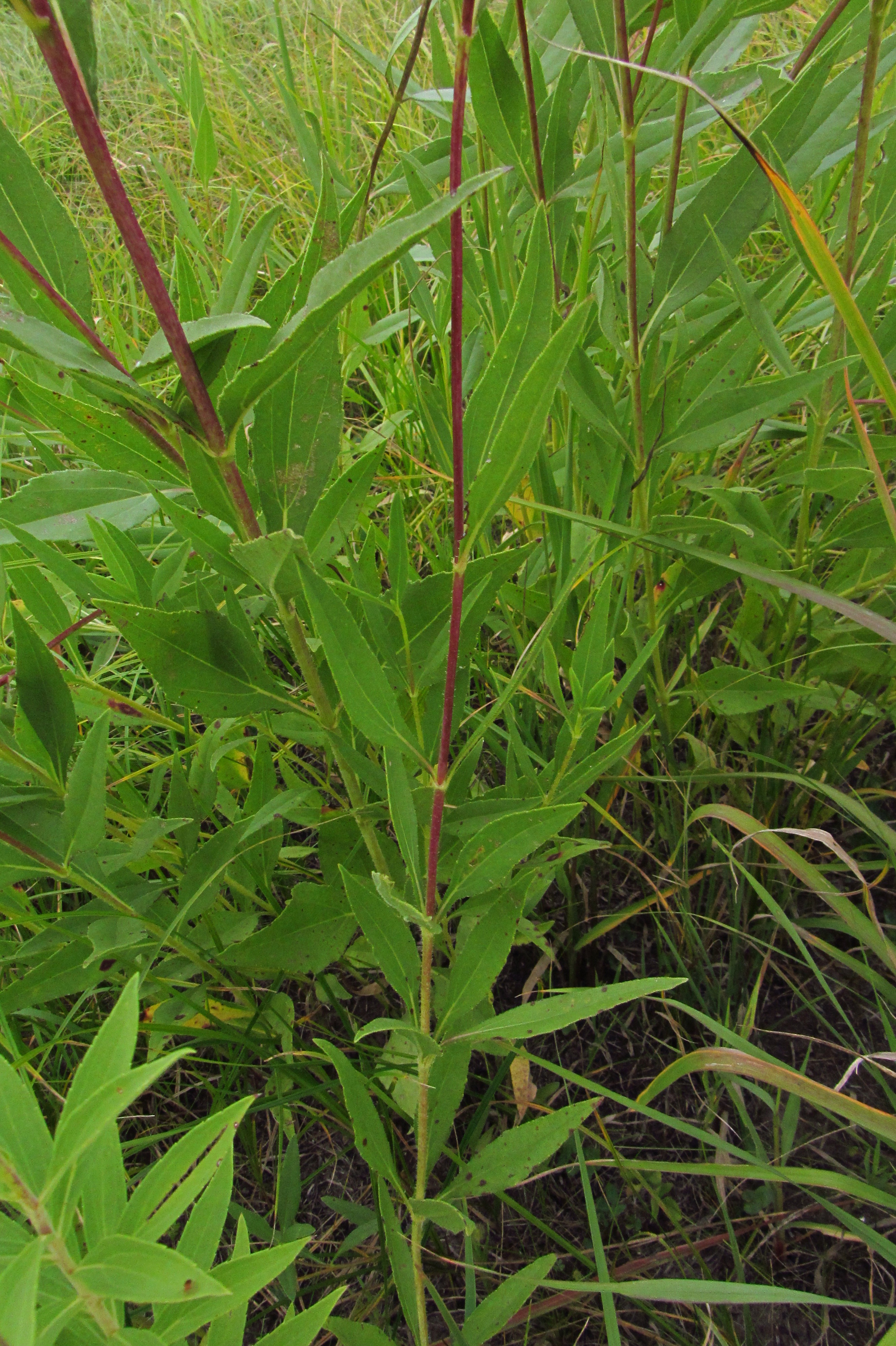 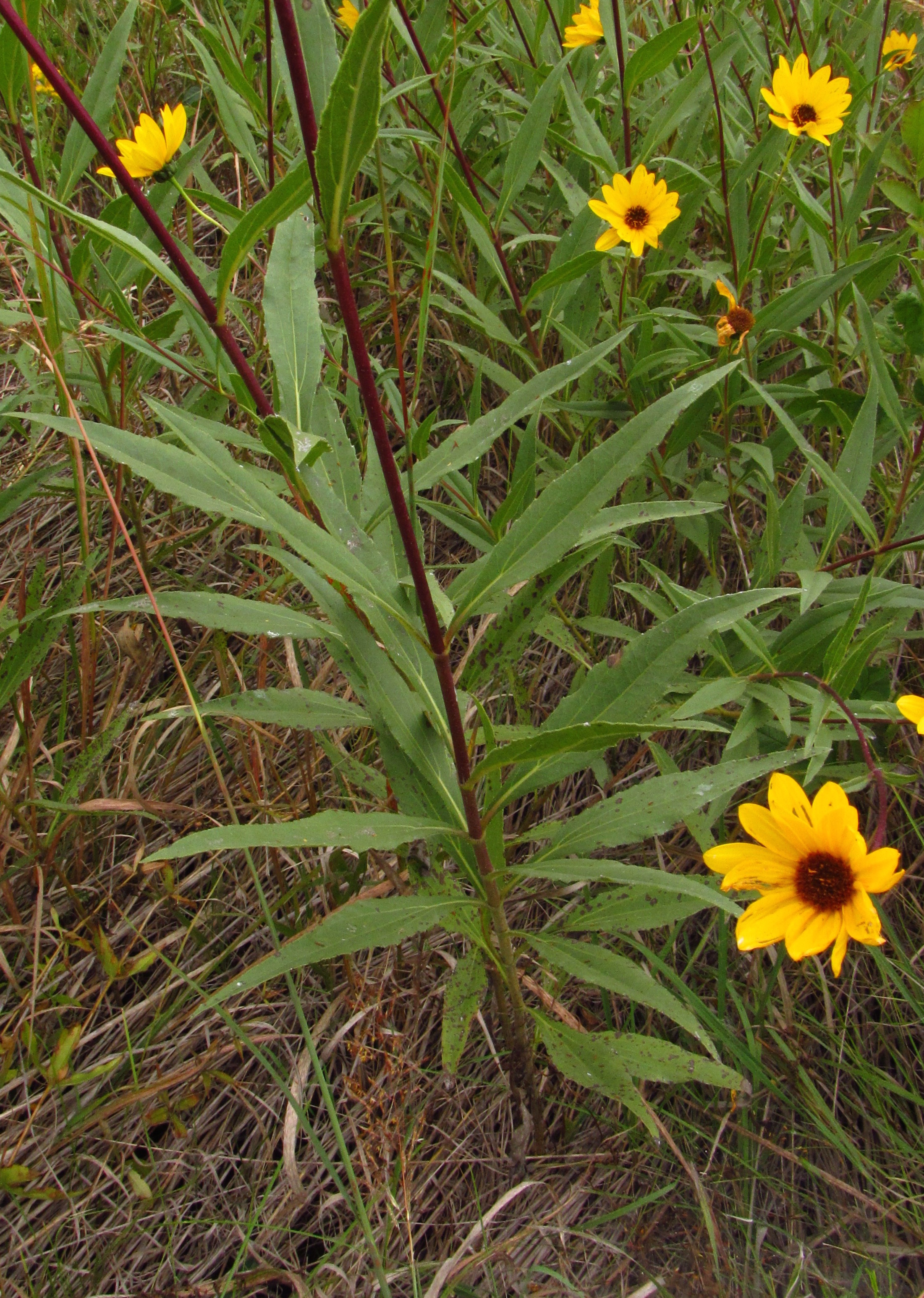 The bracts at the base of each flowerhead "are triangular in shape and appressed together in 2-3 overlapping series." You can see them on the flowerheads just starting to open in this picture. 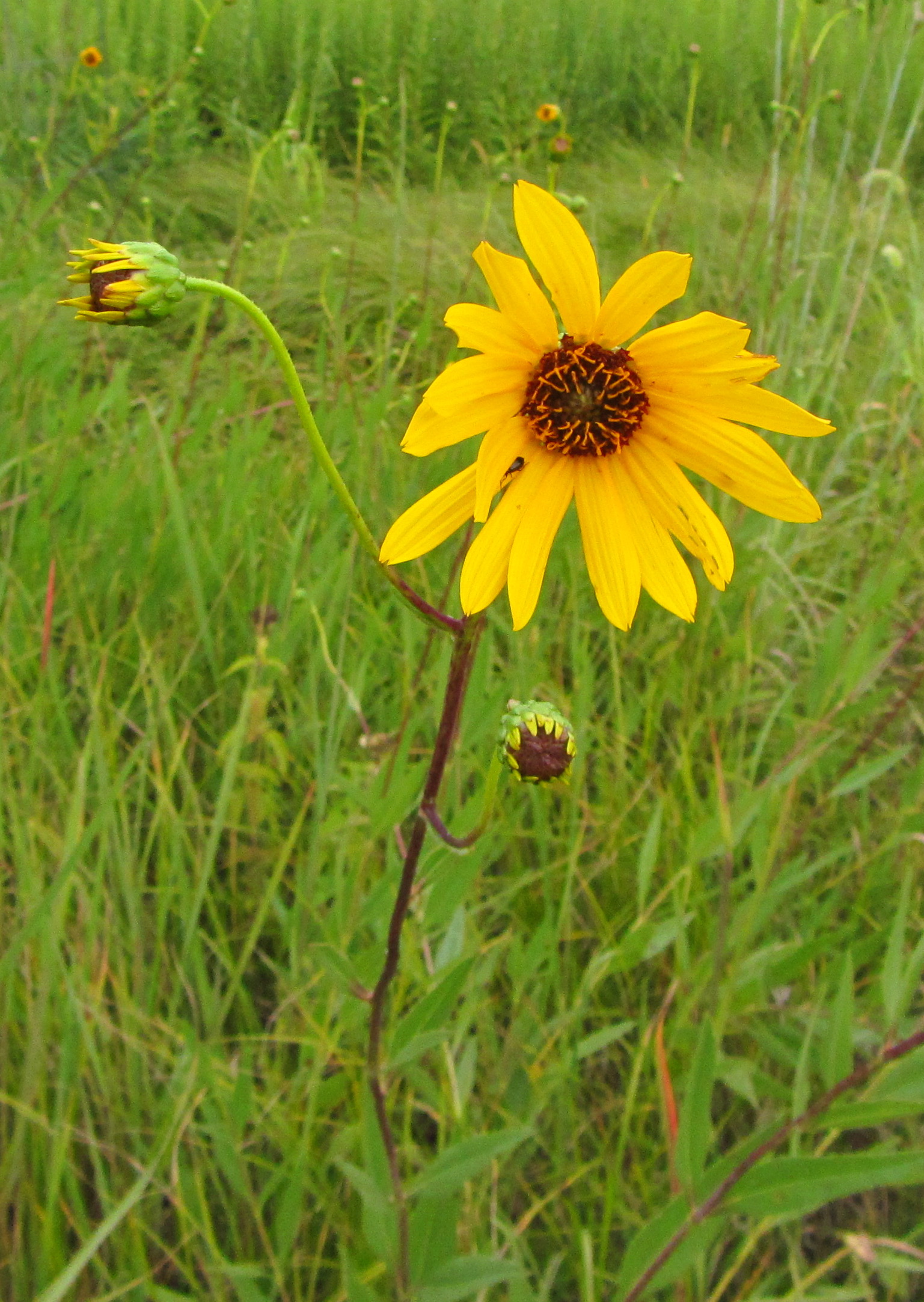 Prairie sunflowers can be six feet tall, but some of them are much smaller than that. 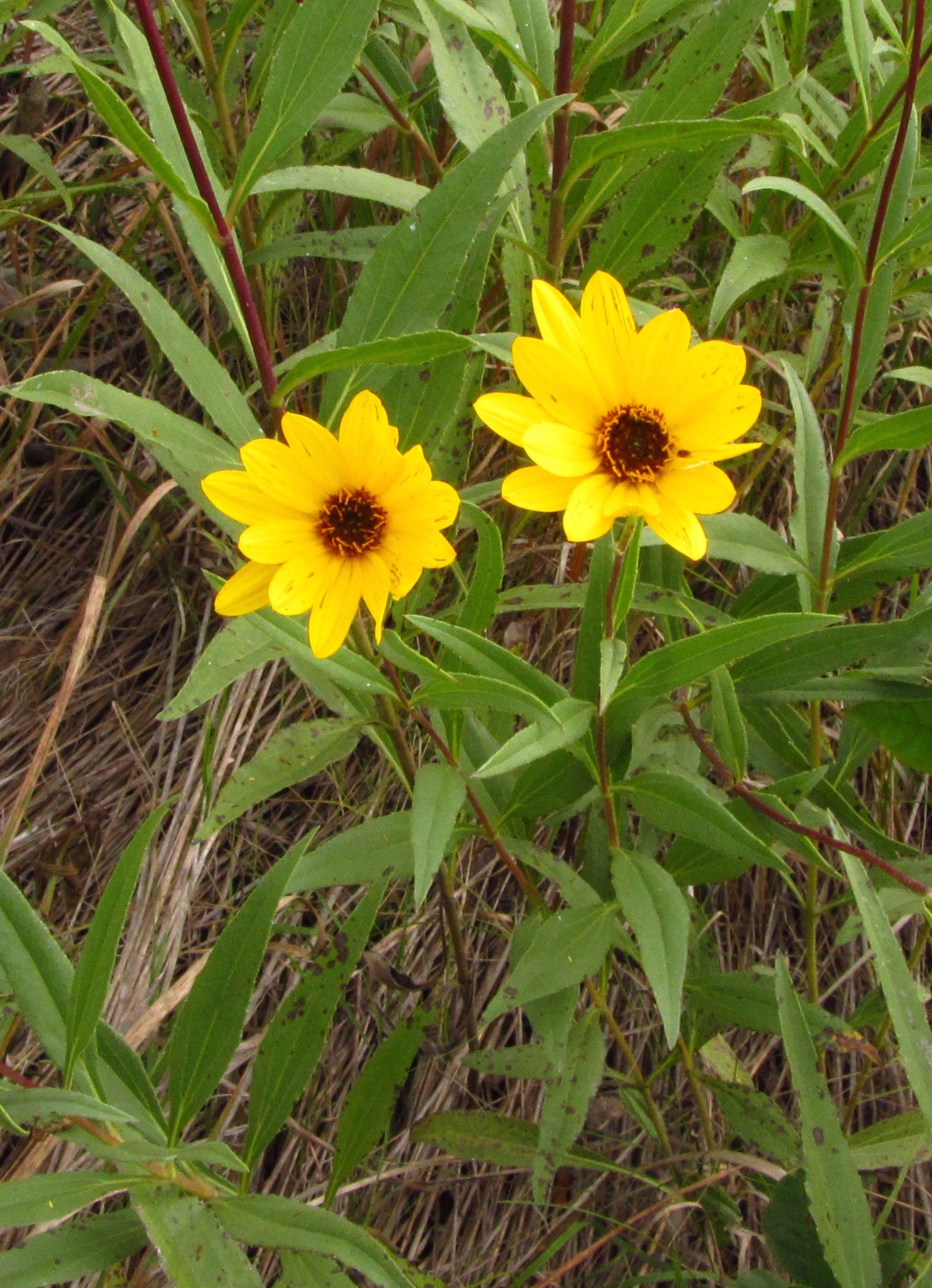 I couldn't capture the whole colony in one picture, but this gives you an idea of how many sunflowers were blooming in early September, as well as the variance in height. 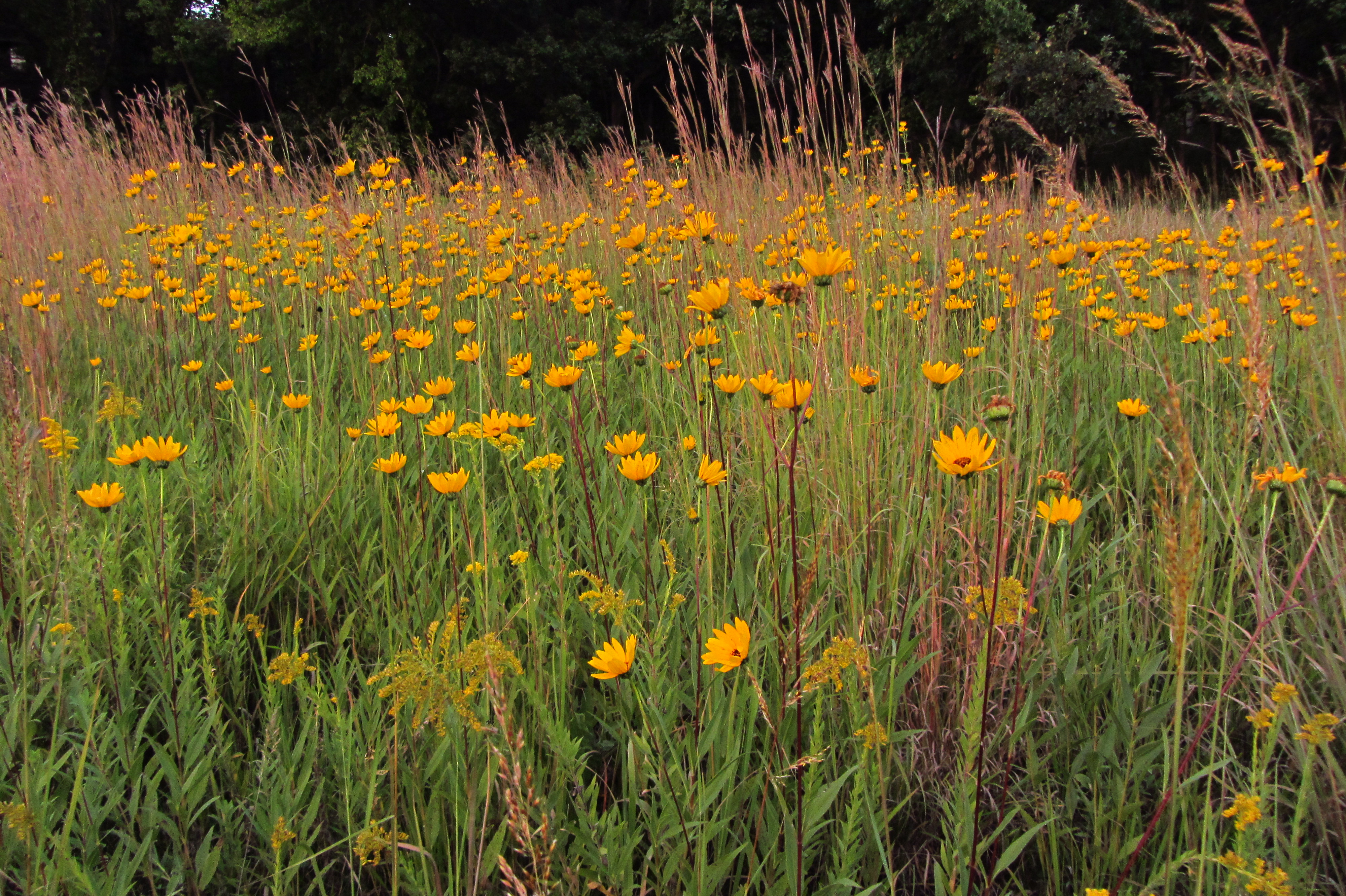 Closer look at one flowerhead: 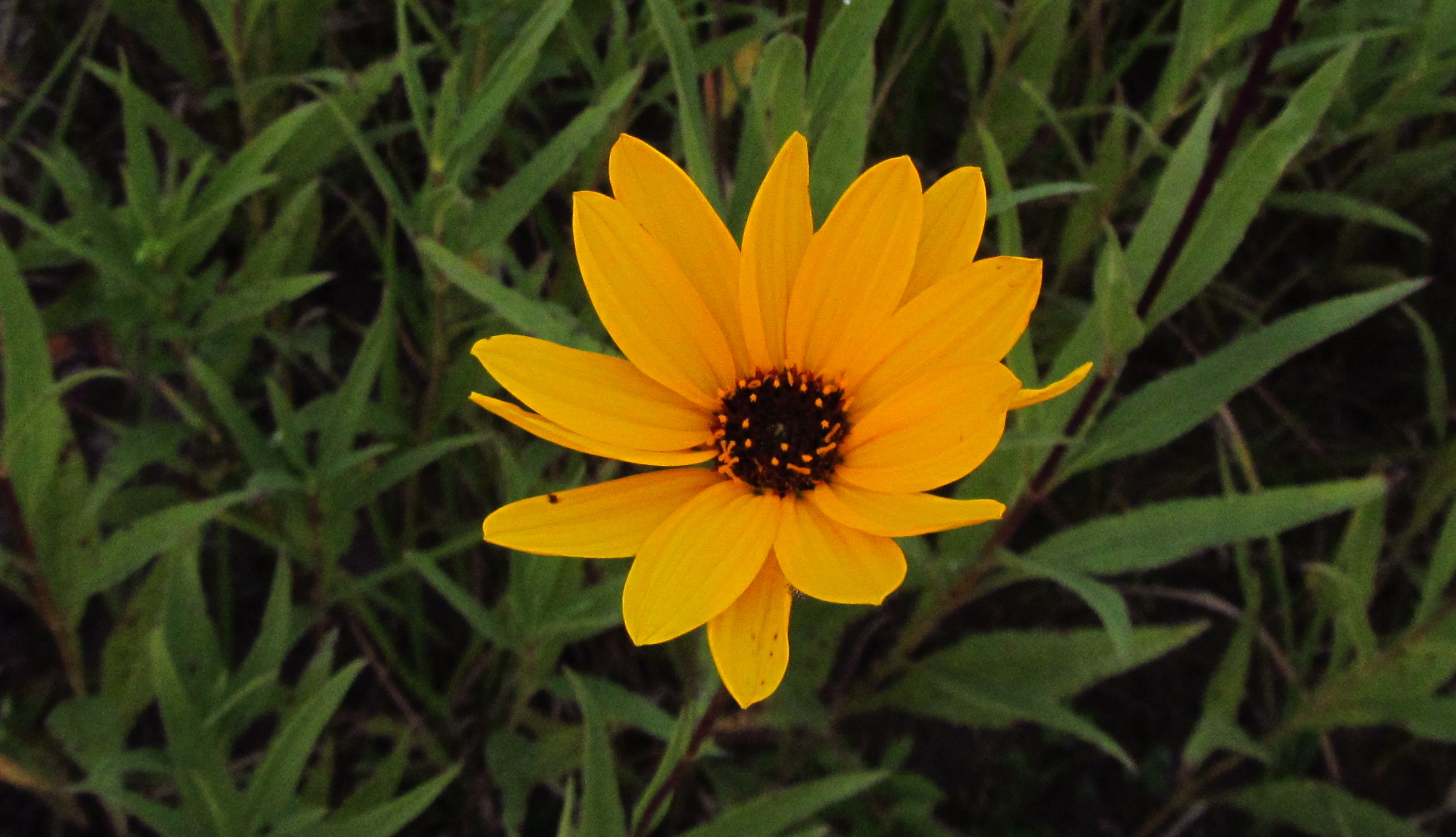 Some plants have only one flowerhead at the top of the stem. 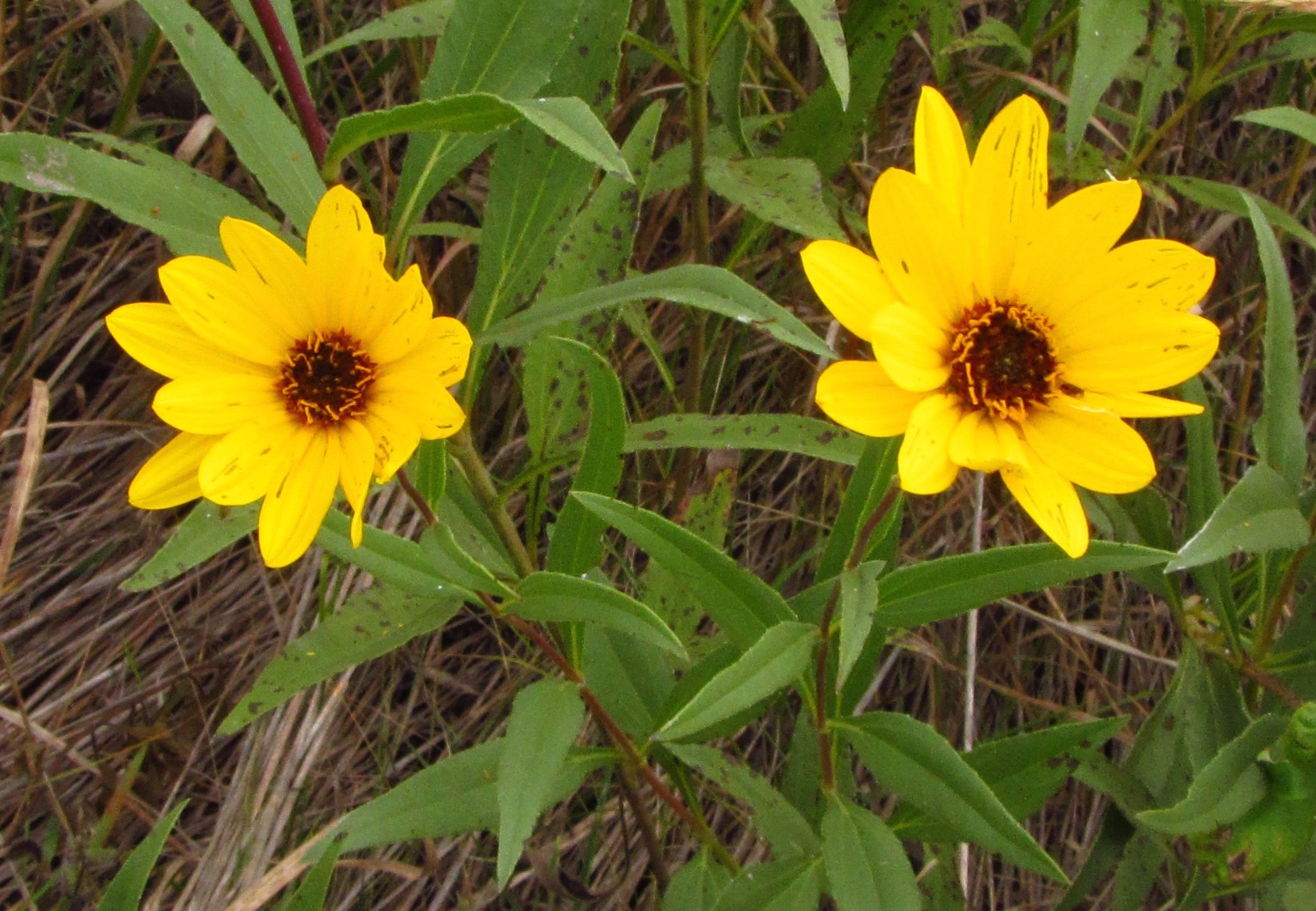 Others have a branched stem, with a flowerhead at the top of each upper stem. 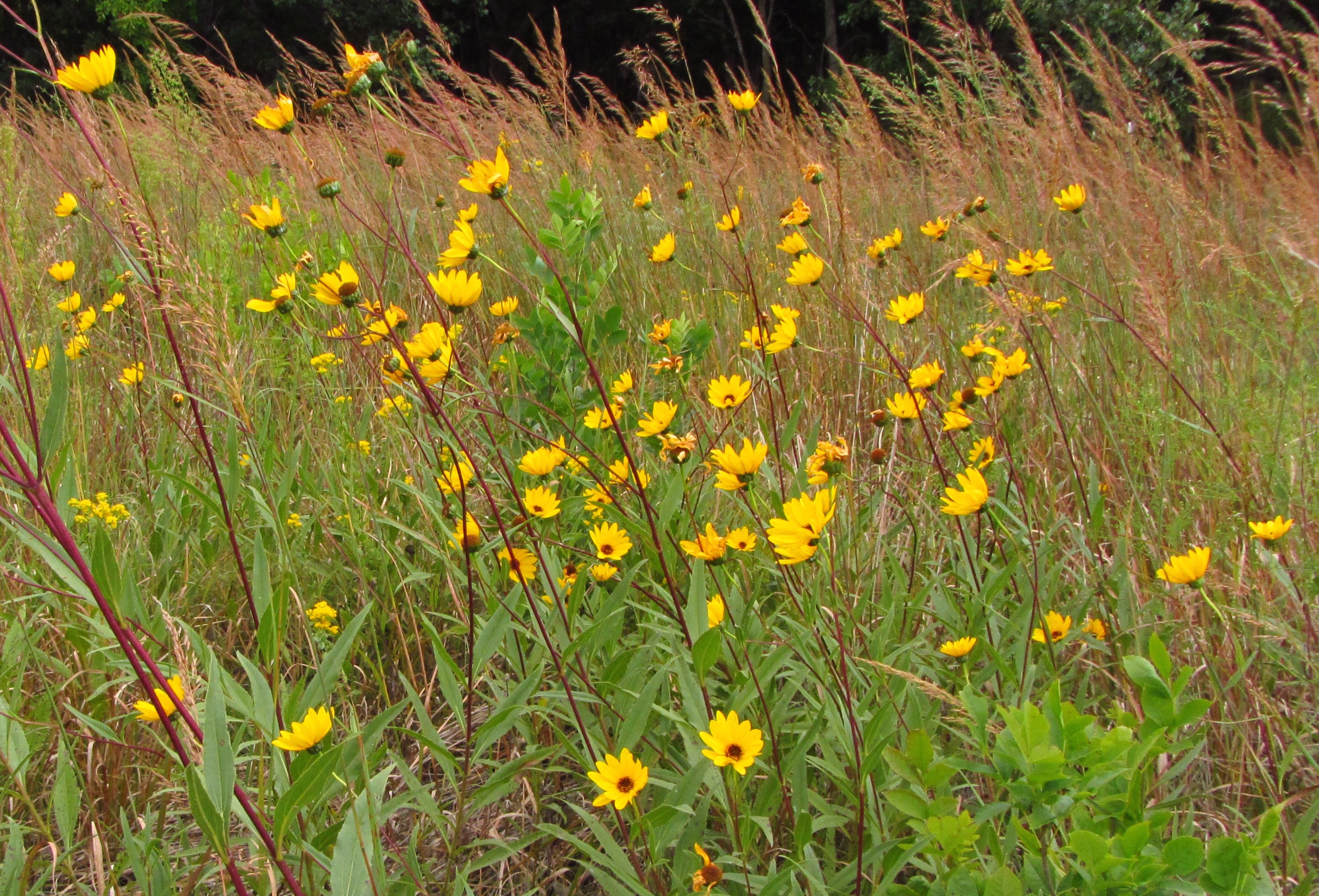 Some of the plants lean over and can appear to be growing sideways. 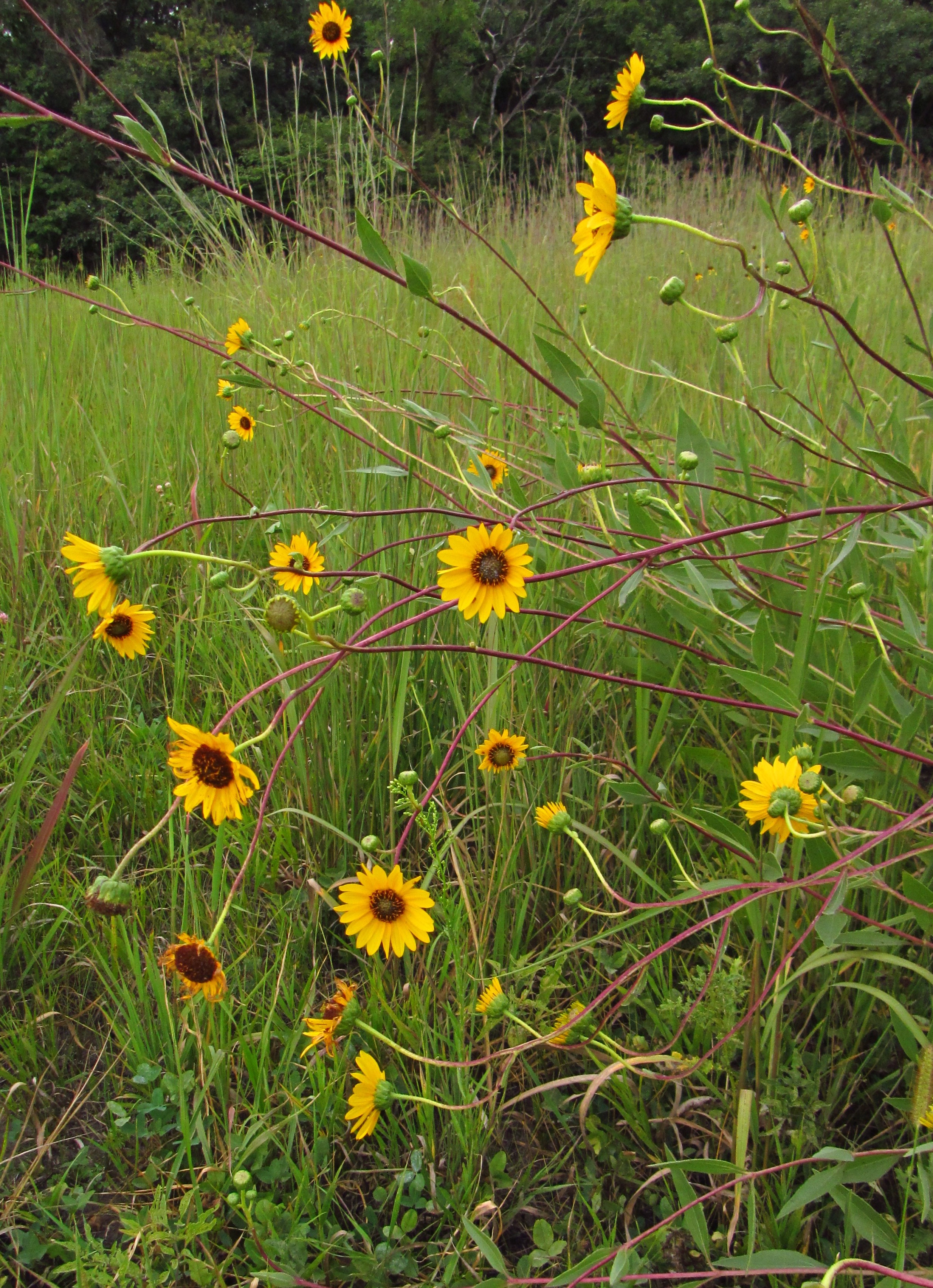 Prairie sunflowers attract many species of bees as well as bumblebees, some butterflies, bee flies, and skippers. I don't know what kind of insect is sampling this center disk. 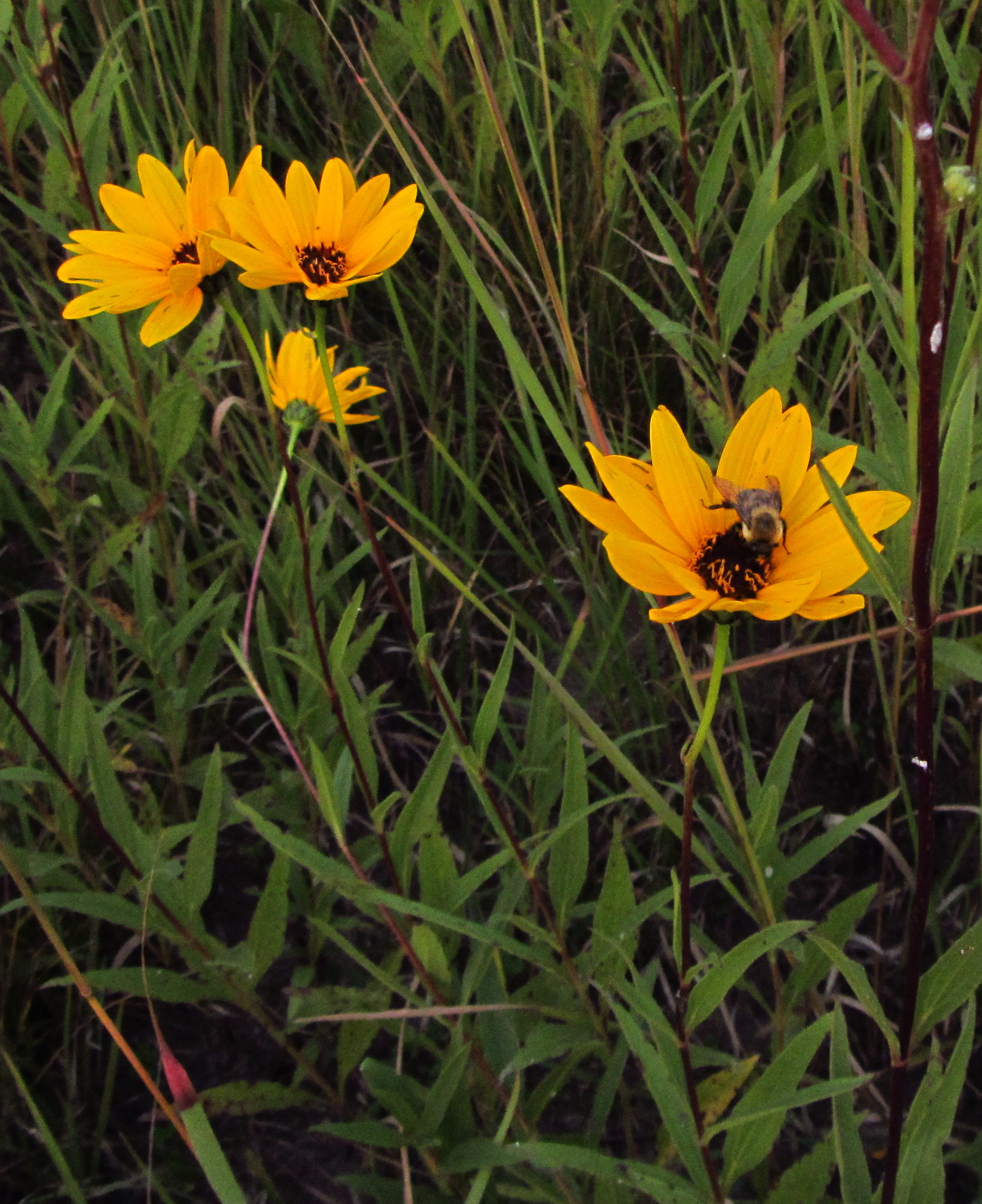 Although sunflowers were blooming all around, this grasshopper was hanging out on a disk after the ray florets (which look like petals) had dropped away. 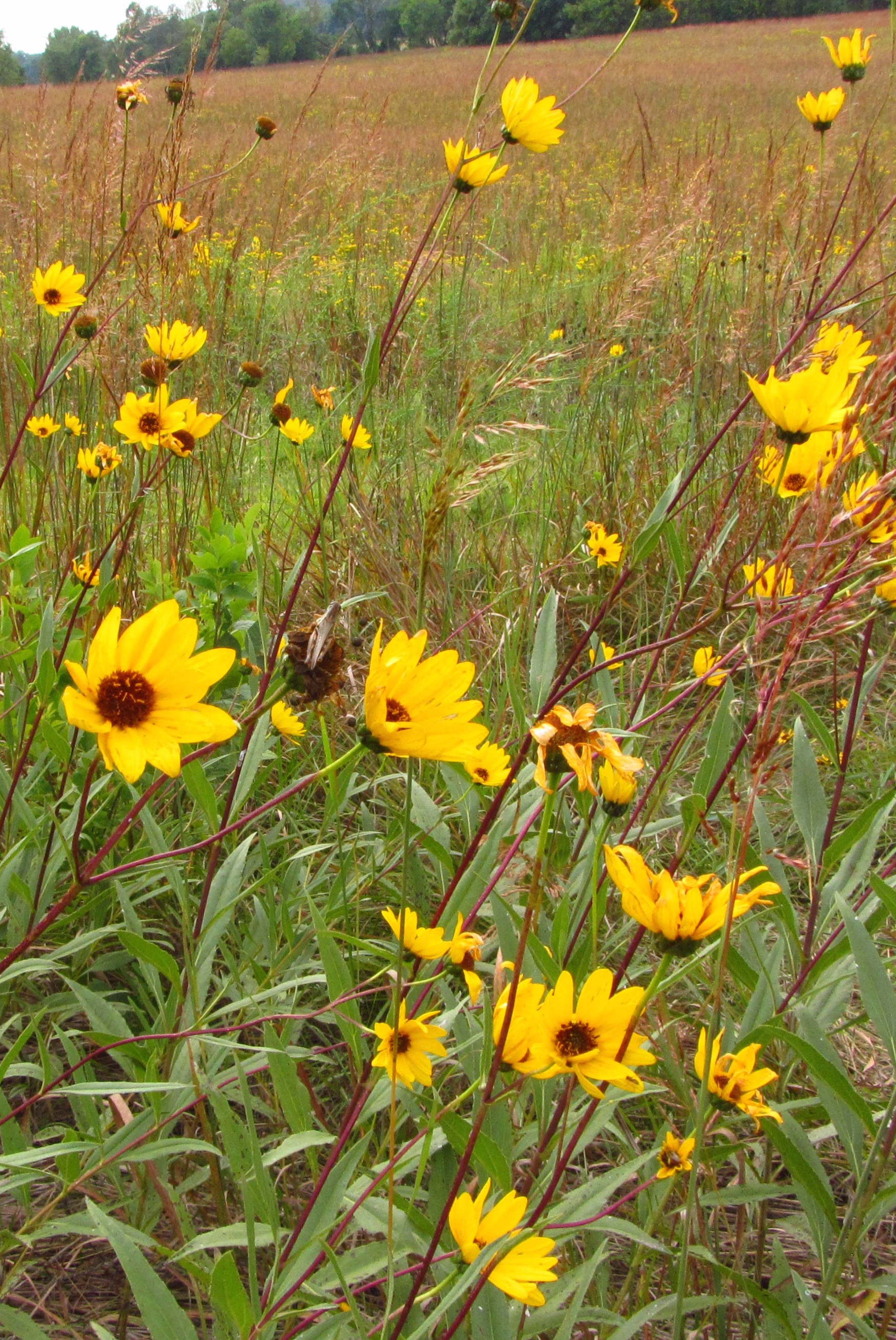 The ray florets are past their prime on this plant. 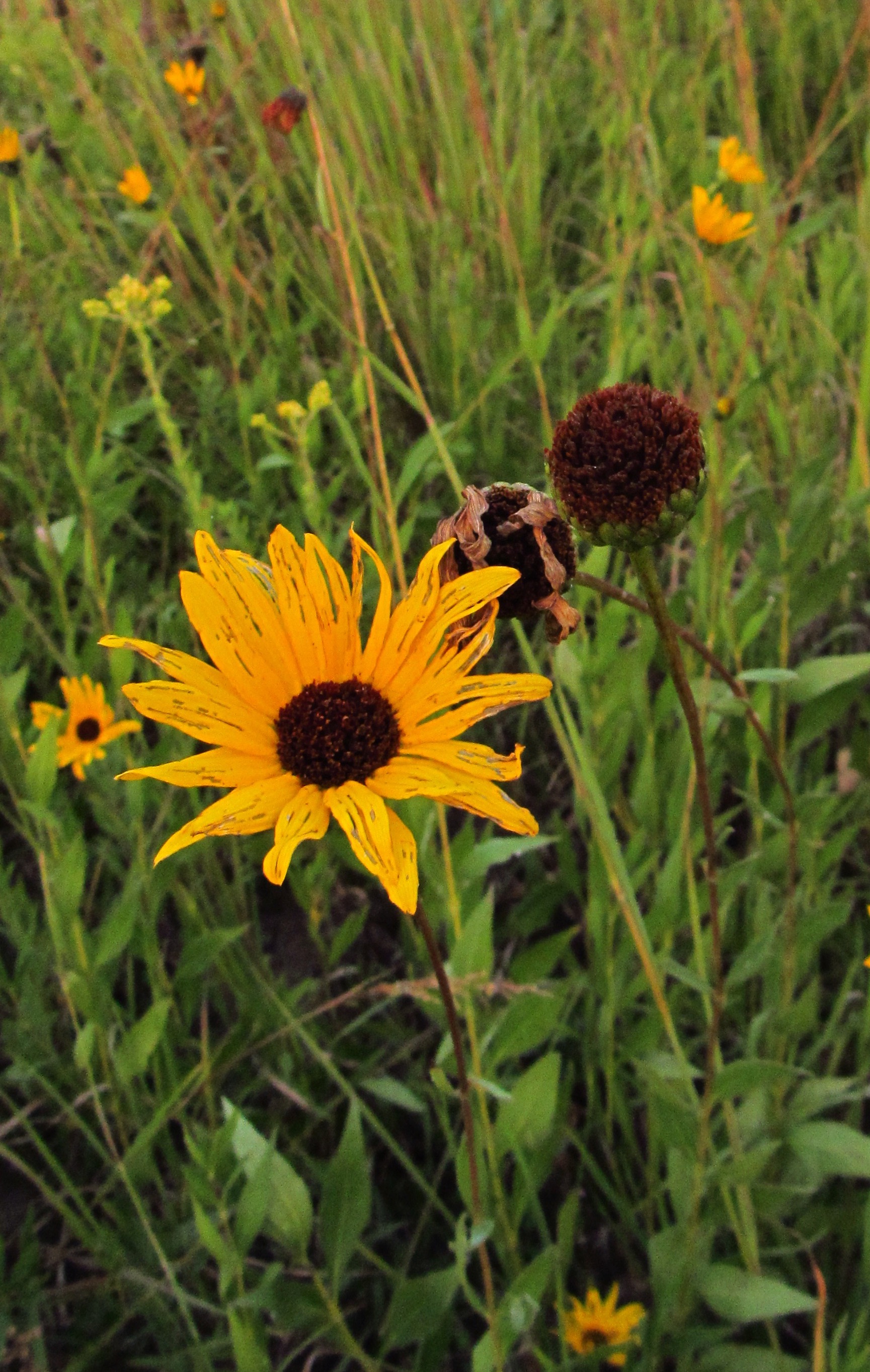 One plant may have flowerheads in different stages of blooming. 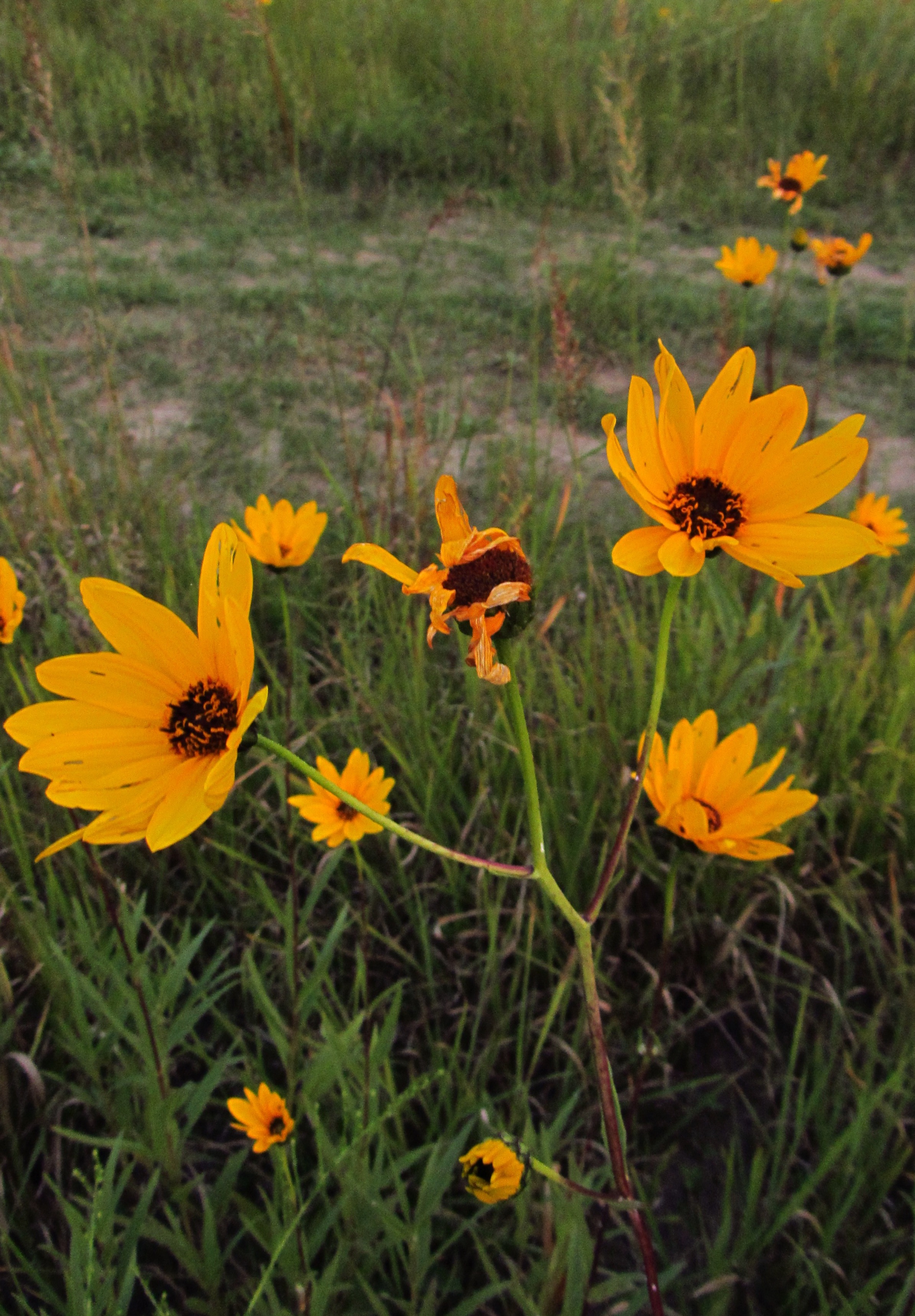 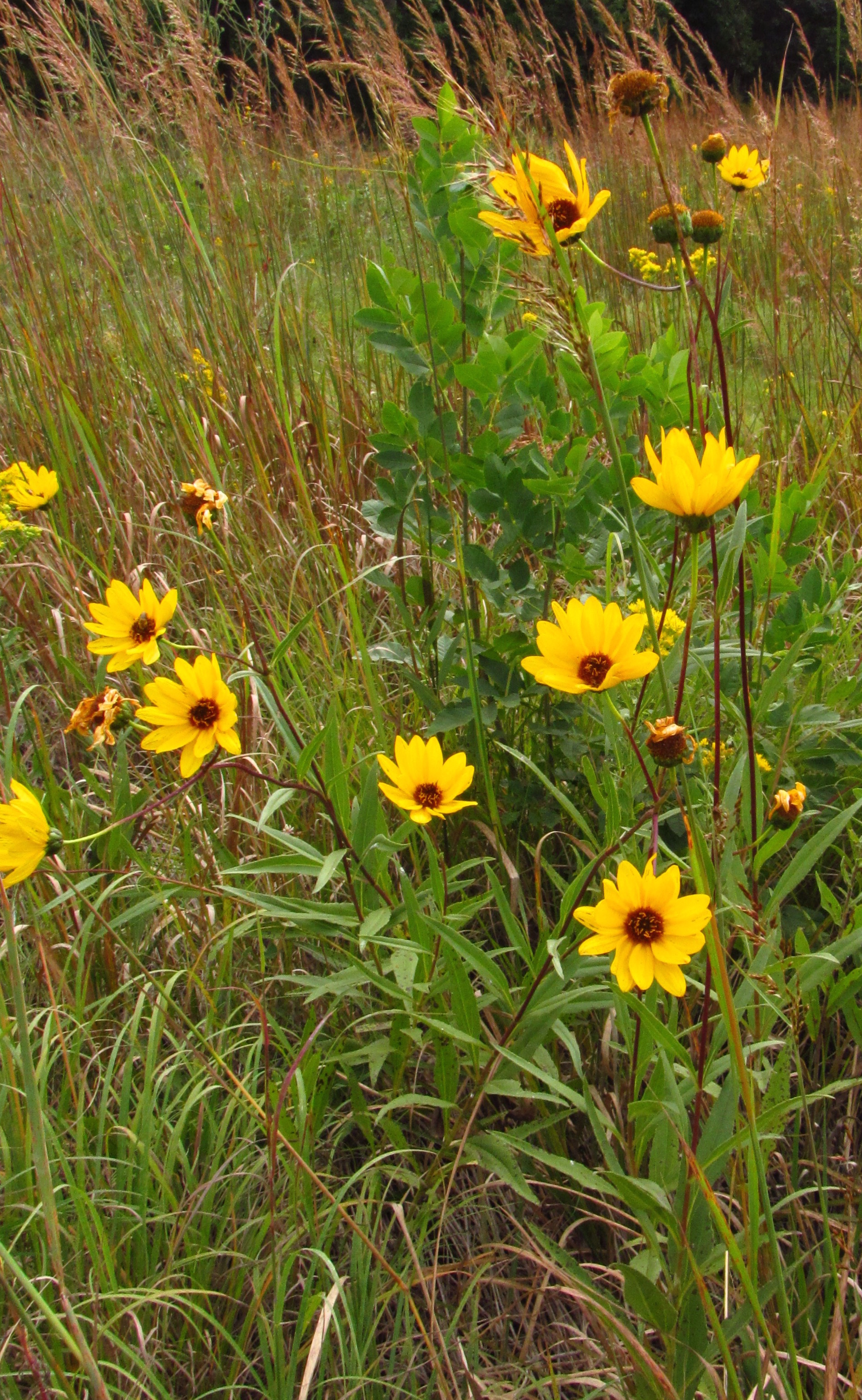 This prairie sunflower is growing near some kind of blazing star, I think rough blazing star. 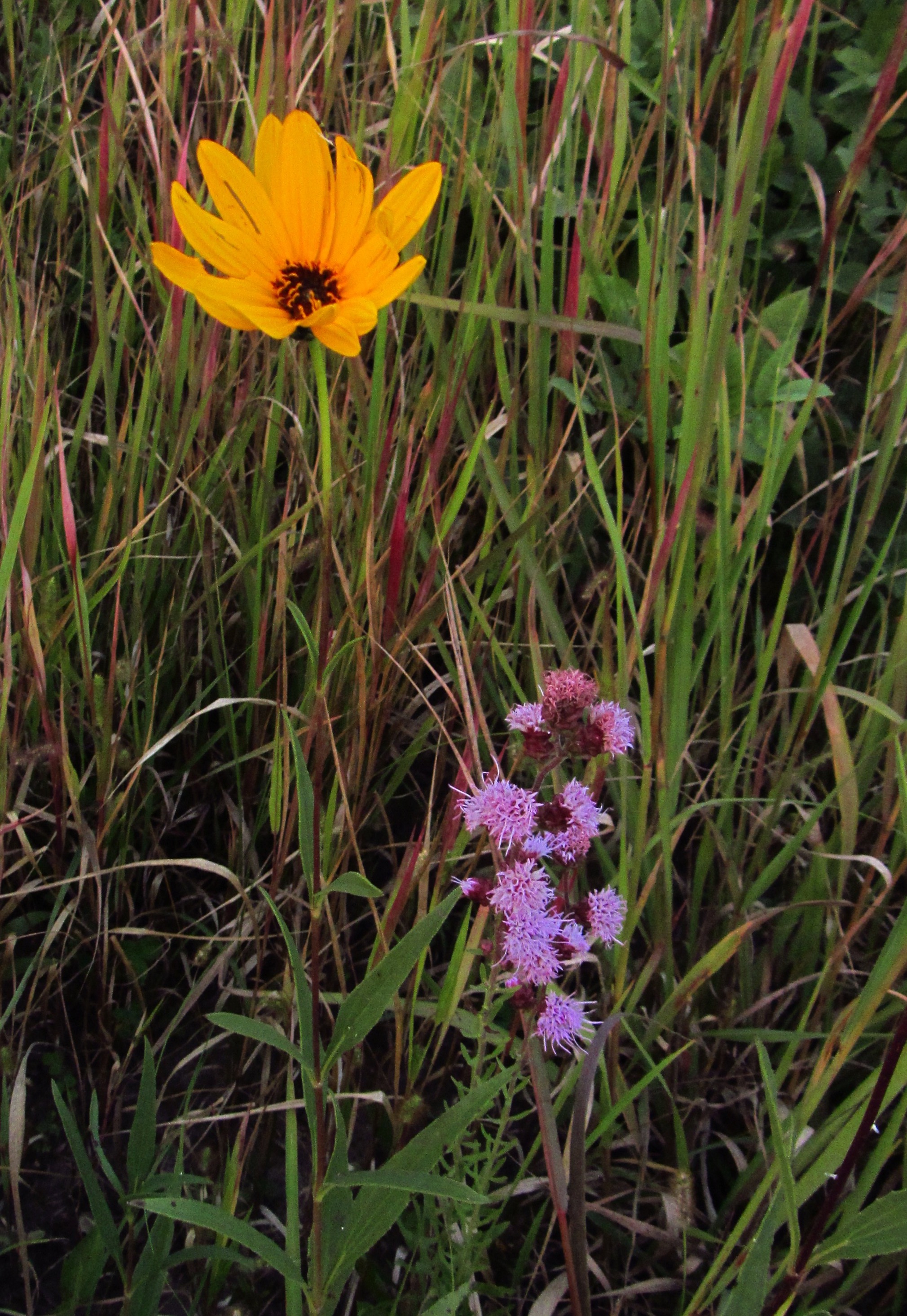 Rattlesnake master is in the foreground here. Those wildflowers tend to bloom in mid-summer, but the later rattlesnake masters can bloom at the same time as the earlier prairie sunflowers. 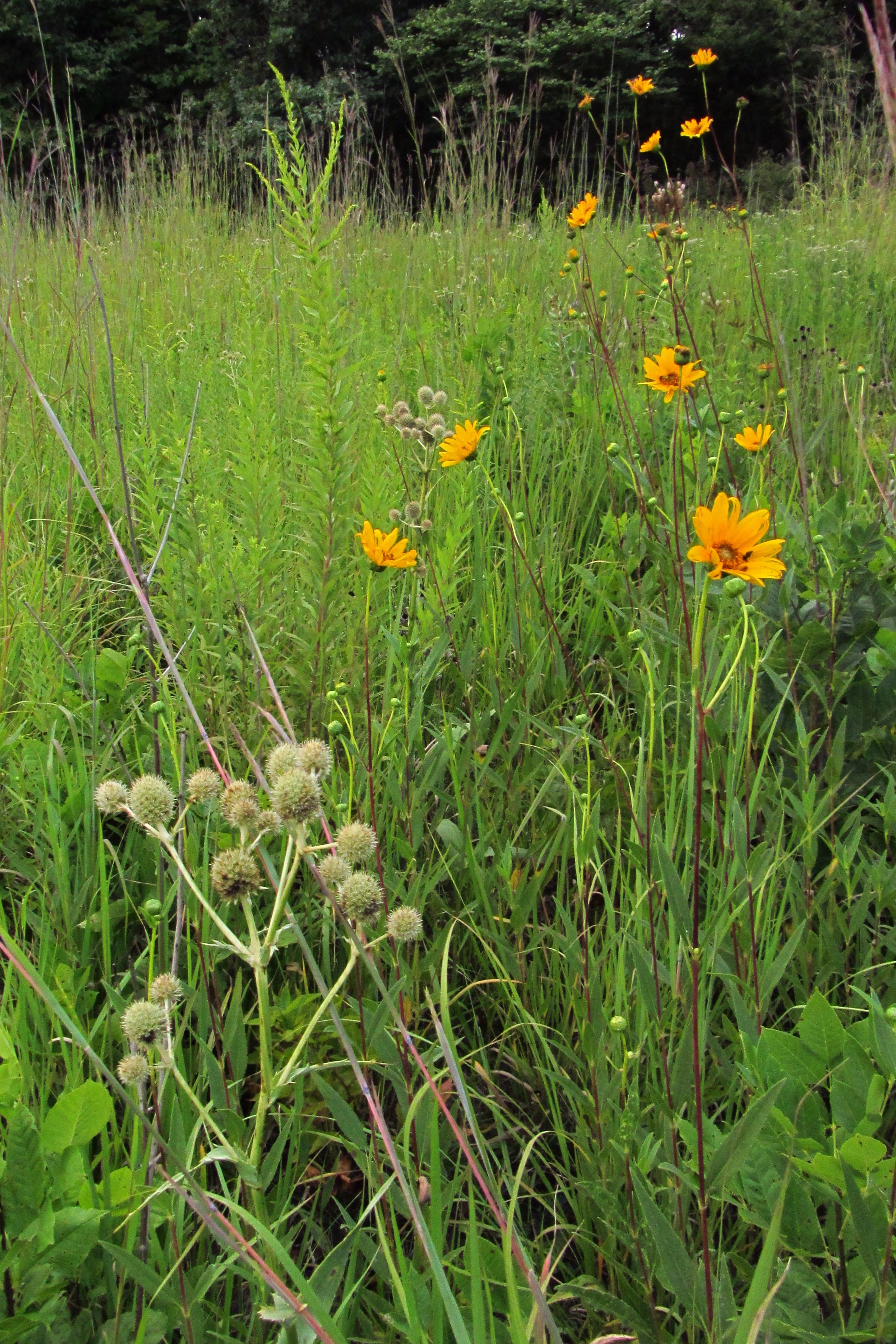 In these last two shots, stiff goldenrod is growing alongside prairie sunflowers. 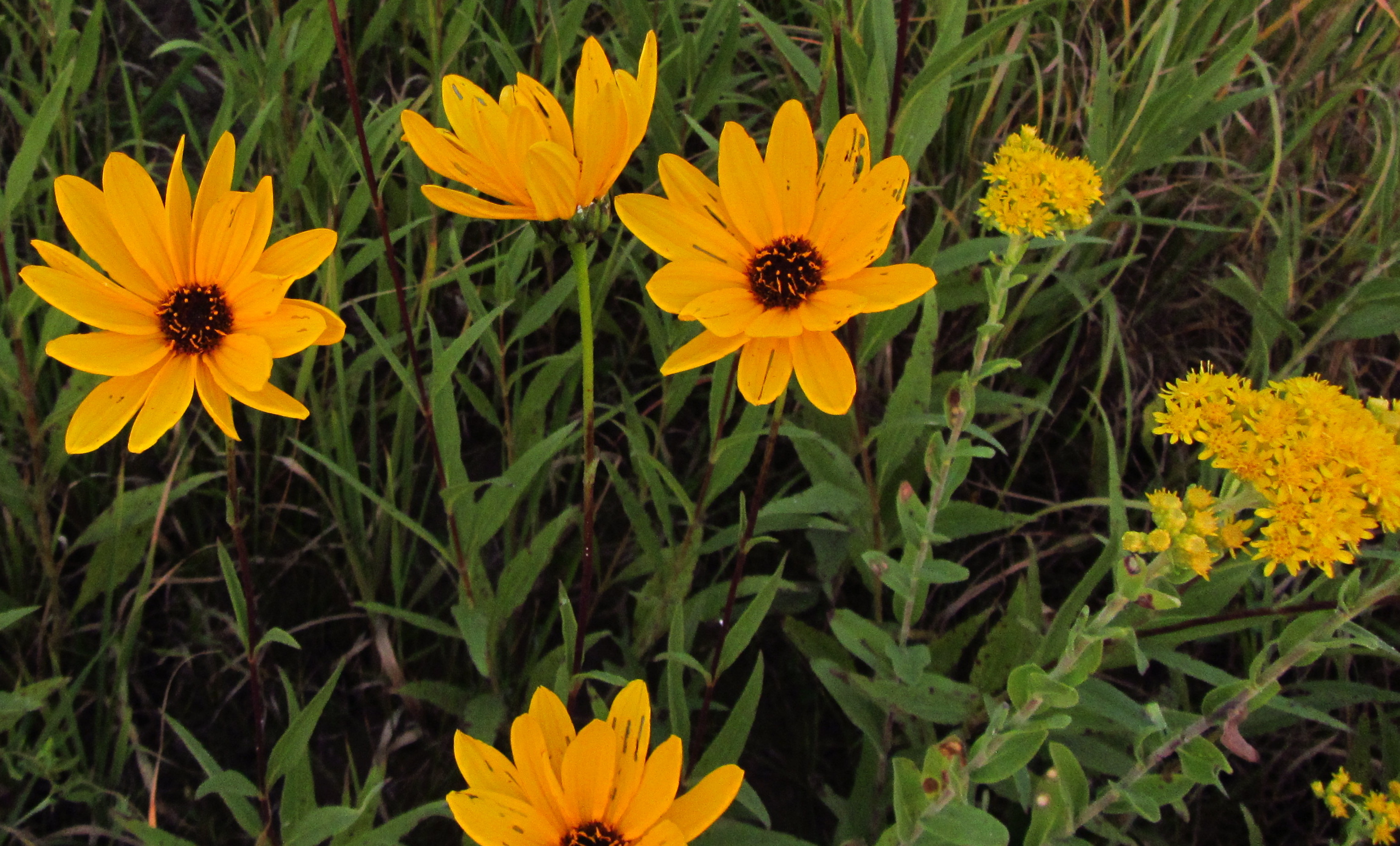 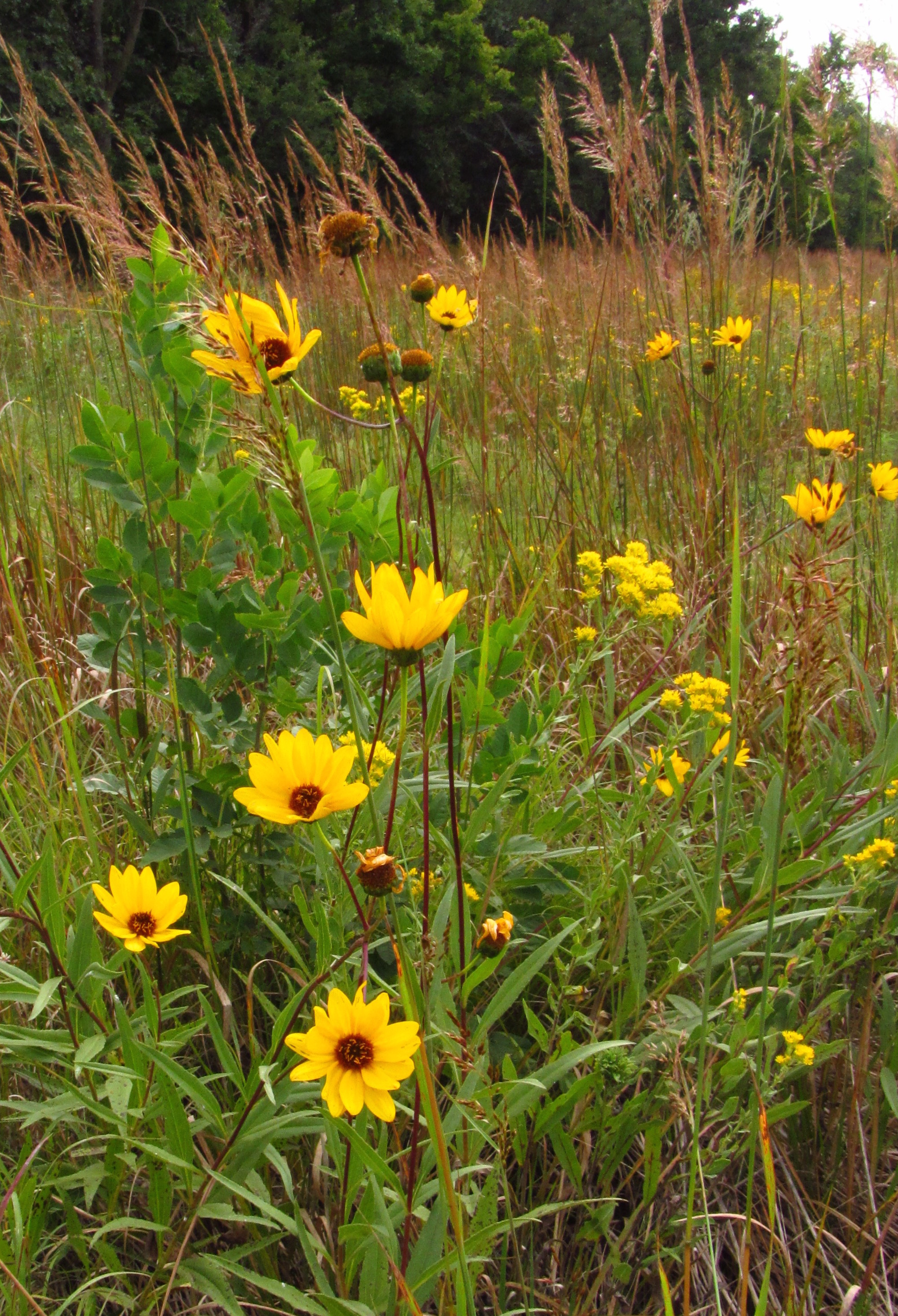