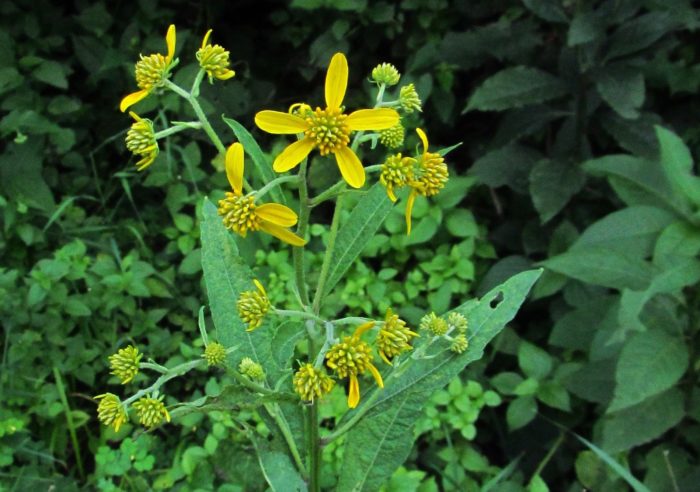 I’ve never felt more depressed working on a wildflowers post than I did while putting the finishing touches on the November 9, 2016 edition of Iowa wildflower Wednesday.

Yesterday’s elections around Iowa and the country put me in a sunnier frame of mind, so today I am featuring the bright yellow flowerheads of wingstem (Verbesina alternifolia).

This member of the aster family is native to most states east of the Rocky Mountains. In Iowa, wingstem typically blooms in the late summer and early fall. Although these plants are sometimes called yellow ironweed, they look nothing like the bright pink or purple ironweed often seen along Iowa roads and trails during the summer.

Long before this plant blooms, the “wings” (extra flaps of material growing along the length of the stem) are a dead giveaway. The next two pictures show plants I found in early June.

Here’s a closer view of the “wings”:

Like other asters, wingstem flowerheads have disk florets surrounded by ray florets (which look like petals). The ray florets are starting to open in these shots, which I took in August:

According to the Illinois Wildflowers site, habitats for wingstem

I frequently see it growing near bike trails that run alongside rivers or creeks. Here’s part of a large wingstem colony next to the Windsor Heights trail:

Wingstem can reach heights of eight to ten feet. Most of the plants I’ve seen are between four and seven feet tall.

Wingstem plants sometimes flop over and appear to be growing sideways.

The same plant may have some flowerheads just starting to open, while others have finished blooming.

Wingstem flowerheads past their prime:

Gardeners beware: when I asked a knowledgeable acquaintance about wingstem five years ago, she described it as “the plant from hell,” because when she planted some seeds,

We have some wingstem growing in our yard. So far it hasn’t caused a problem, but I will keep an eye on it. Today I went out to take a picture of the seeds. Technically they are achenes, fruit containing a single seed.