Representatives Rod Blum (IA-01), David Young (IA-03), and Steve King (IA-04) joined most of their Republican colleagues in the U.S. House today to pass a tax bill that would greatly increase the federal deficit, conferring most of the benefits on corporations and people far wealthier than most Iowans. Tens of millions of low to moderate-income Americans would pay more in federal taxes if its provisions became law, because a number of tax credits and deductions would be scrapped or scaled back.

To cite just one example: ending a tax break for out-of-pocket medical expenses would have a "catastrophic effect on disabled people" as well as anyone who spends a substantial amount on chronic health conditions or fertility treatments.

Meanwhile, an estimated 203,000 Iowa children would be either fully or partially left out of the expanded Child Tax Credit included in the House bill. Repealing the estate tax, which applies "only to the value of an estate that exceeds $5.5 million per person ($11 million per couple)," would benefit about 70 Iowa families in 2018, some 0.2 percent of all estates.

House Republicans know their tax plan will cost many Americans more. For that reason, before bringing the bill to the floor--with no hearings--they waived a rule that "had been put in place to make it difficult to increase taxes."

Representative Peter King of New York, one of thirteen Republicans to vote against the bill today, commented to Vox, “You’re rewriting a tax code for a generation, and you are doing it in 10 days [...] In [1986] it took two years to put together a tax reform bill; they’re doing it in 10 days.”

Iowa's Republicans weren't concerned. At the end of this post, I've enclosed statements from Young, and King hailing today's legislation, along with critical comments from Representative Dave Loebsack (IA-02). Like every other House Democrat who was present, Loebsack voted against the bill. I will update as needed with comments from Blum. UPDATE: Added Blum's statement.

The tax bill approved by the House Ways and Means Committee on November 9 is fiscally irresponsible. The bill would cost nearly $1.5 trillion over the decade, according to Joint Committee on Taxation (JCT) estimates. But provisions in the bill that would phase in slowly or expire after several years obscure the bill’s true cost and would almost certainly drive the ultimate cost even higher.

Further, the costs would continue beyond the ten-year window shown in the official cost estimates, adding substantially to the nation’s debt burden. A new analysis by Penn Wharton economists that also takes into account the bill’s effects on the economy and the interest burden from higher debt levels estimates that it would add roughly $3 trillion to the debt between 2028 and 2037, the next decade beyond the current ten-year budget window.

The House bill looks "very different" from the Senate Republican proposal, as Tara Golshan explained here. (For example, the House measure does not repeal the individual mandate to purchase health insurance.) How much of today's bill might end up on President Donald Trump's desk is not clear.

What is clear: despite posturing as deficit hawks when convenient, Iowa's GOP representatives in the House are willing to put the country deeper in debt for benefits that mostly would help their wealthiest constituents. The Institute on Taxation and Economic Policy calculated earlier this month,

The Tax Cuts and Jobs Act, which was introduced on November 2 in the House of Representatives, includes some provisions that raise taxes and some that cut taxes, so the net effect for any particular family’s federal tax bill depends on their situation. Some of the provisions that benefit the middle class — like lower tax rates, an increased standard deduction, and a $300 tax credit for each adult in a household — are designed to expire or become less generous over time. Some of the provisions that benefit the wealthy, such as the reduction and eventual repeal of the estate tax, become more generous over time. The result is that by 2027, the benefits of the House bill become increasingly generous for the richest one percent compared to other income groups. See below for how the bill would affect Iowa residents’ federal taxes and read our full report on the bill here.

The graphs below illustrate how the bill would affect taxpayers in Iowa in four ways:

The Center on Budget and Policy Priorities illustrated the House bill's nationwide impact in these graphics: 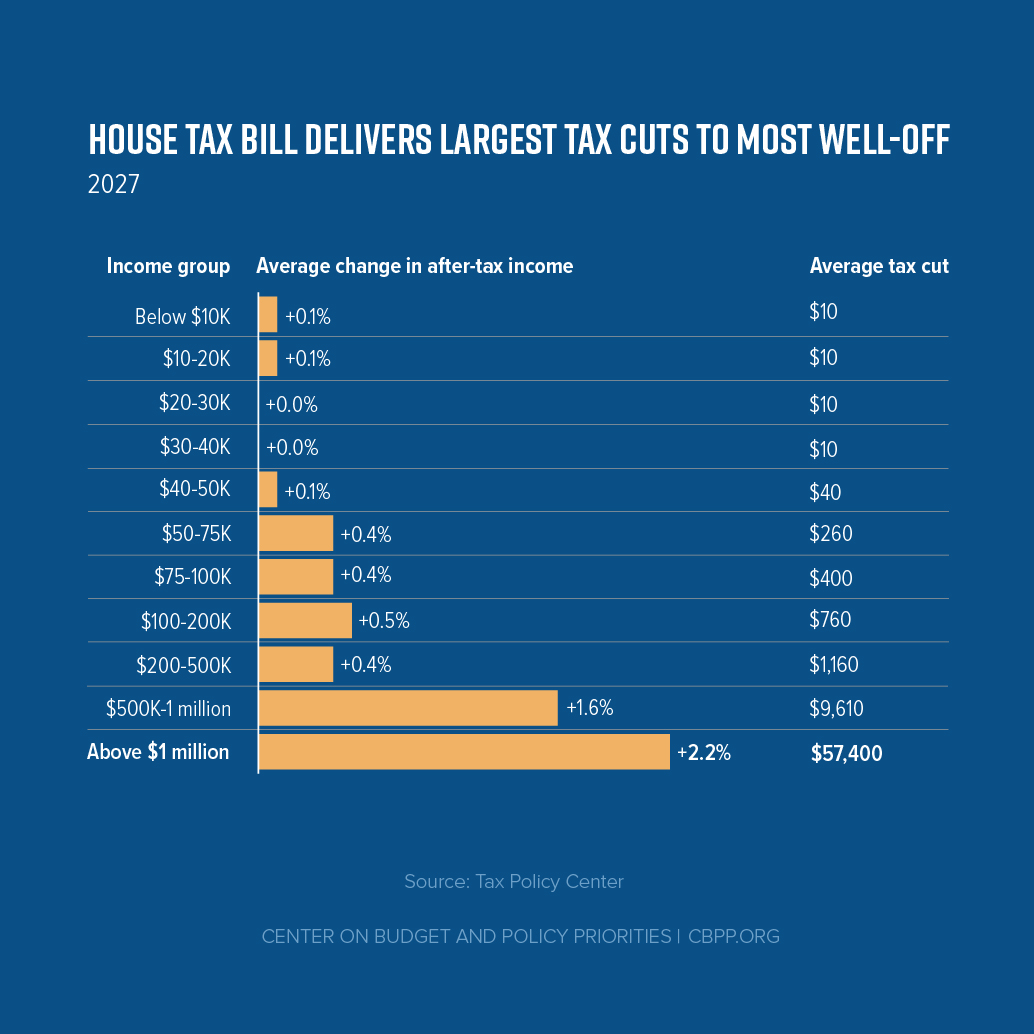 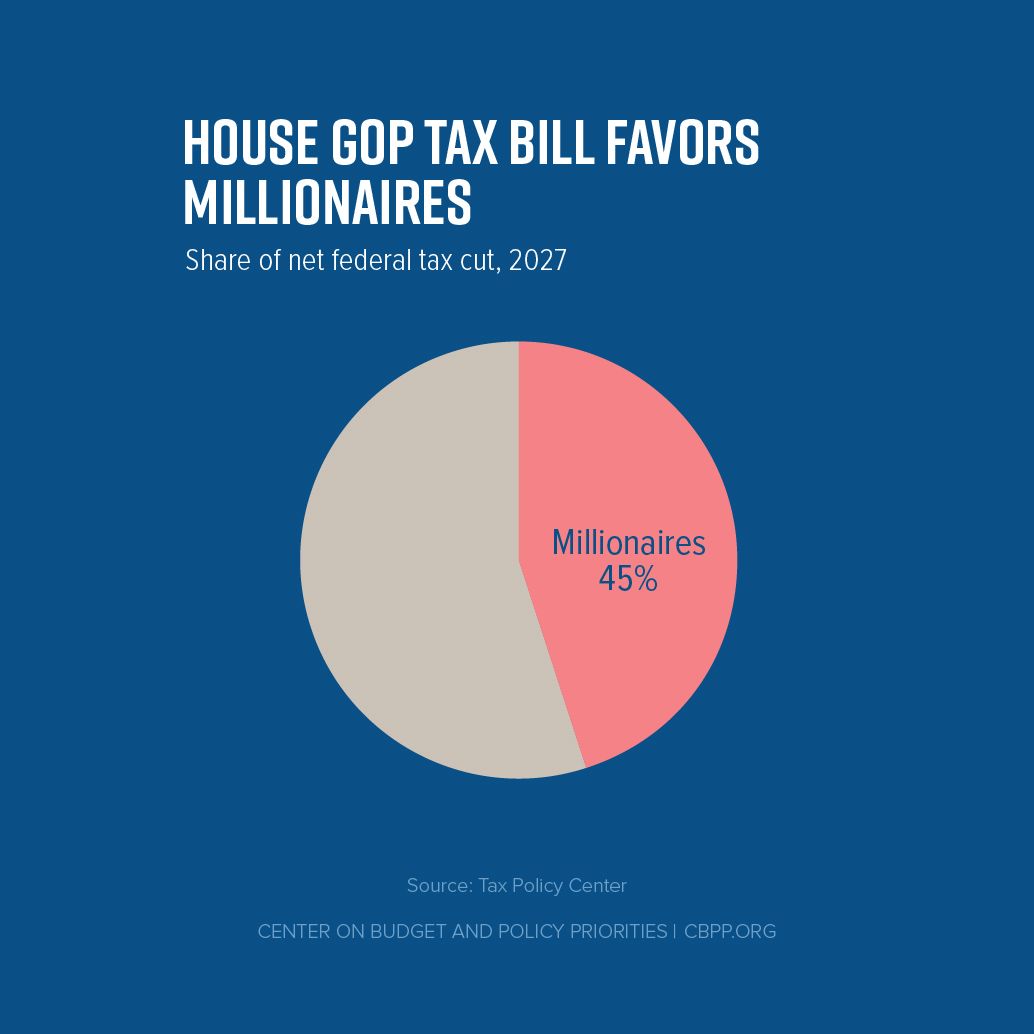 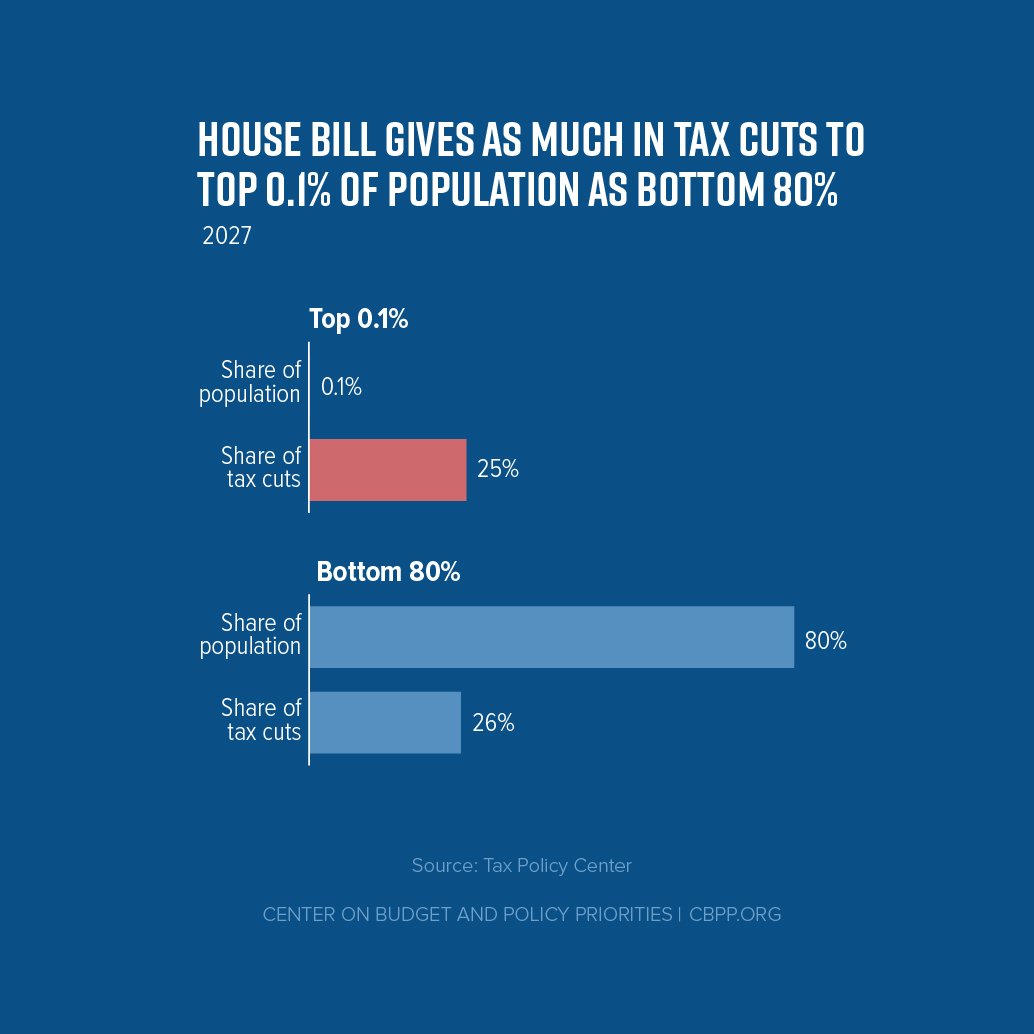 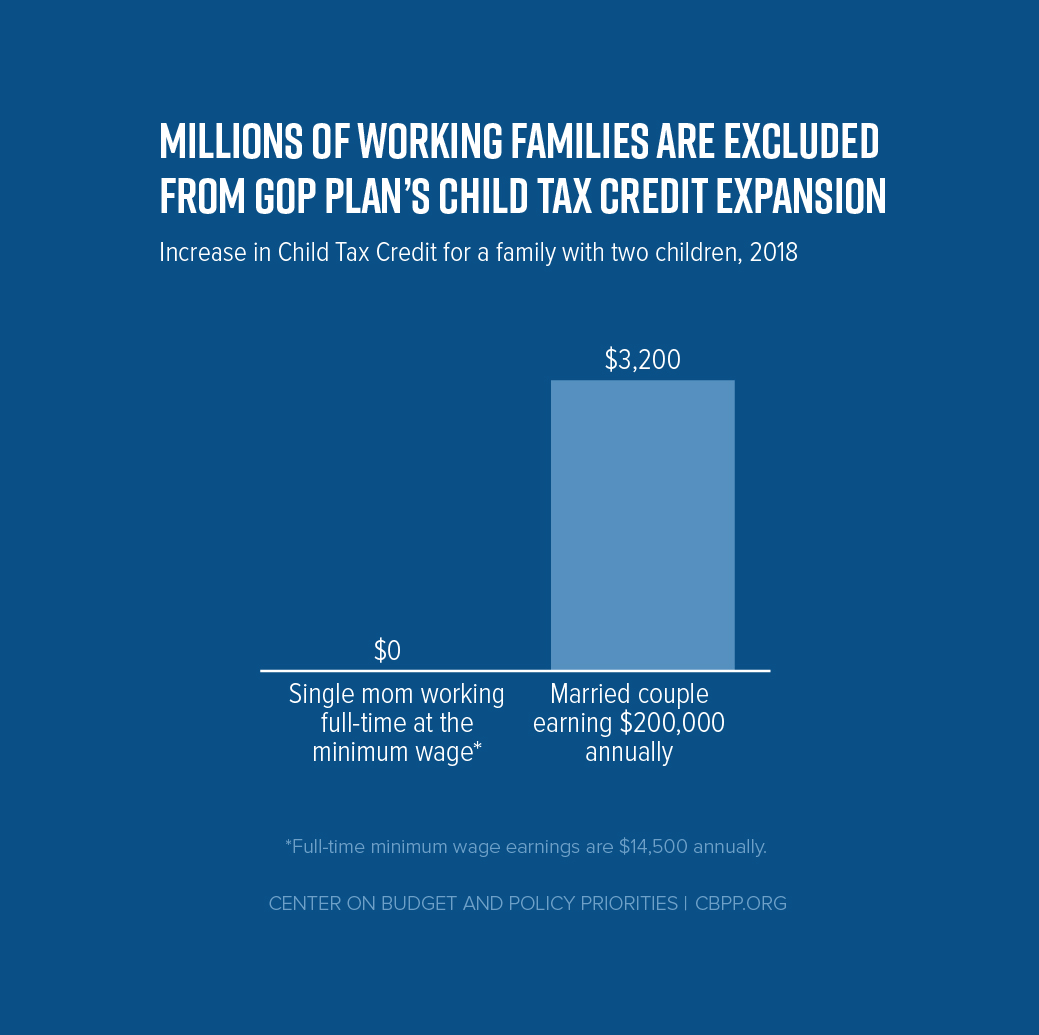 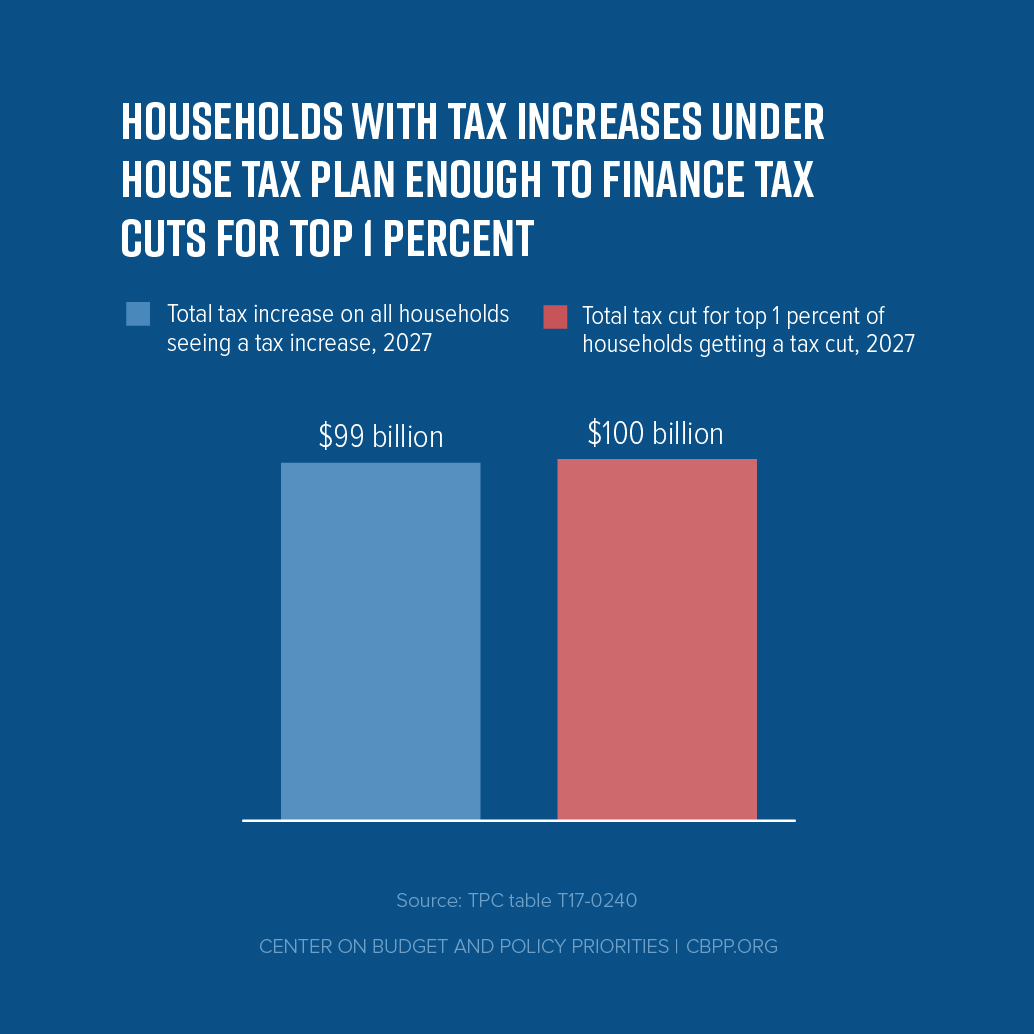 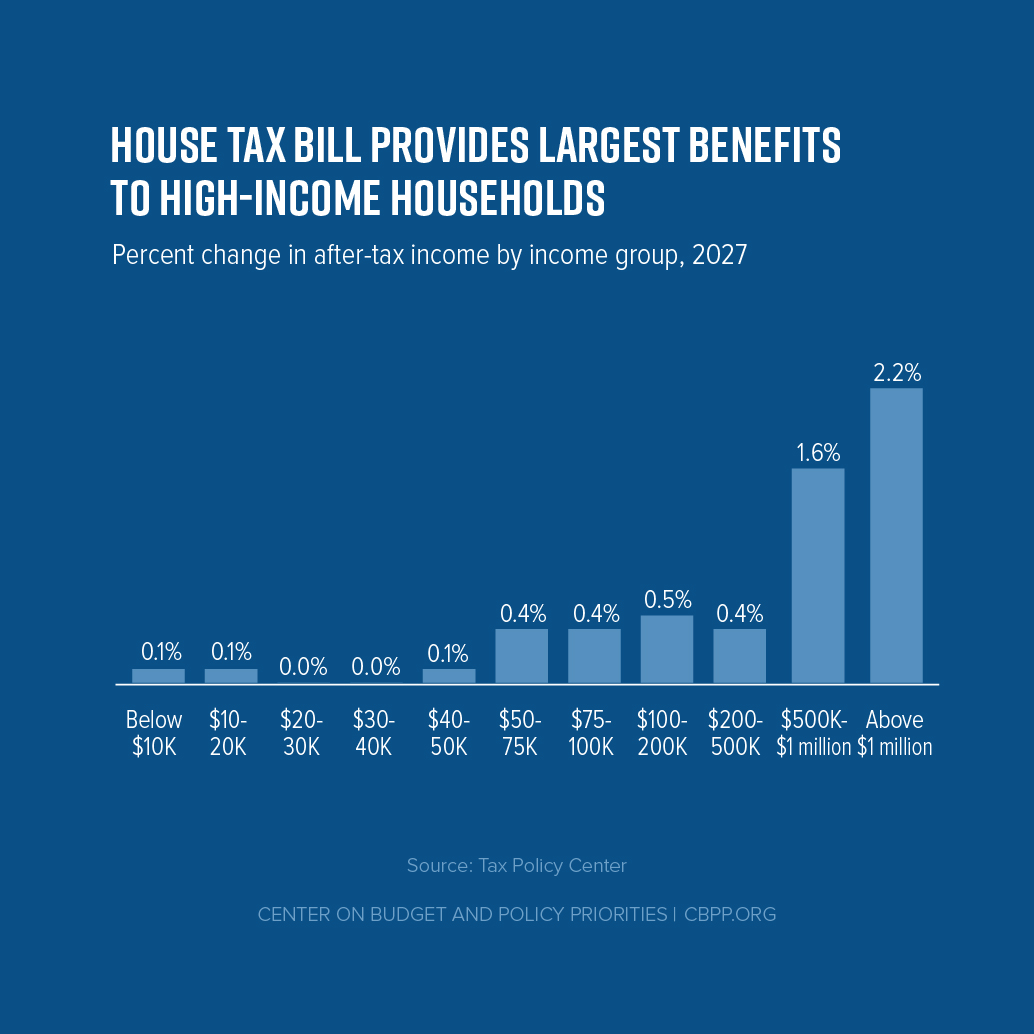 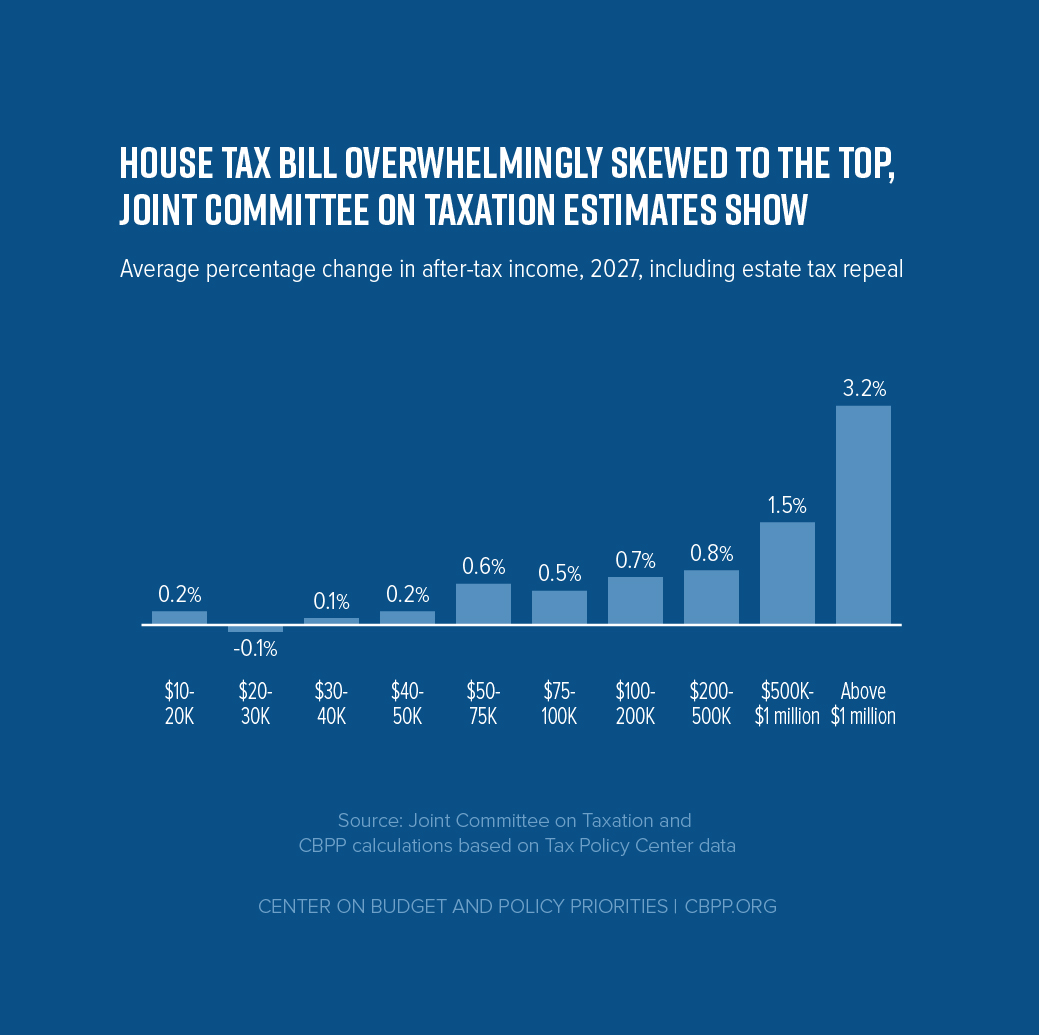 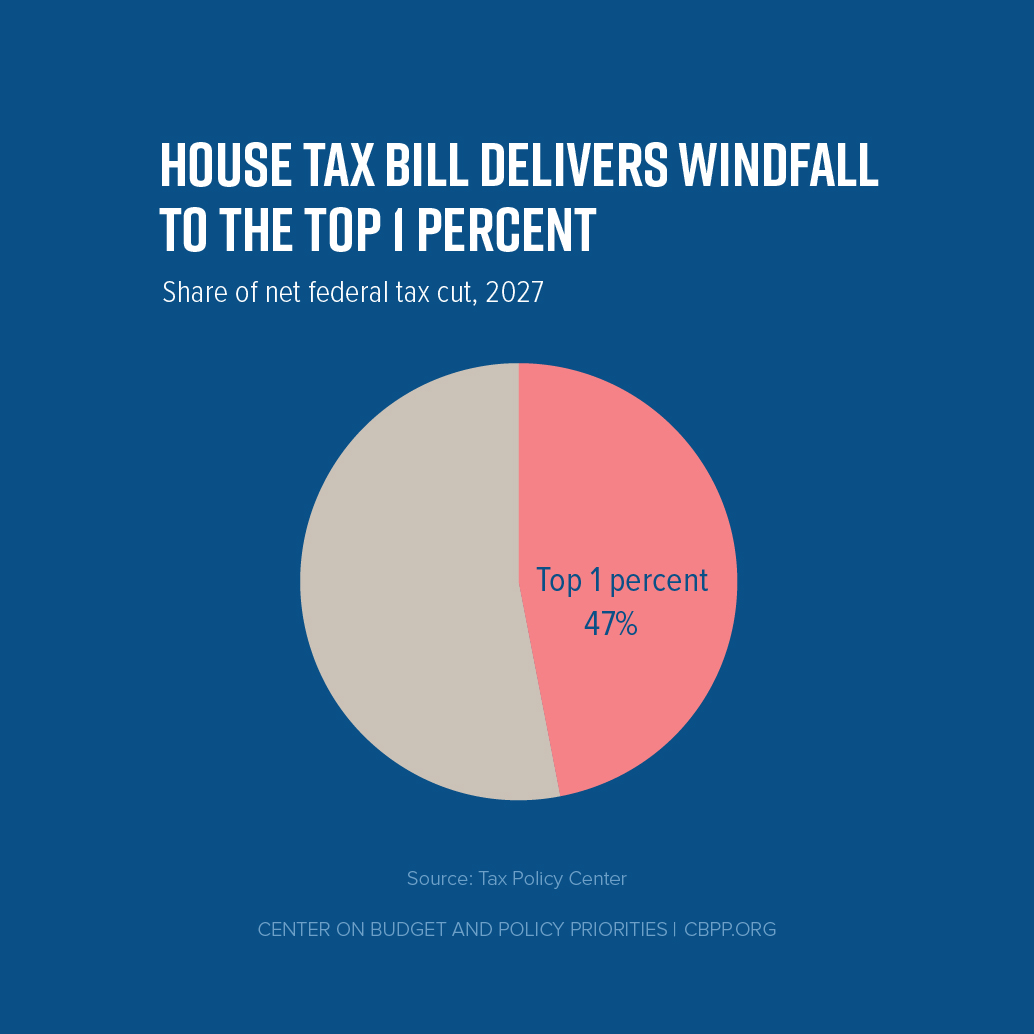 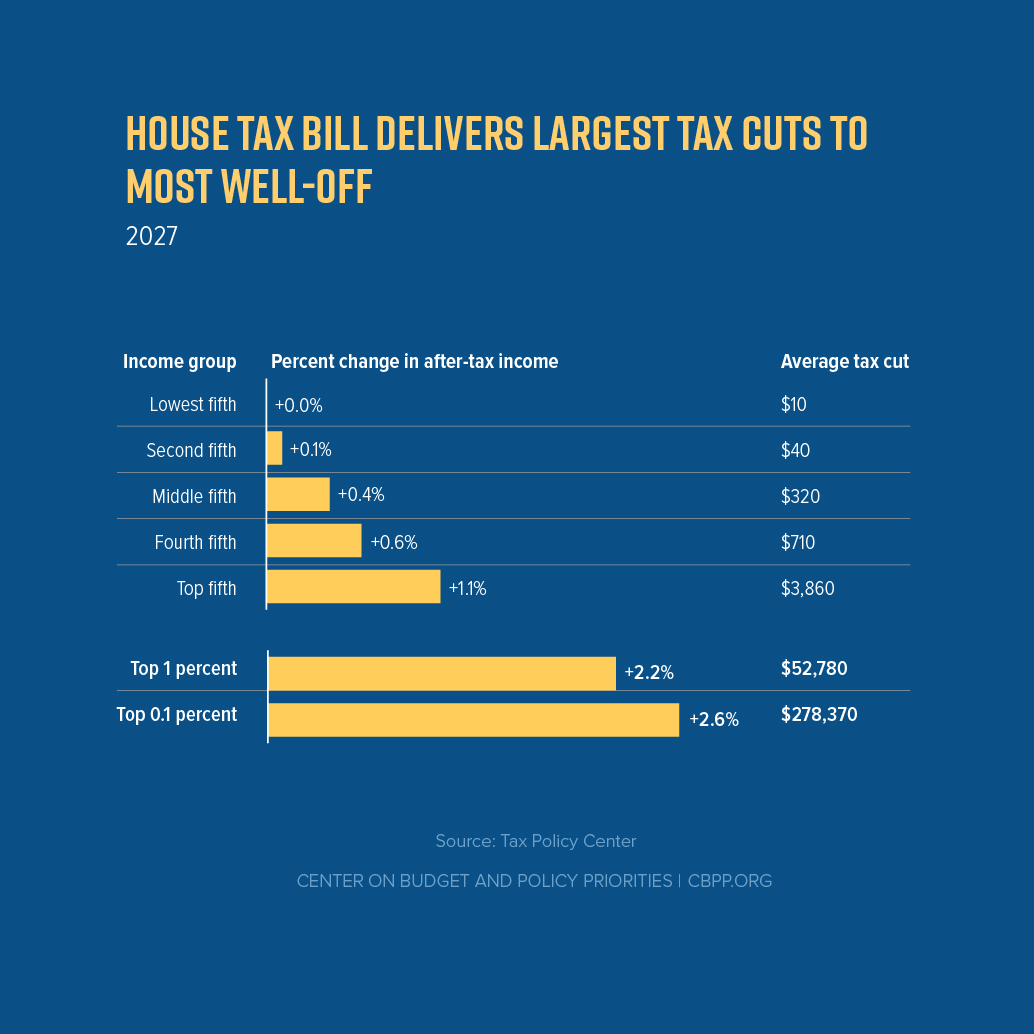 "The House's passage of our tax relief and job creation bill is a victory for Iowans as we continue the process to deliver tax relief for Iowa's hardworking taxpayers, build a healthy economy, and fix our broken tax code. Iowans deserve a tax code that is respecting and rewarding their hard work and protecting a lifetime of savings. My vote today reflects my trust in Iowans to spend their money better than the federal government. So I look forward to working with my colleagues in the Senate to make needed improvements to the bill and put a final version on the President's desk to lessen the burdens on hardworking taxpaying Iowans," Congressman Young said.

Washington, D.C.- Congressman Steve King releases the following statement after voting in favor of tax reform legislation that will provide a tax cut to Iowans while also providing a stimulus for the creation of jobs in the state. King voted in favor of H.R.1, the Tax Cut and Jobs Act, which passed the House of Representatives today on a vote of 227-205.

“The passage of today’s historic tax reform legislation represents the best opportunity Congress has had in 30 years to reform the nation’s complex and outdated tax code in a manner which will provide Iowans with tax relief, a simpler tax return, and a better economic climate for job creation,” said King. “This legislation will stimulate the economy and launch the United States onto a growth path that can produce a better than 3% annual GDP growth rate for the next decade or more. In addition, I welcome the inclusion of provisions which increase the size of the standard deduction, increase the size of the child tax credit, preserve the adoption tax credit, allow businesses to immediately write off the full cost of new equipment, lower corporate tax rates to a competitive level, and provide for the full repeal of the Death Tax. This legislation will result in a flatter, fairer, and simpler tax system that will benefit individuals, families, farms, and small businesses throughout Iowa.”

“While I support the package that passed the House of Representatives today, it would have been much improved with the inclusion of the Senate’s provision to repeal ObamaCare’s Individual Mandate fine. Over 52,000 Iowans paid this fine in 2015, and 82% of them had incomes between $10,000 and $50,000. The House would do well to follow the Senate’s lead by supporting the provision repealing the Obama/Roberts ‘ObamaCare tax’ going forward.”

An independent analysis of H.R. 1, the Tax Cuts and Jobs Act, prepared by the Tax Foundation, shows that the legislation will result in the creation of 975,000 jobs nationally, including 9,600 in Iowa, over ten years.
The same analysis indicates that a middle-income family in Iowa will see a gain in after tax-income of $2,246 over ten years.
89,133 taxpayers in the 4th District itemize their taxes. As a result of the standard deduction being increased from $6,350 to $12,000 for individuals (and from $12,700 to $24,000 for married couples), many filers will have simpler taxes and a larger total deduction to take.
58,340 taxpayers in the 4th District claim the child tax credit; the legislation increases the credit from $1,000 per child to $1,600 per child.
H.R. 1 provides relief from the unfair “Death Tax,” which often falls hardest on family-owned farms and small businesses, by doubling the exemption and fully repealing the tax in seven years.
H.R. 1 contains a provision allowing businesses to immediately write off the full cost of new equipment.
H.R. 1 lowers the corporate tax rate from 35%, the highest in the industrialized world, to 20%. This change will stimulate job creation and encourage more American companies to return jobs and business operations to the United States rather than send them abroad.
In many cases, ObamaCare premiums are so high, that Americans are forced to pay the unjust ‘Individual Mandate’ fine rather than purchase insurance which doesn’t suit their needs.
The ObamaCare Individual Mandate Tax, as designated by United States Supreme Court Justice John Roberts, falls disproportionately on Low-Income earners.
In Iowa, 82% of those paying the ObamaCare tax make less than $50,000/yr. This figure is 80% nationally.
Repealing the Individual Mandate would save more than $300 billion over ten years.
The Rules Committee refused to consider any amendments to the legislation. As a result, Congressman King’s H.R. 176- New IDEA legislation, which King offered before the committee, did not receive a vote. Congressman King continues to work for the adoption of his legislation, which would save an additional $254 billion over ten years by eliminating tax deductions employers who hire illegal aliens are currently able to take.

Washington, D.C. – Congressman Dave Loebsack released the following statement today after the House passed H.R. 1, the Republican’s tax plan. In a guest column, Loebsack had previously laid out his vision for what he believes should have been included in any tax proposal.

“The tax plan that was rushed through the House by Republicans will hurt everyday Iowans. The plan slashes taxes for millionaires, billionaires and corporations, while many middle class families, small businesses, seniors, teachers and veterans will be faced with an increase. On top of that, the bill cuts Medicare, Medicaid, education and job training initiatives in order to finance these tax cuts. That is unconscionable.

“In order to truly get the economy going we must reward hard work and incentivize and encourage companies to invest in jobs here at home and not ship them overseas. We also must address our nation’s debt in a reasonable way, not explode it by over $1 trillion, as this tax plan does. Finally, I believe that we must ensure that the millionaires, billionaires and corporations pay their fair share. It is wrong to give special breaks to the wealthiest at the expense of hard working Iowans.”

Congressman Blum commented, “My criteria for tax reform has always been based around these three goals: simplifying tax preparation for families, lowering taxes for the middle class, and reigniting our economy from the doldrums it's been in the last ten years. This bill achieves all three of those criteria.”

The Tax Cuts and Jobs Act:
Lowers individual tax rates for low and middle-income Americans
Eliminates special-interest deductions
Keeps charitable deductions
Establishes a new Family Credit, which includes expanding the Child Tax Credit
Significantly increases the standard deduction
Preserves the Child and Dependent Care Tax Credit
Reduces the tax rate on the hard-earned business income of Main Street job creators
Lowers the corporate tax rate to compete in a global economy
“The Tax Cut and Jobs Act will immediately spur economic growth, and I am proud to support this bill in its current form,” said Congressman Blum. “However, like most comprehensive bills in Congress, there are pieces of this bill I am not particularly in favor of, but democratic representative government demands compromise. I will continue to fight for Historic Federal Tax Credits moving forward into the conference committee with the Senate, which have been not only an economic boon to our rural downtown Main Streets in northeast Iowa but a net positive to the United States Treasury.”

For more information on the Tax Cuts and Jobs Act, please visit www.FairAndSimple.gop .