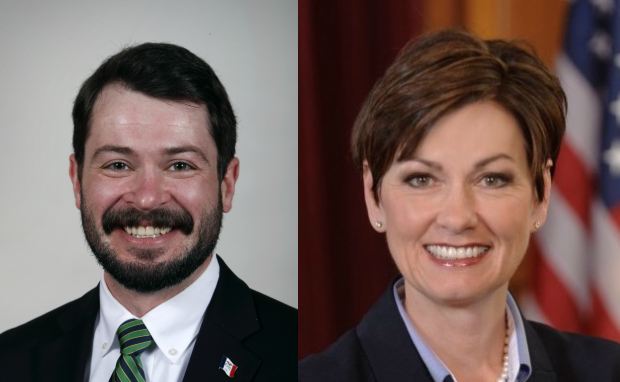 State Representative Chris Hall filed a lawsuit today, charging Governor Kim Reynolds and Department of Management Director David Roederer "conspired together to unlawfully appropriate and misuse state funds." The ranking Democrat on the Iowa House Appropriations Committee is seeking to void "all actions taken as a result of the unlawful Official Proclamation signed on September 28, 2017," which transferred $13 million from the Iowa Economic Emergency Fund.

That order allowed Reynolds to cover a projected budget shortfall at the end of fiscal year 2017 without calling a special legislative session. But State Treasurer Michael Fitzgerald warned the governor that the planned transfer "would not be in compliance with Iowa law." Hall's petition, enclosed in full below, points to the same Iowa Code provision Fitzgerald cited in his letter to the governor.

The court filing alleges that Reynolds and Roederer "unlawfully transferred money" to balance the budget because calling lawmakers back to address the shortfall "would have created a political problem" for the governor, "drawing attention to her inability to adequately manage the State’s fiscal affairs." Hall's lawsuit notes Iowa law

does not grant GOVERNOR REYNOLDS authority to transfer moneys from the State Economic Emergency Fund unless the “revenue estimating conference estimate of general fund receipts made during the last quarter of the fiscal year was or the actual fiscal year receipts and accruals were at least one-half of one percent less than the comparable estimate made during the third quarter of the fiscal year.” Iowa Code § 8.55(3)(c)(1).

21. In fiscal year 2017, the difference between the revenue estimating conference’s third quarter estimate of general fund receipts ($7.107 billion) and the actual net general fund revenue ($7.096 billion) was only $11 million, which is only .15%, which is short of the .5% threshold set forth in Iowa Code section 8.55.

22. The variance requirement in section 8.55(3)(c)(1) is important because it distinguishes between budget shortfalls that are the product of true economic emergencies from those that are the foreseeable result of years of fiscal mismanagement.

The governor's office has not responded to my request for comment, and the Department of Management referred me to Reynolds' staff. Ryan Foley reported for the Associated Press, "Reynolds' press secretary Brenna Smith said the governor's office is reviewing the lawsuit, which she called politically motivated."

When Fitzgerald pointed out the same legal problem in September, Smith asserted that Reynolds' action was consistent with the "purpose of the transfer law [...] to compare the last REC estimate to the previous." In her reading, Reynolds attained the authority to transfer emergency funds because the March 2017 revenue projections from Iowa's Revenue Estimating Conference had been 1.5 percent below the conference's previous estimates from December 2016. Good luck getting a court to interpret the law that way.

"Today’s action is being taken only after significant thought and consideration. The transfer of funds made by Governor Reynolds this past September was not in compliance with state law and the separation of powers laid out in the Iowa Constitution. As lawmakers, we have an obligation to protect the taxpayers of Iowa and hold the executive branch accountable to ensure our tax dollars are being spent according to the law.

The illegality of the Governor’s transfer was expressed beforehand to the Governor’s Office by the State Treasurer and, unfortunately, was ignored. Separately, the State Auditor is completing a more thorough inquiry to ensure the state’s books for FY17 are fiscally sound and responsible.

When the Legislature convenes next week, it has the authority to fix the Governor’s illegal transfer and update state law to further protect taxpayers in the future."

Republican leaders in the Iowa House and Senate will likely cover for Reynolds. It's not clear whether this lawsuit will be heard before the legislative session ends, probably sometime in April.

I am still skeptical that Roederer used sound accounting measures to arrive at the $14.6 million figure for the fiscal year 2017 shortfall. In early September, staff for the non-partisan Legislative Services Agency told reporters the LSA expected "actual fiscal 2017 receipts" to be $75 million or $76 million below the March 2017 Revenue Estimating Conference projections. The governor needs legislative approval for any transfer exceeding $50 million. I don't expect close scrutiny from State Auditor Mary Mosiman; she supports Reynolds and has already vouched for this year's budget as "responsible."

UPDATE: For a good example of the "he said/she said" frame's limitations, read O.Kay Henderson's report on this lawsuit for Radio Iowa. Excerpts:

Hall says the state budget deficit was caused by “years of fiscal mismanagement” and didn’t meet the law’s requirement that withdrawals from the Economic Emergency Fund happen during a downturn in the state’s overall economy. [...]

Brenna Smith, a spokeswoman for Governor Reynolds, says this “is a political lawsuit.” The governor’s spokeswoman says “everyone agrees the state budget needs to be balanced — which it now is.” And Smith added that legislators are “free to change the outdated transfer” law and the governor would “encourage them to do so.”

By characterizing current law as "outdated," Smith appears to have conceded that Reynolds ignored what Iowa Code says about when the governor can order an emergency fund transfer without legislative approval. Who's being political?

Henderson's story did not mention that Fitzgerald flagged this legal problem in September. It also also misstated the key point of the lawsuit. Hall isn't claiming the law allows withdrawals from the Economic Emergency Fund only during an economic downturn. The petition says, "In fiscal year 2017, the difference between the revenue estimating conference’s third quarter estimate of general fund receipts ($7.107 billion) and the actual net general fund revenue ($7.096 billion) was only $11 million, which is only .15%, which is short of the .5% threshold set forth in Iowa Code section 8.55."

SECOND UPDATE: Should have mentioned that this too-clever-by-half scheme to avoid calling a special legislative session might have been avoided if Reynolds had hired policy wonks to run her office, instead of campaign war room types (Chief of Staff Jake Ketzner and Deputy Chief of Staff Tim Albrecht).

The lawsuit arises from Governor Reynolds’ September 28, 2017, proclamation ordering Director Roederer to make a $13 million transfer from the Economic Emergency Fund to the General Fund. In his petition, Representative Hall claims that the transfer was illegal because the State’s budget woes were not due to an economic emergency, but instead from years of fiscal mismanagement. He contends that Governor Reynolds had several lawful alternatives to fix the budget, such as calling for a special session this summer, but she instead opted to unlawfully transfer monies from the Economic Emergency Fund.

“Today’s action is being taken only after significant thought and consideration,” said Representative Hall. “The transfer of funds made by Governor Reynolds this past September was not in compliance with state law and the separation of powers laid out in the Iowa constitution. As lawmakers, we have an obligation to protect the taxpayers of Iowa and hold the executive branch accountable to ensure our tax dollars are being spent according to the law.”

An electronic copy of the Petition is attached.

LATER UPDATE: Speaking at the Associated Press legislative forum on January 4, Iowa House Speaker Linda Upmeyer told reporters the governor had complied with the "spirit" but perhaps not the "letter of the law" on the $13 million transfer. That's a generous interpretation by a Republican ally. The law is clear. Reynolds was warned circumstances did not allow the fund transfer without legislative approval.

At the same forum, Reynolds said she believes her action "operated within the intent of the law," which she considers "outdated."

I expect rapid action by Republican lawmakers to give the governor cover on this issue, because if Hall's lawsuit goes to trial, a judge will read what the law says in plain English--not what Reynolds believes is its intent.

Reynolds answered "yes" to reporters when asked if she followed the law as written in transferring $13 million from the fund. The move allowed Reynolds to avoid calling lawmakers back for a special session.

Reynolds did not elaborate on her assessment but added: "I feel that we operated within the intent of the law." [...]

"The statute is outdated and the Legislature has the opportunity to come in and update it," she said. "And I would think that that's what they would want to do instead of filing a costly lawsuit."

House Speaker Linda Upmeyer, a Clear Lake Republican, said earlier Thursday she was open to changing the law. She appeared at odds with Reynolds but also supportive of her action.

"I do believe that Gov. Reynolds was entirely complying with the spirit of the law ... it was not, perhaps, the letter of the law. So we will be happy to change that," Upmeyer said.

Assuming Republican lawmakers amend the statute this year, I assume attorneys for the state will try to have Hall's lawsuit dismissed as moot. I welcome feedback from lawyers on whether that tactic is likely to succeed, given that Reynolds' fund transfer was not consistent with the law as written in September 2017.

JANUARY 8 UPDATE: A news brief produced by WHO Radio (which has a conservative editorial lean) misrepresented the situation by stating the governor "had to" transfer funds to balance the budget in order to avoid calling a special legislative session. More like, the governor illegally transferred funds because she did not want to call the legislature back to balance the budget.