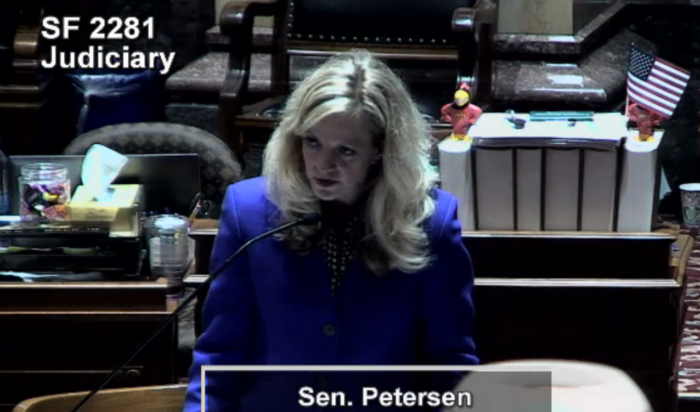 Iowa Senate Minority Leader Janet Petersen has been a champion of reproductive rights for years. Her plea to reject the most extreme anti-abortion bill ever to come to the Iowa Senate floor was one for the ages.

Senate File 2281 would forbid doctors from performing abortions “if a fetal heartbeat is detectable” other than “in the case of a medical emergency.” A physician violating the law could be charged with a class D felony. For this bill’s purposes (but not elsewhere in Iowa Code), a medical emergency is defined as “a situation in which an abortion is performed to preserve the life of the pregnant woman whose life is endangered by a physical disorder, physical illness, or physical injury, including a life-endangering physical condition caused by or arising from the pregnancy, but not including psychological conditions, emotional conditions, familial conditions, or the woman’s age.”

As Bleeding Heartland discussed here, a broad coalition including medical groups and the Iowa Board of Regents oppose the bill, which is clearly unconstitutional. A heartbeat can usually be detected around the sixth week of pregnancy. The U.S. Supreme Court’s 45-year-old Roe v Wade decision protected a woman’s right to choose an abortion during the first trimester.

Republican floor manager Amy Sinclair, the only woman in the Senate GOP caucus, was also the only senator to speak in favor of the so-called “heartbeat bill” during the February 28 floor debate. Three Democrats rose in opposition. You can watch the speeches by Senators Joe Bolkcom and Nate Boulton beginning at 4:57:00 and 4:59:50 on this video.

Petersen’s ten-minute demolition job was memorable, especially when she noted that prison inmates and even corpses and livestock would have more medical rights than Iowa women and girls under this bill. Senate Democrats released a transcript of Petersen’s prepared remarks on the abortion ban. I made minor edits to reflect the speech as delivered. Scroll down to watch or read in full.

All 29 Republicans and independent Senator David Johnson voted for Senate File 2281, while all 20 Democrats voted against it. The bill “faces an uncertain future” in the Iowa House, Brianne Pfannenstiel reported for the Des Moines Register.

Last year, House Republicans briefly tried to advance a fetal heartbeat abortion ban but reversed course after finding they did not have enough Republican support to pass such a bill.

When asked about the Senate’s fetal heartbeat legislation at a recent press conference, House Speaker Linda Upmeyer, R-Clear Lake, said House Republicans intend to focus on legislation banning parents from suing for “wrongful birth” if a doctor withholds information from them about fetal abnormalities.

That bill, passed on the House floor Tuesday [February 27], stems from a recent lawsuit in which an Iowa family said they were never informed of fetal abnormalities, which would have led them to terminate the pregnancy. The Iowa Supreme Court ruled that families could sue for wrongful birth unless the Legislature acts.

I believe every Iowa woman in our state should have the freedom to care for her body without government intervening.

I believe every Iowa woman should have the freedom to decide if and when she wants to become a parent.

Unfortunately, that is becoming nearly impossible with Republicans in control of the Iowa Senate.

It has been two rough years for Iowa women with Republicans in power.

Last year, every Republican in the Iowa Senate sponsored and voted for a bill that nearly destroyed Iowa’s Family Planning Network. Republicans forced Iowa women to find new health care providers. Republicans banned many of the state’s most highly qualified providers from participating in their GOP family planning program. Republican senators banned Iowa women from seeking medical care from doctors, clinics, and hospitals while they continued to go to them or send their own family them as part of their health insurance plan that Iowa taxpayers cover.

Republican Senators and staff were found guilty of creating a toxic work environment for former communications director Kirsten Anderson, which resulted in a $1.75 million settlement that innocent taxpayers had to cover the cost.

On top of that, Republican senators charged taxpayers millions of dollars more for their GOP family planning bill that provides less care to fewer women.

So now, Senate Republicans are back for more – forcing motherhood on Iowa women.

This bill impacts every girl and every woman in our state from the time they get their period to the time they take their last breath.

It’s hard to believe we are even having this debate on a piece of legislation that devalues the bodies and decision-making skills of Iowa women and girls.

Imagine if we included men in the Republicans’ new definition of medical emergency, saying the fate of male reproductive organs didn’t matter unless you were dying.

This bill doesn’t just impact women, it impacts girls. There are no age restrictions in this legislation. There is no exception for a 9-year-old girl who is a victim of rape. Under the Republican bill, you would force a child rape victim to have a baby no matter how young she is. That is unfathomable.

Senate Republicans refused to take up legislation to give victims of child sexual abuse more time to go after their perpetrators for civil damages – a bill that could have prevented serial perpetrators from raping more children.

Yet, in this bill Senate Republicans have no problem going after Iowa doctors, by threatening to put them in prison for terminating a pregnancy if they believe it’s in the best interest of the child.

Going after doctors who provide women’s health care is shameful. What doctor would want to practice in a state that threatens to put them in prison for doing what they believe is in the best interest of their patients?

This bill is a direct attack on women’s health care across the state. If this bill were to become law, our state may lose its only program for OB/GYNs at the University of Iowa – a highly successful program where one-third of the OBG residency graduates remain in Iowa to practice.

Even if they were able to keep their residency program, it would be a logistical nightmare to ensure our future doctors get the training they need to graduate. If there are no places to train future doctors in Iowa on how to safely do an abortion procedure, where will the U of I send its residents? They will have to go out of state. That brings extra costs, extra time, and extra headaches for residents.

What will that equate to for our state? It will mean fewer OB/GYN students choosing University of Iowa as a place where they’d like to attend medical school. It will mean fewer OB/GYNs choosing to practice in Iowa. Iowa is already ranked next to last in the nation for OBG physicians per capita, with two-thirds of Iowa counties not having a single OBG physician. We are only ahead of Arkansas.

When you lose doctors in rural Iowa, maternal health care outcomes suffer. Iowa is already dangerously low in our number of OB/GYNs. I don’t think any one of us wants our state to be known as a place with poor birth outcomes, more high-risk pregnancies, and unhealthy births that result in long-term health issues. Our state should be the safest place in the country to have a baby–not the most dangerous place in the country to have a baby.

We are already seeing the dangerous results of the GOP family [planning] bill that is costing taxpayers millions of dollars more, and resulting in less care for women and less access to family planning.

This bill, which is unconstitutional, will once again charge Iowa taxpayers with a huge bill. You’ve already charged them more than $3 million with last year’s GOP family planning bill and $1.75 million to cover the costs of the Senate Republican sexual harassment lawsuit. And now you are at it again with this bill, which will tie up our underfunded and understaffed court system and cost Iowa taxpayers millions of dollars.

This bill will not make our state a safe place to have a baby. In fact, it will do the opposite.

This bill won’t just impact Iowa women and girls who are forced into motherhood. It will affect all women and girls needing access to OB/GYNs and safe, accessible reproductive health care services in Iowa.

Please vote no. Your political power does not belong inside an Iowa girl’s uterus or the uterus of any Iowa women.