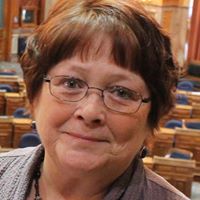 It is time for an Iowa crime victim rights constitutional amendment

State Representative Marti Anderson is a Democrat serving her third term in the Iowa House. Before that, she was founding director of the Iowa Attorney General’s Crime Victim Assistance Division for 22 years. -promoted by desmoinesdem

Some Iowa victim advocates have worked for a crime victim rights amendment for several decades. I’ve filed an amendment each of my three sessions in the House. There are two major differences this year.

Republican Representative Ashley Hinson, a former newscaster who witnessed the horror of victimization daily in her career, has become an advocate for the amendment (House Joint Resolution 2010). She and I are joined by Dr. Henry T. Nicholas whose sister, Marsy, was stalked and murdered by her ex-boyfriend when she was in college. He founded Marsy’s Law to help pass a victim rights constitutional amendment in California. The amendment was passed in California in 2008. Marsy’s Law became the strongest and most comprehensive Constitutional Victim’s Rights Law in the U.S. Dr. Nicholas now lends his passion and support to pass constitutional rights for crime victims across the United States.

Also, popular support is now firmly in support of an Iowa crime victim rights amendment. In January 2018, a poll was conducted in Iowa by Public Opinion Strategies, a national leading public opinion research firm specializing in public policy polling. The poll found 82 percent of Democrats, 88 percent of Republicans, and 86 percent of independents support putting the rights of crime victims alongside the rights of the accused in our state’s Constitution. Of the 45 percent of Iowans who said their legislators’ support FOR Marsy’s Law will affect how they vote in the election, 84 percent said they would be more likely to vote for a legislator who supports Marsy’s Law.

I was disappointed to read the article in Bleeding Heartland by Laurie Schipper of Iowa Coalition Against Domestic Violence and Beth Barnhill of Iowa Coalition Against Sexual Assault, who oppose the amendment. They minimize the importance of a constitutional amendment for the most basic rights of crime victims in the justice system. They fear that funding for community victim services will be reduced or flat-lined if the amendment passes. Their primary arguments against the constitutional amendment and my responses are below.

1. Coalitions: Iowa law already provides statutory victims’ rights protections in Chapter 915.
Iowa Code Chapter 915, Victim Rights, is a strong infrastructure of crime victim rights laws. However, a law can be amended or eliminated in just one year by the legislature and governor. To change, repeal, or add a new constitutional amendment takes five years. The amendment must pass twice in the legislature in two consecutive sessions -- a four-year period. It can then be placed on the ballot for a vote of the people. Back basic crime victim rights laws with a constitutional amendment gives them permanency and constitutional standing along with the rights of those accused of crime.

2. Coalitions: A constitutional amendment is the wrong mechanism for effectively supporting victims.
Only 15 states do not have a Crime Victim Rights Amendment in their Constitution. The state amendments give strength to protection of the rights of crime victims as they face the unfamiliar complexity of a justice system that is focused on defendants and offenders. Often motivated by the hope others will not be victimized, crime victims deserve to be treated with dignity and respect of their rights.

The 1982 President’s Task Force on Victims of Crime recommended crime victim constitutional amendments for states and at the federal level. Their report stated, “The criminal justice system has lost an essential balance. The guiding principle that provides the focus for constitutional liberties is that government must be restrained from trampling the rights of the individual citizen. Victims of crime have been transformed into a group oppressively burdened by a system designed to protect them. This oppression must be redressed.”

3. Coalitions: Legislation like Marsy’s Law undermines the systems and services that can better meet the comprehensive needs of victims of crime.
A constitutional amendment does nothing to undermine the existence or funding available to community services established for crime victims. All the rights in the proposal have been on the books for three decades. If there is a new cost to providing the rights, it is because victim rights laws have been ignored. It is a matter of justice that crime victims in the courts have constitutionally protected rights and procedures as do the accused.

For example, the 10th Amendment of the Iowa Constitution establishes rights of persons accused of crime and states, “In all criminal prosecutions, and in cases involving the life, or liberty of an individual the accused shall have a right to a speedy and public trial by an impartial jury; to be informed of the accusation against him, to have a copy of the same when demanded; to be confronted with the witnesses against him; to have compulsory process for his witnesses; and, to have the assistance of counsel.” Sentences and recourse of offenders are in the Iowa Code. Funding for corrections and public defenders are set annually by the General Assembly. Remedies and funding related to the Crime Victim Rights Amendment will be established in law and state budget just as those for defendants are.

I have been told and have witnessed many times that prosecutors, defense attorneys, and judges take legal rights with constitutional standing most seriously. Constitutional standing will give increased legal gravitas for a victim’s right to be notified, present, heard, safe, and to receive restitution from an offender for financial loss.

5. Coalitions: Marsy’s Law falls short of its promises because achieving justice for crime victims is a much broader goal than simply securing rights within the criminal legal system.
The amendment is not an either/or proposition -- either the amendment is passed or community victim services are funded. The proposed amendment will solidify justice for crime victims going through the justice system. There are additional victim rights in Iowa law for victims not involved in the justice system such as the right to confidentiality, to have an advocate, to have a sexual abuse exam paid for by the state, to choose whether-or-not to work with law enforcement, and more.

Victim service programs provide support and resources to nearly 65,000 victims each year. Some go to court, but most did not. Support, information, and advocacy are important to all crime victims when they choose or don’t have the option to go to court. These services are also critical for crime victims whose case goes through the court system.

The coalitions cite a 2012 summit convened by the California Attorney General to confront challenges in the field of victims’ rights to show a constitutional amendment is not a priority. A conclusion in the report of the summit stated, “…the greatest and most obvious challenge in advancing victims’ rights and services is the lack of sufficient resources to make the vision a reality.” The report does not imply the constitutional amendment, enacted four years earlier was a cause of the lack of funding. Justice system rights and adequate funding for community services are not mutually exclusive. Funding for services and constitutionally protected rights are both important to victim justice and recovery. Crime victimization is complex and requires a multi-pronged approach.

6. $5-10 million is spent by lobbyists passing Marsy’s Law in states. That’s more than the state of Iowa invests in sexual assault and domestic violence services combined. We're concerned that Marsy’s Law would divert resources away from systems and services that can meet the comprehensive needs of victims.

Dr. Nicholas came to the crime victim movement in a most horrible way when his sister, Marsy, was stalked and murdered by her ex-boyfriend at college. He founded an organization named for her and named the constitutional amendments he put his heart into after Marcy. It is offensive to me to imply Dr. Nicholas is wrong to invest his money in victim justice in any way meaningful to him. He is a homicide victim survivor who is using his personal funds in a way many believe is in the best interest of victims. I am honored and happy that Dr. Nicholas has turned his attention to Iowa. We must continue to increase the funds available to community victim services and to broaden the scope of services and victims we must serve.

The proposed amendment will give constitutional standing to five basic victim rights that have been in the Iowa Code for over three decades. Those rights include, the right to be notified, present, heard, safe, and request restitution.

Justice is not served unless crime victims are served. We must continue our fight to fully fund quality accessible crime victim services. At the same time, we must strengthen the rights and treatment of victims going through the justice system with a constitutional amendment. One is not more important than the other.