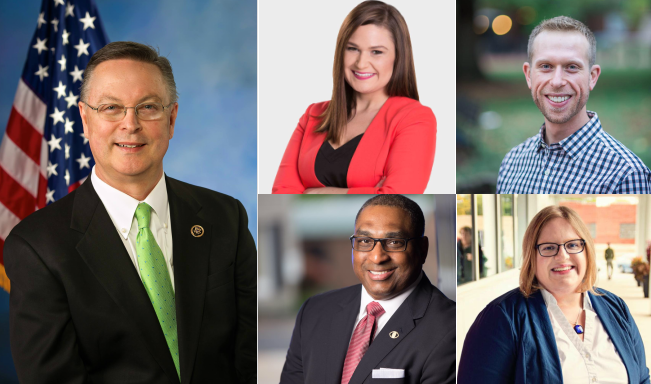 The latest fundraising numbers from Iowa's first Congressional district confirm what was already apparent: Representative Rod Blum is among the country's most vulnerable U.S. House incumbents, and Abby Finkenauer will be the prohibitive favorite in the June 5 Democratic primary.

Follow me after the jump for highlights from the first-quarter Federal Election Commission filings for Blum and his four challengers.

Blum received an additional $56,451.88 through a transfer from the "Protect the House" fund, which supports GOP candidates in 26 targeted districts. That fund transferred roughly the same amount to IA-03 Representative David Young's campaign. CNBC's Brian Schwartz noted this week that the billionaire Robert Mercer, one of the country's largest GOP donors, gave $5,400 to Blum's committee through Protect the House.

Blum's always been frugal when it comes to campaign spending and doesn't appear to have any staff working on his re-election effort yet. He reported just $24,148.88 in expenditures from January through March. The most costly line items were direct mail, fundraising consulting, and polling. As of March 31, Blum's campaign had $1,274,218.78 cash on hand and $600,000 in loans outstanding to the candidate, dating from a $500,000 loan in early 2017 and $100,000 that has carried over since the 2014 election cycle. Blum probably could loan himself more money later in the year if the need arises.

The top Republican super-PAC focused on House races, the Congressional Leadership Fund, announced plans this week to spend $10 million on digital advertising in 30 House districts, including IA-01. But that group left Blum's race off the list of 20 districts where it has already reserved $38 million of air time for television commercials.

Abby Finkenauer continues to lead the Democratic field in fundraising. Her campaign reported $428,720.82 in total contributions from January through March, of which $343,351.74 came from individuals and $85,369.08 from PACs or political committees, mostly organized labor or other U.S. House Democrats. She also raised an unusually large amount from political committees last year.

In addition, the joint fundraising committee Better Days Fund (a Democratic counterpart to the GOP's Protect the House) kicked in $53,211.37 to Finkenauer's campaign during the first quarter. You can view donors supporting her through that fund here.

This race illustrates why Bleeding Heartland has had a longstanding editorial policy never to write a post about fundraising based solely on selective information released by a candidate. Wait until the full report is public. An April 10 press release from Finkenauer's campaign touted "over $480,000 raised in the first quarter of the year." The FEC filing provides more context: more than a quarter of the $482,000.48 in total receipts came from PACs, political committees, or the Better Days Fund. That happened because Finkenauer is the preferred candidate of many labor unions and the Democratic Congressional Campaign Committee.

Don't get me wrong: Finkenauer's fundraising numbers are still impressive. To my knowledge, only two non-incumbent Iowa Democrats running for Congress have raised more from individuals during a quarter this early in the election cycle: Christie Vilsack (multiple times in 2011 and 2012) and Ravi Patel in the first quarter of 2015. (Patel ended that campaign a few months later.)

Finkenauer's campaign had a fairly high burn rate, with $131,431.28 in spending from January through March. Salaries were the biggest expense; a large staff by Iowa standards is organizing for Finkenauer across the district. Although she hasn't aired television commercials yet, her campaign paid for digital advertising and video production. A 90-second video called "Tough" began running online last week.

As of March 31, Finkenauer's campaign had $729,635.60 cash on hand, a very large number for a first-time Congressional candidate.

Thomas Heckroth is the only other Democratic contender in IA-01 in a position to fund a district-wide campaign before the primary. He won't be able to match Finkenauer's spending during the home stretch. His 1Q filing shows $56,940.48 in contributions, all from individuals. Another $1,884.00 in receipts came from selling an e-mail list to John Delaney's presidential campaign.

Heckroth's campaign spent $87,600.17 from January through March, more than it raised. About two-thirds of the expenditures paid for the short tv ads that launched in early March. He ended the quarter with $160,873.71 cash on hand.

Courtney Rowe is running a volunteer-staffed campaign, which puts her at a disadvantage compared to better-funded competitors. She raised $4,250.20 from individuals and spent $8,755.78, leaving $827.98 cash on hand at the end of the quarter.

Finkenauer will be heavily favored to win the primary, especially given her internal polling that showed her well ahead of other Democrats earlier in the year.

One question mark is whether Democrats not inclined to support Finkenauer will split among the other three candidates or coalesce around Heckroth. This week the California-based group Climate Hawks Vote endorsed Heckroth, saying,

Tom is running for Congress to stand up to the Trump administration and to flip a very winnable seat. Tom’s most recent work has been helping private businesses reduce their carbon footprint. Prior to that, he worked for Iowa’s long-term Senator Tom Harkin and President Obama’s Department of Labor.

Climate Hawks Vote only takes sides in primaries where there’s a clear contrast. Here, Tom faces a primary opponent whose website doesn’t say a thing about climate change, or even the environment, and who's both taken a stand for, and taken money from, the Dakota Access Pipeline.

did not respond to our requests for comment. She also signed the IUB [Iowa Utilities Board] letter opposing the independent environmental impact assessment and, shortly thereafter, told a local newspaper that it would be “irresponsible not to look at all ways” to transport crude oil through the state given the dangers of train derailments.

Former Iowa lawmaker Ed Fallon, one of our state's most dedicated pipeline opponents and climate activists, e-mailed his supporter list on April 18 with all of his Democratic primary endorsements. Excerpt:

Thomas Heckroth's opponent in the Democratic Primary, Abby Finkenauer, is a big supporter of the Dakota Access Pipeline, so this endorsement is easy. Heckroth’s stand on climate is solid. He writes, “Climate Change is also a threat to global security and must be a factor in United States foreign policy. Whether it is forced migration due to rising sea levels or whole cities running out of water, global security challenges will continue to crop up due to climate change.”

Thomas also writes, “As we transition away from fossil fuels, we must finally end the unnecessary and unaffordable subsidies that we provide to major fossil fuel companies. There is no reason why we should continue to incentivize coal, gas, and oil companies when we have the tools to move forward with clean, renewable sources of energy.”

You can read Heckroth's full statement on climate change and energy policy here.

Rowe has been emphasizing environmental issues since she began exploring a Congressional campaign more than a year ago. A delegate for Bernie Sanders at the 2016 state convention and an alternate at the Democratic National Convention, she is running on what might be called a Berniecrat platform. I would guess that her support in the primary takes more potential votes away from Heckroth than from Finkenauer.

Any comments about the IA-01 campaign are welcome in this thread. Two leading national election forecasters consider this race a "toss-up." The 20 counties in northwest Iowa contain 155,800 active registered Democrats, 139,554 Republicans, and 190,378 no-party voters, according to the latest figures from the Iowa Secretary of State’s office.