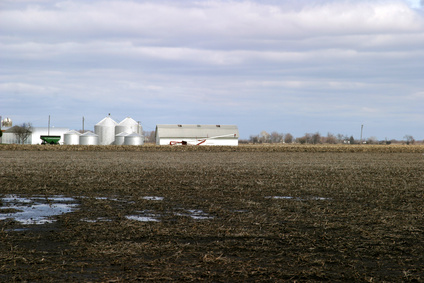 The U.S. House approved a five-year farm bill on June 21 by 213 votes to 211, with support from Iowa GOP Representatives Rod Blum (IA-01), David Young (IA-03), and Steve King (IA-04). Every Democrat present, including Representative Dave Loebsack (IA-02), voted against the bill, as did 20 Republicans (roll call).

A conservative bloc had voted down the same legislation in May, seeking to force House Speaker Paul Ryan to schedule a vote on an immigration bill drafted by Robert Goodlatte. The tactic worked, in the sense that House leaders brought Goodlatte's bill to the floor shortly before the farm bill. However, the immigration measure lacked the votes to pass the chamber.

According to Politico's Catherine Boudreau, the legislation was "the first farm bill to pass either chamber with only one-party support," because "Democrats revolted over its proposed changes to the Supplemental Nutrition Assistance Program, more commonly known as food stamps."

House Democrats walked away from the bill in committee because it would impose stricter work requirements on between 5 million and 7 million recipients of food stamps while pouring billions of dollars into state education and job training programs. [...]

The House farm bill would also tighten eligibility criteria under SNAP — changes that would result in some 400,000 households losing SNAP benefits. Thousands of children would also risk losing their enrollment in free and reduced-price school meal programs.

Republicans contend the plan would put people on a pathway to self-sufficiency. Democrats and anti-hunger groups say it would make it more difficult for millions of needy Americans to receive nutrition assistance, and also would invest in a state-run job training bureaucracy under SNAP that has yet to prove it helps people move out of poverty.

The Center for Rural Affairs highlighted some other problems with the House legislation.

“This bill undercuts rural communities in numerous and serious ways,” stated Anna Johnson, senior policy associate with the Center for Rural Affairs. “By passing this bill, the House of Representatives is demonstrating limited vision and investment in rural communities.”

The draft includes the elimination of the Conservation Stewardship Program, and would cut funds for working lands conservation by nearly $5 billion over 10 years.

“In addition to the troubling cuts to working lands conservation, we are very concerned that this bill would roll back existing payment limits and create new loopholes for very large operations to exploit,” Johnson said. “Senator Grassley has made clear he plans to bring proposals for payment limitations to the Senate floor – we are very disappointed that the House of Representatives chose to take the opposite approach.”

The bill also would eliminate funding for programs such as the Rural Microentrepreneur Assistance Program, the Value-Added Producer Grant Program, and the National Organic Certification Cost-Share Program.

I enclose below statements from Loebsack, Young, and King about the House farm bill. (I haven't seen public comments from Blum but will update as needed.) Tim Gannon, Democratic candidate for Iowa secretary of agriculture, posted on Twitter, "Sorry to see the House pass their version of the Farm Bill full of radical ideology rather than legislation that would be good for farmers & rural America. Fingers crossed the bipartisan Senate bill will be the blueprint for final passage." UPDATE: Added a longer statement from Gannon at the end of this post.

The Senate will likely pass its farm bill during the next two weeks. That legislation "would not seek new work requirements or make significant changes to eligibility standards for SNAP." Its biggest innovation is language to "remove industrial hemp from the list of controlled substances under federal law." The Center for Rural Affairs characterized the Senate bill as a "mixed bag"; click through for details on various provisions.

Members of the Senate Agriculture Committee approved the farm bill on June 13 by 20 votes to 1. Iowa's own Senator Chuck Grassley was the lone dissenter, "because his amendment to limit subsidy payments wasn't added to the proposed bill." He said in this written statement,

“Farm programs should provide temporary, limited assistance to farmers when there’s a natural disaster or an unforeseeable, sudden change in market prices. Setting sound, enforceable limits to farm safety net payments is a straightforward way to exercise fiscal responsibility and close loopholes that exploit the intent of farm programs that allow some non-farmers to game the system and take resources away from real, working farmers. I’ve been an advocate for making these reforms for more than a decade, so you can imagine my disappointment that they weren’t included in the committee’s legislation. I intend to offer an amendment on the Senate floor to include commonsense payment limits in the 2018 Farm Bill. A similar amendment passed the Senate in the last Farm Bill and should pass again.”

Grassley spoke earlier this week at the Heritage Foundation about the importance of fiscally responsible reforms to the Farm Bill. Grassley also wrote an op-ed about his work to make the 2018 Farm Bill more fair to farmers.

Assuming senators approve a farm bill by July 4, as expected, a conference committee would have nearly three months to work out a compromise before the current farm bill expires on September 30.

Representative Dave Loebsack didn't issue a statement after the June 21 vote, but his press release from last month explains why he didn't support the bill:

“House Republicans today showed they care more about being partisan than passing a farm bill to support Iowa’s farmers and rural communities. In what has historically been done in a bipartisan manner with a rural-urban coalition, this farm bill has devolved into a partisan food fight. This bill did not go far enough, nor make the necessary investments in providing our farmers and rural communities in Iowa with the tools they need. Farmers are facing some of the lowest farm incomes in years and this partisan farm bill does little to provide economic benefit or market certainty in rural communities.

“While there are many things in this bill that I support, I was unable to support it today because this bill is too extreme. For example, the elimination of the Energy title goes against our rural priorities. This title supports many renewable energy and energy efficiency investments made by our farmers and small businesses, such as REAP. This initiative has always been incredibly popular and has more people interested in it than funding available.

“I am also disappointed that this bill does not raise reference prices at a time when farm incomes are falling. Increased reference prices would go a long way toward providing greater assistance to farmers in times of low prices. Additionally, this bill cuts $800 million from conservation programs that help farmers care for the land and soil. On top of that, this farm bill eliminates important crop insurance and risk management education efforts that protect farmers in times of an emergency.

“I feel as though this whole process was truly a missed opportunity to support rural Iowa while making investments that put farmers first. It is time to go back to the Ag Committee and craft a bipartisan bill that can actually pass both chambers and be signed into law. But most importantly, we have to have a farm bill that puts farmers first.”

"The Farm Bill includes important provisions for farmers from crop insurance to addressing farmer suicide and I fought to make sure Iowans' priorities were included in the bill," said Congressman Young. "The WATER Act will help farmers find the best practices to protect water quality and improve soil health and the STRESS Act will help farmers struggling with their mental health get the resources they need."

Also included in the Farm Bill was the creation of a Food Loss and Waste Reduction Liaison at the Department of Agriculture. Congressman Young co-founded the Food Waste Caucus as a way to combat hunger and participated in a food waste roundtable with Agriculture Secretary Sonny Perdue.

Washington, D.C.- Congressman Steve King, a member of the House Agriculture Committee, released the following statement following House passage of HR. 2, the Agriculture and Nutrition Act of 2018 (Farm Bill). The Farm Bill contains several of Congressman King’s initiatives, including legislation he introduced, the Protect Interstate Commerce Act (PICA), which prevents activist states like California from unconstitutionally regulating interstate commerce in agriculture by imposing regulatory hurdles on other states. The Farm Bill passed the House of Representatives this afternoon on a vote of 213-211 with Congressman King voting in favor of the bill.

“The rural economy is hurting, and we need to get the House’s Farm Bill enacted into law as quickly as possible to ensure a vibrant farm economy that will protect our family farms,” said King. “This farm bill safeguards the Crop Insurance program, increases funding for important export programs, and furthers agriculture research being done at Iowa State University. It also includes my PICA provision that will ensure Iowa’s agricultural products are not denied access to some of the nation’s largest markets. This bill is too important to our rural communities to be left sitting on Senator McConnell’s desk. I encourage the Senate to pass it quickly so that President Trump can sign it into law and bring rural communities the assurances they seek.”

“I am disappointed that the House passed an extremely ideological Farm Bill yesterday along party lines. Farm Bills are too important for all Americans to become litmus tests. Due to the Trump Administration's approach to trade and the EPA’s issuance of waivers that damage the Renewable Fuels Standard, farmers and ranchers need the certainty of a strong safety net that Farm Bills usually provide. Yet, because House Republicans followed such a partisan process, this Farm Bill does not enjoy the robust support it should. The House version cuts much needed conservation funding that helps Iowa farmers continue to implement practices that improve soil health and enhance downstream water quality.

“The GOP did not stop there. They eliminated the Energy Title which helped many Iowan farmers improve their farm operations over the last decade through efficiency projects. And, notably, they cut nutrition assistance. This bill seeks to sever the important rural/urban coalition of lawmakers who historically worked together to craft Farm Bills that gain bipartisan support, not just that of one party.

“Next week, the Senate will take up consideration of their version of the Farm Bill, one which has been developed in a bipartisan manner and enjoyed overwhelming support in the Senate Agriculture Committee. The leaders and members of that Committee show us the two parties can work together to craft strong legislation. The Farm Bill plays a unique role in our economy and in the everyday lives of countless Americans. Rural or urban, we need a Farm Bill that provides our farmers a strong safety net, supports those in need of assistance, and provides rural America with the programs that help improve local economies and communities.”