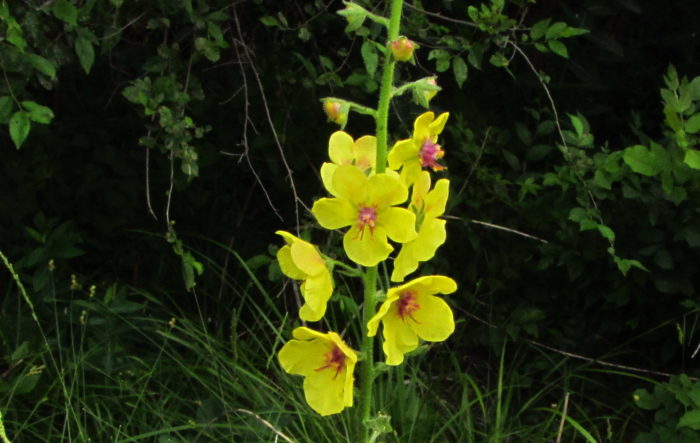 When I first photographed today’s featured wildflowers two summers ago, I hoped I had found a new (to me) native species. A friend thought the flowers might be Canada frostweed. Alas, John Pearson of the Iowa Department of Natural Resources confirmed the ID as a weed with origins in Eurasia.

Moth mullein (Verbascum blattaria) has become widespread throughout the U.S. and Canada. According to the Illinois Wildflowers website, the plant thrives in sub-optimal habitats, such as “pastures, abandoned fields, vacant lots, irregularly mowed lawns, areas along roadsides and railroads, and gravel bars along rivers. It prefers highly disturbed areas and is not invasive of natural areas to any significant degree.” Indeed, I’ve never seen moth mullein on a native or restored prairie. I took all of the enclosed pictures along the Meredith Trail between Water Works Park and Gray’s Lake in Des Moines, disturbed ground that was once a rail line.

Though my editorial bias favors native plants, Iowa wildflower Wednesday has occasionally showcased non-natives, even some considered undesirable weeds. After last week’s red, white, and blue extravaganza, I felt like posting pictures of pretty yellow blossoms today. (White is supposedly a common color variation for moth mullein flowers, but I’ve only ever seen the yellow variety.)

The colonies of moth mullein stand out in early summer, when little else is blooming on this stretch of the Meredith Trail.

The contrast between the petals and “reddish-purple stamens with orange tips” catches your eye. 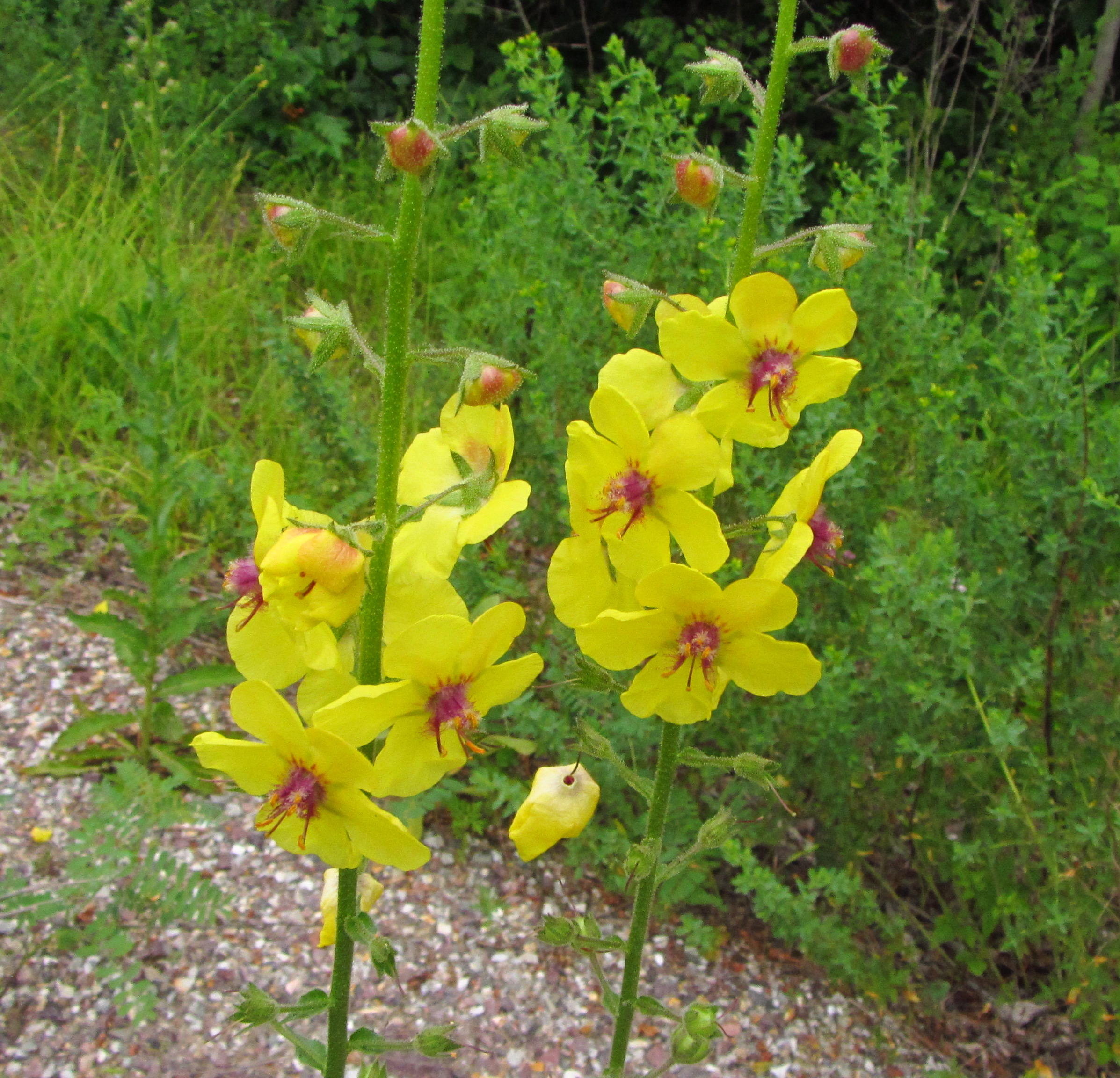 The Illinois Wildflowers site states, “In dry poor soil, this plant can be rather small, while at sites with fertile soil and more moisture it can become rather large.” I’ve seen many plants that were less than two feet tall. 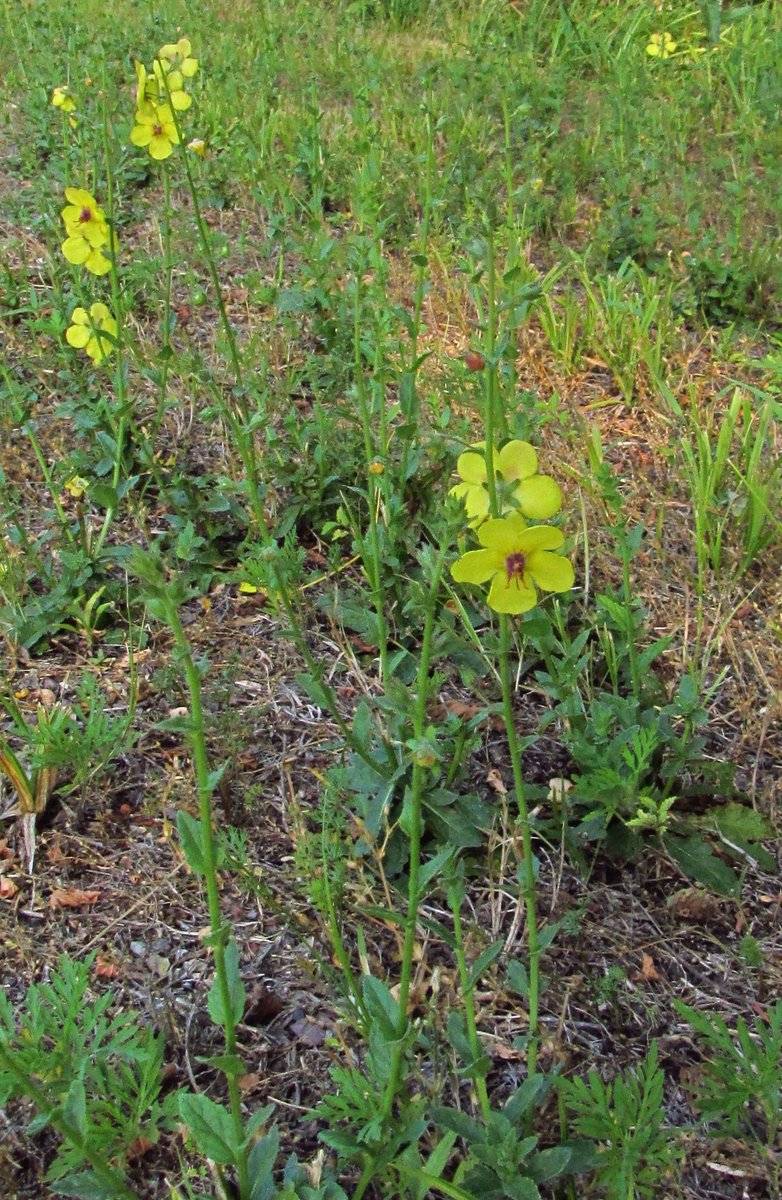 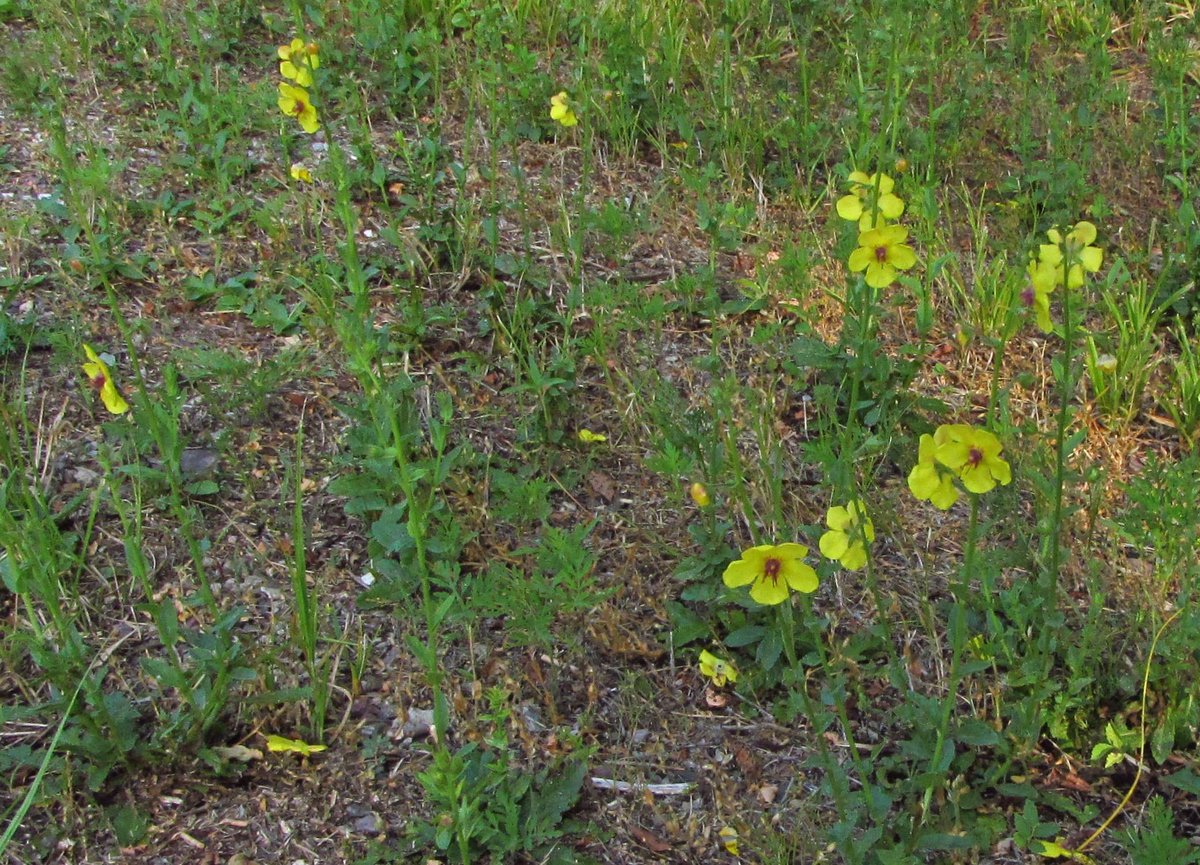 While other plants are nearly as tall as I am. 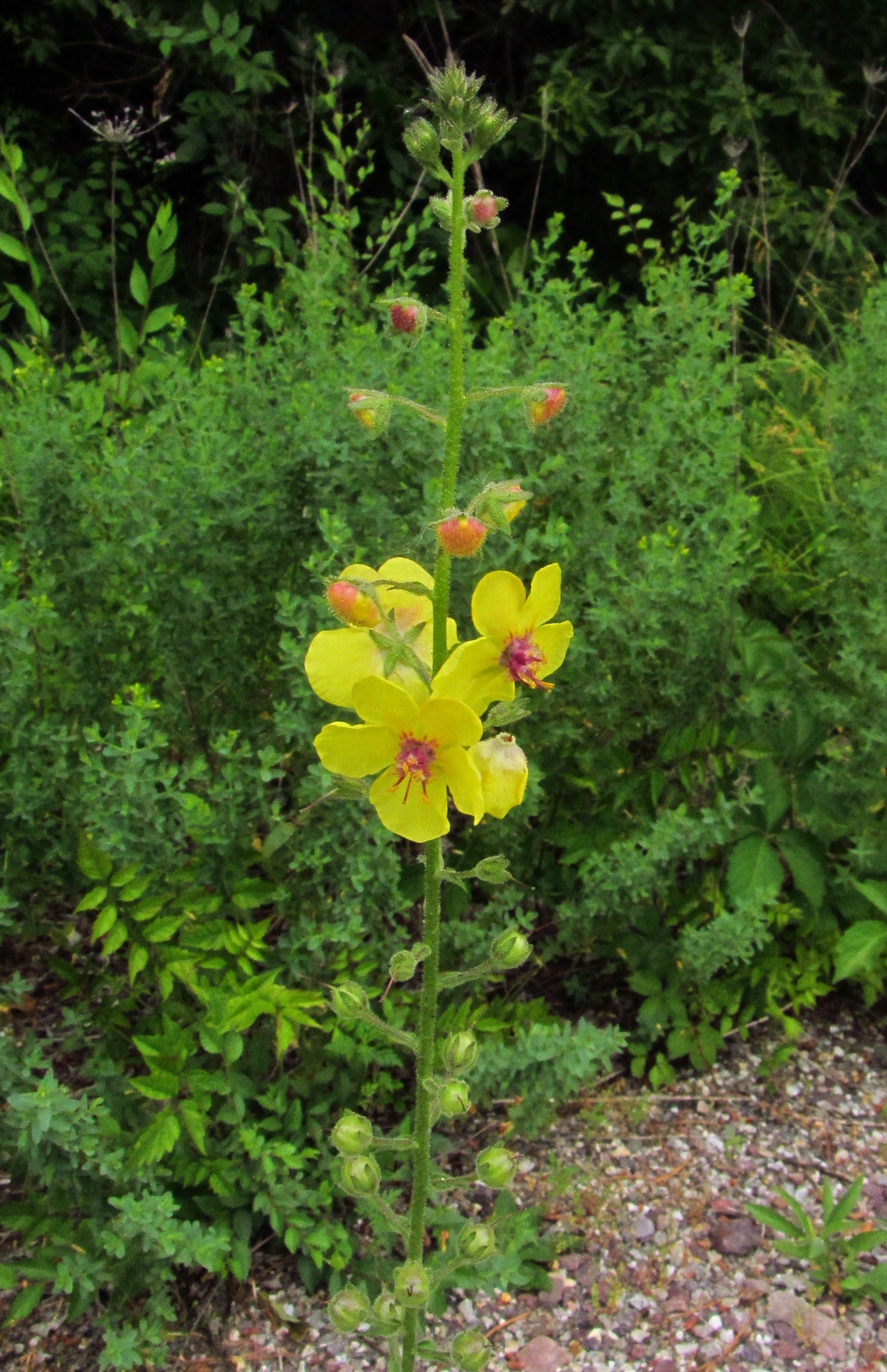 Moth mullein starts blooming from the bottom of what looks like a stem (technically, a raceme). In early June, many unopened buds were above the flowers on these plants. 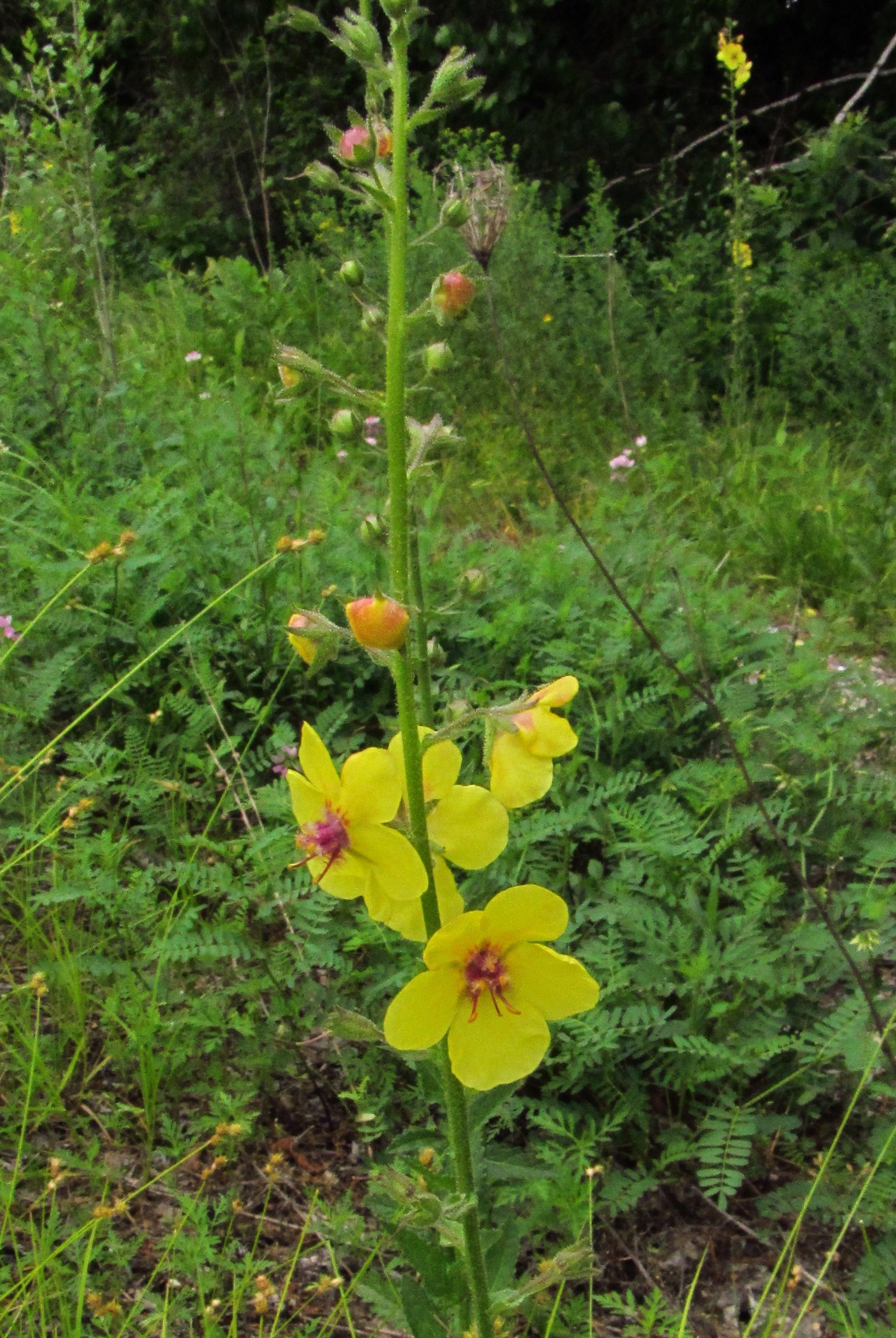 You can see seed capsules forming below the flowers on these plants.