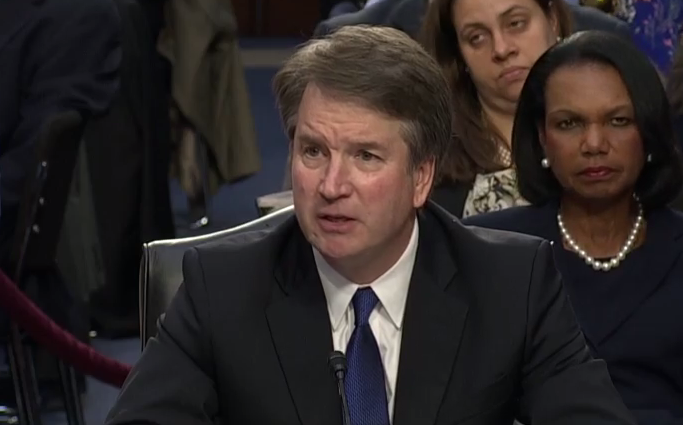 I should also say that I cannot – nor would I presume to – speak for or about people who identify as gender non-binary. I endeavor to understand and appreciate their worldview, but there is no way for me to share it. I can sympathize, perhaps, but not empathize. And so I speak only from my own lived experiences.

At the same time Judge Brett Kavanaugh and Dr. Christine Blasey Ford were attending their fancy east-coast private schools, so was I. Mine was roughly four hours up I-95 from where they were, but the atmosphere was the same: mostly wealthy, mostly white kids in corduroys, Lacoste sweaters and Topsiders taking the educational opportunities their genetic luck had afforded them. Mine was a co-ed boarding school, but the one I had attended before, for middle school, was all boys, like Kavanaugh’s. I am all too familiar with the culture.

Over my high school years I had three “steady” girlfriends. All three were wonderful young women and they liked me, at the time, at least as much as I liked them. There was plenty of “making out” (as we called it back then), and some things that went further. All of it was consensual, or it certainly seemed so to me at the time and I’d like to think those women would concur to this day. If they do not I sure hope they’ll tell me.

Years later I learned of stories such as a teacher there who sexually abused a student over many months. and a friend who had been raped at 15, a year or two before she and I had met. I myself experienced a form of sexual assault from male friends, something I’ve never spoken of before but that I’ve coped with fairly well. Perhaps that ability to cope, too, is my privilege at work. All this is to say there was a lot of sexual malfeasance going on that was kept well hidden.

College for me was even more free-wheeling, and before I started dating the magnificent person who is now my wife of nearly 32 years, I “got around” a little bit. All of those activities were consensual as well.

I categorically believe that each and every encounter was entirely consensual. That does not necessarily mean that they were. There was often alcohol involved, and from this distant vantage point, it seems entirely plausible that at least one of us may have been doing something they would not have when sober. I may owe an apology and just not know it.

One of many lessons I have learned over the years is that the word “if” should never be anywhere near the words “I’m sorry.” But how does one apologize for something without knowing whether or not it is called for? The closest I can get is that I’m profoundly sorry to anyone I hurt. Though even that seems to obfuscate.

A story resurfaced recently about Senator Cory Booker, regarding a confession he had written many years ago, a college-age epiphany about a high school encounter. Recently right-wing bloggers dug it up to try to distract attention from the allegations of Dr. Ford.

“But the skeleton in Booker’s closet seized on by outlets such as Fox News and the Daily Caller wasn’t really in his closet. The senator himself chose years ago to air the issue, marking a notable contrast with instances in which accusations of impropriety burst forth as a result of media investigation or opposition research.”

This kind of lazy oppo research only demonstrates that among the fundamental differences in the two broad political factions in this country is the right’s lack of compassion and inability to recognize their own culpability in any situation, especially this one. And yes, I know that no distinction is absolute. Nevertheless, this one holds up.

My sense of guilt, or lack thereof, is my problem alone as far as that goes, unless of course I actually did cross some lines which to this day I am still not aware of. But those problems of mine do not even begin to approach the sort of pain that so many women, likely all women, have to cope with every day. And the cause of that pain lies with one group of people: Men. Not some particular subset of men. All men. We have all been complicit, in one way or another. And fellas, if you think I’m wrong you better check yourself.

I try to use my power and privilege to be of service to others, with varying degrees of success, and am constantly frustrated by how feckless it can be. All too gradually, though, with exasperating sluggishness, our culture is improving. Important movements like #MeToo and #TimesUp might make it seem like it’s getting worse, but it’s not. It was always that bad, it just hadn’t been brought into the light. The first step to solving a problem, as they say.

I am deeply sorry for any hurt I have caused, even and especially the hurt I do not know about. I hope those people will come and tell me so that I can share my apology more personally. Until then, I bid you all strength and peace.

This commentary originally appeared on the author's blog.