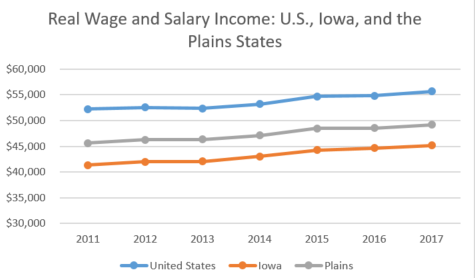 Dave Swenson is an associate scientist in Iowa State University's Department of Economics. -promoted by desmoinesdem

Elections inspire economic promises. Whether those promises are realistic or not usually doesn’t matter. It is the economic narrative that matters, and if you hit the right chord, as the Bill Clinton campaign found with “it’s the economy, stupid,” you can milk that for all it is worth to swing an election in your favor.

For a time things looked promising. Robust farm profits were driving strong demand for machinery and other capital investments on the farm, which supported both Main Street and manufacturing recovery. Iowa’s already strong wind energy industry continued to expand. There were huge fertilizer plants under construction on both sides of the state. Iowa had become a popular place to site data centers. A dime was added to the gas tax to boost road construction. And a controversial pipeline bisecting the state diagonally requiring hundreds of workers was laid in the ground.

Since 2011, Iowa has grown slower than all neighboring states, even perpetually beleaguered Illinois. Minnesota leads by a large margin. Iowa started out strong, but by 2015 growth had flattened out. It has much catching up to do. [Source: BLS. Quarterly Census of Employment and Wages]

Real wages have been rising in the U.S., in the Plains states, and in Iowa. The real gain for the average Iowa wage earner comparing 2017 with 2011 was 9.2 percent. This rate of increase led the national and the Plains states rates of gain, so we can chalk that up as a good outcome.

Nonetheless, in 2017 the average Iowa worker made just 92 percent of the Plains states average and 81 percent of the national average. [Source: BEA Annual State Personal Income and Employment]

Finally, compared to all states, Iowa’s overall job growth has been disappointing.

We know that Iowa lagged all of its neighbors, but how did it do compared to all of the states? The percentage gain comparing 2011 with 2017 found that Iowa ranked 46th in the nation. The nation grew by 11.4 percent, but Iowa posted a 4.8 percent growth. Surprisingly, even Kansas, the nation’s supply side experiment disaster, outgrew Iowa. [Source: BEA Annual State Personal Income and Employment; Implicit Price Deflators for Gross Domestic Product -- Personal Consumption Expenditures] 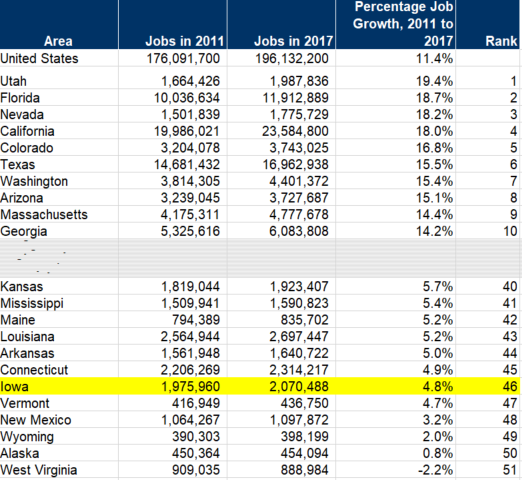 Iowa has a range of economic issues that it must confront. It has granted massive amounts of tax subsidy to new and existing businesses over the decade, but the payoff has been underwhelming, and those subsidies are undermining state-supplied public goods. Regionally, most of its nonmetropolitan areas, especially its mid-sized cities, have posted disappointing recoveries, and rural depopulation continues unabated.

Iowa is doing many things in the name of economic development, but the one thing that it is not doing is succeeding.